Accessibility links
Telmary Diaz: A Cuban (Rhyming) Revolution With a powerful and flexible delivery — and a globetrotting ear for beats — the rapper is one of the artists leading the hip-hop revolution in Cuban popular music. She talks with host Maria Hinojosa about her latest album, A Diario.

Songs from 'A Diario' 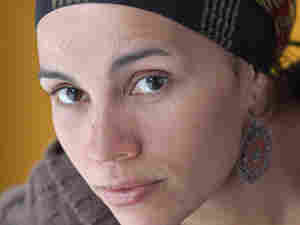 Telmary Diaz — singer, street poet, rapper — is one of the leaders of the hip-hop revolution in Cuban popular music.

Of course, the country's musical past is not forgotten. Diaz and her contemporaries take the rumba and the Son of Cuba, and add in the sensibility and style of hip-hop, funk and jazz.

The Toronto-based artist speaks with host Maria Hinojosa about her latest album, A Diario.

Though Cuba is often viewed as culturally isolated, Diaz's music reflects rhythms from around the world. "You can be surprised how many styles you can find in Cuba," Diaz says. "You can find in Cuba the ska, drum 'n' bass, I don't know, it's so many different kinds of music. ... Even when everybody thinks that Cuba is, you know, salsa, timba, Buena Vista Social Club, there is a lot of different movements of rock and punk. So everybody's open to new music all the time — that's what's happening."

Female rappers are greatly outnumbered in most hip-hop communities, and the Cuban scene is no different. But Diaz has managed to stake a claim, she says, by staying grounded in her identity.

To match her internationally-influenced beats, Diaz has developed a flexible delivery, capable of spitting powerful, rapidfire verses. But she says she also strives to maintain a slower, more laid-back style.

"I think it's also part of my style to be also slow, to be smooth," Diaz says. "Because one thing that I didn't like from the hip-hop movement sometimes is that they like when women [are] aggressive like them. So what's the point? ... I use my language, I use my soft part also to communicate and to provoke, to transmit my feelings."

Those feelings are often overlaid by socially-conscious messages. Diaz says she wants to convey both modernity and spirituality in her music, as in the song "Spiritual Sin Egoismo."

"How important is it to be spiritual in this world that is so crazy," Diaz says. "I mean, what we are doing with our planet is crazy. So I think the best we can do is try to fix it from inside of ourself, and try to bring our spirit to our life."