Accessibility links
In 'Stop Loss,' a Soldier's Rocky Return from War Fresh Air film critic David Edelstein reviews Stop Loss, a film about a decorated Army sergeant (Ryan Phillippe) who resists an order to serve another tour of duty in Iraq on the grounds that he has already fulfiled his contract with the military.

Listen
In 'Stop Loss,' a Soldier's Rocky Return from War 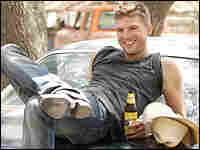 Brandon King (Ryan Phillippe) returns from the Iraq war to his home in Texas, only to find that the Army is sending him back into battle in Stop Loss. Frank Masi/Paramount Pictures hide caption 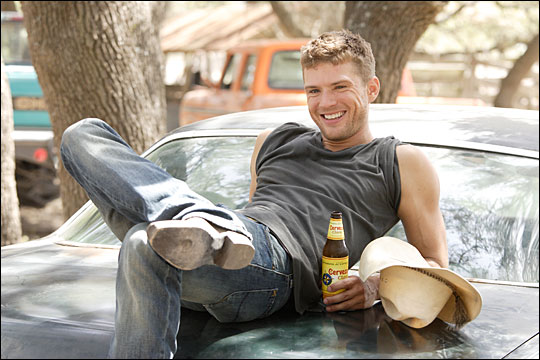 Brandon King (Ryan Phillippe) returns from the Iraq war to his home in Texas, only to find that the Army is sending him back into battle in Stop Loss.

'Jeanie Threw Me Out'

'I Shoulda Let it Bit You'

'Married to the Army'

At first glance, Kimberly Peirce's Stop Loss doesn't bear much resemblance to her momentous debut Boys Don't Cry, the story of a young woman who pretends — joyfully — to be a man and, when she's discovered, is raped and murdered. But the films are connected: Peirce has a knack for getting inside the heads of young men, for illuminating their bonds and rituals, in a way that should be the envy of male directors.

Last year's Iraq and war-on-terrorism movies tanked, and you wouldn't know this is a political film from the posters, which feature four young people staring into the camera like John Hughes characters contemplating the senior prom. But in a sometimes live-wire, sometimes ungainly way, Stop Loss evokes the pain of young American cowboy types who've lost all sense of autonomy.

The movie centers on three Texas soldiers, good ol' boys, who return from Iraq right after an ambush that left some of their buddies dead and maimed, and another grimly stoic after inadvertently killing women and children.

That's the opening sequence, and Peirce makes you understand the adrenaline-fueled hyperawareness of these men at a checkpoint as they almost fire on a family speeding toward them, then the unreality of the moment when insurgents in another speeding car suddenly open fire on them. They make split-second and not-too-wise decisions as the insurgents melt into civilian crowds.

And when it's all over and they roll into Texas on a bus, ready to be discharged, you get a palpable sense of how wound up they are--how they're itching to get very, very drunk and have crazy sex and court oblivion. They barely make it through the parade and the welcome speech of a U.S. senator before they're throwing back shots and retching and punching people out.

The first night home, Tommy, played by Joseph Gordon-Levitt, gets thrown out by his wife. Steve, played by Channing Tatum, backhands his fiancée, and begins to dig a trench in the yard while screaming he's under fire. Brandon, played by Ryan Phillippe, seems the most stable until he goes back on base to get his discharge papers — only to discover he's going to be sent back to the war zone, courtesy of a policy the military calls "stop-loss."

Phillippe has never struck me as much of an actor, but in Stop Loss he's very impressive — convincingly edgy and disoriented. He tells his commanding officer no, he's not going back. He punches out two guards and goes AWOL. He can't believe what's happening, and neither can his mother, played by Linda Emond, or Steve's fiancee, Michelle.

Michelle does drives Brandon to Washington, where he hopes the senator who once promised him the world will stop the stop-loss.

It's during Michelle and Brandon's road trip that Stop Loss loses momentum. There is lots of talk and lots of shots of their car going over bridges. But this is the bitter core of the film, an odyssey that should be crawly and discomfiting: a visit to the family of a dead comrade; to their hospitalized buddy Rico (Victor Rasuk), who's blind and has lost one arm and two legs; and to a fleabag motel where another AWOL stop-lossed soldier hides with his wife and sick child.

The young Australian actress Abby Cornish makes Michelle — potentially a thankless role — a vivid observer. She's struggling to understand what Iraq and stop-loss — a changing of the rules in mid-stream — means to men who thought that in war you knew who the bad guys were, and that when you were out you were out. Brandon has no real recourse, and Peirce has no answers. The power of the film — and this is no joke — is that it shows him between Iraq and a hard place.