Accessibility links
'The Tudors' Battles with the Truth The show joins Rome and Deadwood in a string of TV programs dramatizing important chapters in history. These programs don't always get the facts right, but does it really matter?

Listen
'The Tudors' Battles with the Truth

Did John Adams actually defend the Brits? Test your knowledge of historical vs. TV fact in this pop quiz. 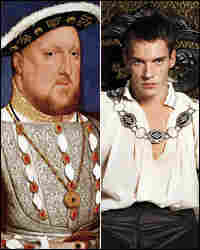 The real King Henry VIII, depicted here by Hans Holbein the Younger in 1536, had red hair, a beard and got pretty hefty in his later years. Jonathan Rhys Meyers, who plays Henry in Showtime's The Tudors, has brown hair and the body of a GQ model. The Gallery Collection/Corbis, Courtesy of Showtime hide caption

The second season of Showtime's The Tudors kicks off Sunday night. The show joins Rome and John Adams in a string of TV programs dramatizing important chapters in history. The lack of accuracy, however, is driving some history buffs crazy.

In the first season of The Tudors, King Henry VIII, played by the strapping young Jonathan Rhys Meyers, marries off his sister Margaret to the King of Portugal. In real life, the king had two sisters, not one, says Retha Warnicke, author of a book on family politics at Henry VIII's court. Warnicke notes that there are plenty of other infuriating jousts to reality.

Does it really matter? Showtime, well aware of its deviations from fact, thinks not.

"My first duty is to write a show that's entertaining. I wasn't commissioned by Showtime to write a historical documentary," says Michael Hirst, the show's writer. "We didn't bother to put Johnny, Jonathan Rhys Meyers, in a red wig and make him fat and put a beard on just because then we'd say, 'Oh, look that's Henry VIII!' We wanted to get closer to the spirit of the thing, to a kind of reality."

How do the events and people in The Tudors, Rome and John Adams compare with the facts?