Accessibility links
Mohammed Confession Leaves Room for Skepticism Khalid Sheikh Mohammed, seen as the mastermind of the Sept. 11 attacks, is said to claim responsibility for more than 30 major crimes and plots. A transcript of a secret military hearing details his confession. Is he over-inflating his role? 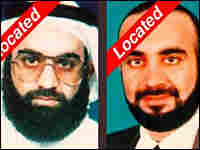 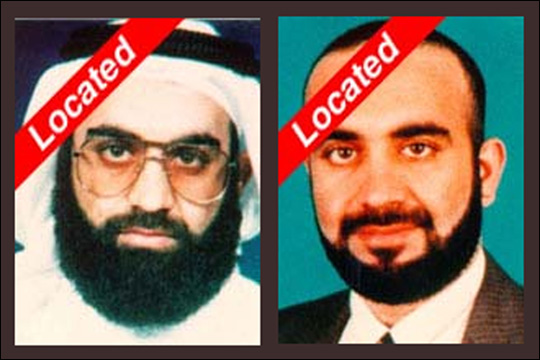 These undated Federal Bureau of Investigation (FBI) handout photos of suspected al-Qaida commander Khalid Sheikh Mohammed were marked with the word "Located" after Mohammed's arrest on March 1, 2003, in Pakistan.

*The Defense Department on Thursday issued a revised transcript to include Khalid Sheikh Mohammed's confession that he beheaded Wall Street Journal reporter Daniel Pearl in 2002.

Al-Qaida suspect Khalid Sheikh Mohammed confessed to United States officials that he was involved in the planning of, or support for, 31 terror plots. But observers question his claim to be the mastermind of almost every al-Qaida plot in the last 15 years.

The confession was contained in a transcript of a Guantanamo Bay, Cuba, hearing for Mohammed, which was released Wednesday night by the U.S. military. Mohammed is being held with other terrorism suspects at the U.S. military base there.

The plots claimed by Mohammed included thwarted assassination attempts and never-implemented bombings against the Sears Tower in Chicago, the Empire State Building in New York, the New York Stock Exchange, the Panama Canal and, in London, Big Ben and Heathrow Airport.

He also took full credit for the attacks on New York's World Trade Center in 1993 and 2001.

The 9-11 Commission said Mohammed had an inflated view of himself, cultivating an image as a super-terrorist. Some observers believe that a sizable ego has led him to claim credit where credit isn't due.

Mohammed asserted he was telling the truth about his activities when he appeared before the Guantanamo military panel that heard his confession.

Mohammed was moved to Guantanamo in 2006, after several years in custody in secret CIA prisons.

In an oral statement, recorded in four single-spaced pages, he rambled and drifted. He did say he regrets that nearly 3,000 people died in the Sept. 11 attacks, and particularly regrets the children's deaths.

The panel asked him if his confession was made under duress. He said that he was tortured in the CIA prisons, but that this statement at Guantanamo was made freely.

The officers interviewing Mohammed said his allegations of torture would be investigated.

No journalists were present at the hearing. All of the information about Mohammed's confession comes from partially redacted transcripts released by the U.S. military.