Accessibility links
Life in the 'Burbs: Heavy Costs for Families, Climate Millions of Americans have moved to the suburbs over the past 60 years. They gain a bigger house, but until recently, few were aware of the impact those choices had on the environment.

Listen
Life in the 'Burbs: Heavy Costs for Families, Climate

This is the first in a two-part report.

Read Part 2 of This Report 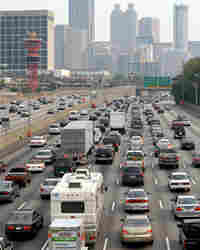 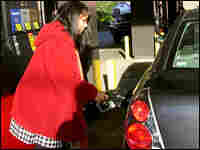 Michelle Carvalho fills up the 20-gallon tank in her Nissan Altima once every five days or so. The amount of gas she and her husband burn is the biggest reason the family's greenhouse gas emissions have more than doubled since they moved from the city to the suburbs. Elizabeth Shogren, NPR hide caption 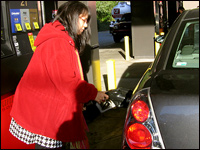 Michelle Carvalho fills up the 20-gallon tank in her Nissan Altima once every five days or so. The amount of gas she and her husband burn is the biggest reason the family's greenhouse gas emissions have more than doubled since they moved from the city to the suburbs.

Millions of Americans have moved to the suburbs in the past 60 years, drawn by the lure of larger houses and cheaper prices. But until recently, few were aware of the impact those choices had on the environment.

Outside metropolitan Atlanta, one of the nation's most congested cities, Michelle Carvalho's dreamhouse is 3,000 square feet. It has five bedrooms, a two-car garage and a big yard.

Her 16-month-old son's day care is 10 minutes away. But Carvalho's real commute, to her job as a cancer prevention researcher at Emory University, can take anywhere from an hour to an hour and a half, depending on traffic.

The tank in her Nissan Altima holds 20 gallons, and she fills up once every five days or so. So does her husband, Galileu.

When the Carvalhos lived in the city, they only had one car. But when they moved to the suburbs, they needed two. Both get a lot of use. The amount of gasoline they burn is the biggest reason the family's greenhouse gas emissions have more than doubled since they moved.

The average Atlanta resident with a job drives 66 miles every day. In fact, people here drive so much that if you added up every commute and every trip to a store or soccer practice on just one day, you'd get a number that's larger than the distance between the Earth and the sun.

Catherine Ross, a professor of transportation and growth at Georgia Tech, says Atlanta commutes are so long because as the area grew, there were no natural barriers to limit sprawl.

"We just took advantage of that and decided, 'Well, I'll just go a little further out for a lot more house for a bit cheaper price,' " Ross said, "without really worrying about what it meant in terms of getting to and from your job, moving your children around, visiting your family and friends, making those everyday stops that we all have to make."

Ross said the toll that all of this takes on the environment is not sustainable.

The Carvalhos didn't even look for houses near Emory University. There, a new house like theirs could be triple the price. And, Michelle says, buying a house far from her job didn't seem like a problem.

"I just was doing what my parents did," Carvalhos said, "and it wasn't such an odd idea to have a long commute somewhere."

But scientists say with so many people making the same choices, the planet is paying big costs — like shrinking arctic ice and more intense hurricanes, wildfires and droughts.

During a recent drive home from her job, Carvalhos admitted that she doesn't really like her commute.

"The mornings are fine," she said. "The afternoons are just a little bit more frustrating just because it is much slower, as you can see. We're going 16 miles an hour right now. And I think this is pretty typical for 5:25."

The speed limit on that stretch of road? 65.

Although moving to a suburban subdivision was second nature for Michelle, it has been hard for Galileu, who grew up in a high-rise apartment in Brazil.

The larger house and yard require more maintenance, after all. And he's shocked by the high energy costs. The family's January natural gas bill was almost $300, triple what they paid to heat their last apartment. Their summer electric bills are also three times as high.

But Galileu says he can't figure out how to cut their energy costs, or reduce their driving.

"There's no way that we can use public transportation living in this area," he said. "I mean, I wake up at 4:15 already."

So, while the Carvalhos feel the blows their lifestyle delivers to their budget, they're not as aware of its impact on global climate change.

"I never really thought about it," Galileu said. "Because we get so caught up with day-to-day activities, that we do what we need to do to get through that day."

Still, when Michelle weighs all of her priorities, she's happy with the decision to move to their big, beautiful house.

"While somewhere on my priority list, being environmentally conscious is on there, but it's not going to be as high as what can I afford, what does my family need," Michelle said.

Galileu Carvalho just got a great new job. It pays more. But now, instead of commuting 40 miles a day, he'll be driving 70.