Accessibility links
Atlanta Family Slashes Carbon Footprint Malaika Taylor used to live the typical suburban life — the kind that helps make America the world's top contributor to climate change. But fed up with commuting, Taylor and her daughter moved from the Atlanta suburbs to a green loft in the city.

This is the second in a two-part report. 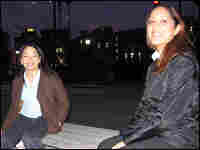 Four years ago, Malaika Taylor and her daughter, Maya, moved from the Atlanta suburbs to Atlantic Station, an environmentally friendly complex in the city. Thanks in part to a shorter commute to work and school, their greenhouse gas footprint shrank. Elizabeth Shogren, NPR hide caption 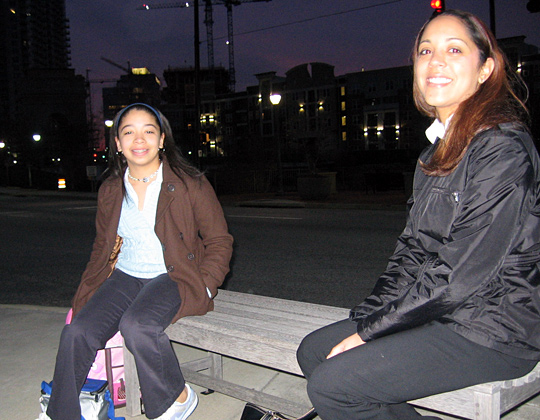 Four years ago, Malaika Taylor and her daughter, Maya, moved from the Atlanta suburbs to Atlantic Station, an environmentally friendly complex in the city. Thanks in part to a shorter commute to work and school, their greenhouse gas footprint shrank.

Atlanta resident Malaika Taylor used to live the typical suburban life — the kind that helps make America the world's top contributor to climate change. But four years ago, fed up with commuting, Taylor and her 11-year old daughter, Maya, moved from the suburbs to the city.

And their "carbon footprint" shrank.

"There are some weekends when I don't even use my car," says Taylor.

The Taylors live in Atlantic Station, a new community in mid-town Atlanta designed to put jobs, homes and shopping all in one place, close to public transportation. Developments like Atlantic Station are springing up around the country, and proponents say they help cut car pollution, including the carbon dioxide that contributes to climate change.

On a typical morning, Taylor walks her daughter to the bus stop and then keeps going 10 minutes to her job as a property manager at an apartment complex.

"I have to admit, if it's raining or really cold, I drive," she says.

Her mile-long commute is unusual in Atlanta, where the federal government estimates the average resident drives 32 miles each day. Early surveys show the people who live and work in Atlantic Station drive about a third that much, according to the Environmental Protection Agency.

"We don't often think of a development as a way to solve environmental problems. But this is really a unique example of kind of growing your way into better environmental quality," says Geoff Anderson, who helped steer the Atlantic Station project through the regulatory process for the EPA. Anderson now heads Smart Growth America, an environmentally friendly development advocate.

At first, the EPA supported Atlantic Station as a way to help Atlanta fight its unhealthy smog problem. Anderson says now the agency sees the community as a model of how America can fight climate change.

"The two biggest things we do from a carbon perspective are, we heat our houses or cool them, or we drive. And when you combine that, that's going to add up to a big chunk of your personal carbon footprint," Anderson says.

Reducing her carbon footprint was not Taylor's intent when she moved. She just wanted her life back.

But living in the city has cut the small family's impact on global warming to about half the national average for a family of two.

When they lived in the suburbs, Taylor filled up her gas tank three or four times every two weeks. Now she fills up once in two weeks.

Her other energy bills shrank, too.

In the winter, her gas bill to heat her suburban house was almost $200. Now she uses electricity to heat and cool their compact, two-bedroom loft. That bill tops out around $80, about 20 percent less than the average bill for an Atlanta household.

Apartments often have lower energy costs because of shared walls and smaller spaces. Americans send more than 1 trillion metric tons of carbon dioxide into the air, or about a fifth of the nation's total emissions. If lots of Americans lived like the Taylors, then the nation's greenhouse-gas pollution could drop by hundreds of millions of tons.

Of course, the move didn't come without tradeoffs.

"I can't afford to buy a house in the city. It took me four garage sales to get rid of enough stuff to fit into my apartment. I thought I purged, and it still wasn't enough, and I had to purge again," says Taylor.

On one recent rainy afternoon, Taylor drives to pick up Maya at the bus stop. It takes them almost no time and hardly any gas or greenhouse gas emissions.

What's more, when it's time to take a trip to the grocery store, it takes only two minutes to get there, and she's is back home within 15 minutes.

It's only 4:20 p.m. Maya has already made a big dent in her homework. And Malaika has a few hours to kill.

"Maybe I'll work out. Maybe we'll play a game. It makes a huge difference just in the quality of our life," Taylor says. "We get to spend a lot more time together. I think she's happier. I'm happier. It makes life a lot better."

An earlier version of this graphic included incorrect data. The graphic has been corrected.