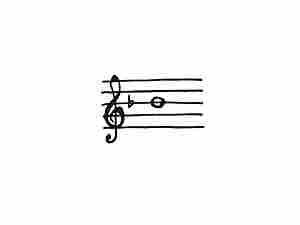 For most of his 30 years, Simon Fluegel has explored the musical movement known as subminimalism. You probably know of him for the two-note cello concerto he wrote as a conservatory student. It was never performed by a full orchestra, but, in transcription, its simplicity made it a natural for toddlers in Suzuki lessons. Now comes Fluegel's most daring subminimalist composition: "B-Flat." The work is the subject of critical acclaim in Europe, as well as a forthcoming Canadian documentary film.

The clarion brass shriek at the outset stakes Fluegel's claim in this, his most ambitious work: not just a new composition, but a daring new aesthetic, subminimalism at its most compact. And yet, at the same time, its most expansive.

In its shrill passion, its martial angularity, its de-textured, monochrome ferocity, the trombone declares: B-Flat. And when it yields to a wooden recorder, we are back on familiar ground with Fluegel: the quiet re-assertion of the pastoral. We are reminded of Fluegel's devotion — in his life, as well as his music — to the organic. And this is Whole Grain B-Flat.

Undeniably evident throughout is the sublime catholicity of Fluegel's taste. There are passages redolent of Brahms, others that call to mind the early Rolling Stones.

A capsule review cannot do justice to the power that these distinct, yet identical tones convey in the title track of Fluegel's new CD: B-Flat and Other Notes, released by Modernitas on this first day of April.

Just as the most subtle, somnolent shifts of Andy Warhol's Sleeper spoke volumes after hours of watching its subject toss and turn, in the self-same way the most minute variations of tone and timbre virtually shout a gamut of emotions at us in Fleugel's "B-Flat." Pain. Sorrow. Triumph. Hunger. Satiety. Flatulence.

And, in a stunning moment of ironic social commentary at the end: the synthesizer, proclaiming technology the survivor of all feeling, all sentiment, all thought.

Is Fluegel's "B-Flat" the last stop for subminimalism? I doubt it. Is it the exemplar to which all further reductions in the genre must be compared? And which, to warrant hearing, they must equal? I think so. And, as Descartes would add, "That's why I am so."