Accessibility links
Superdelegates Primer: What You Need to Know Superdelegates are Democratic party leaders who can vote for a presidential candidate regardless of the popular vote. They are playing a major role in deciding this year's nominee. 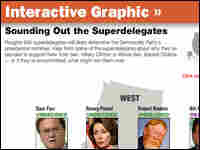 In a new series, "The Backroom Primary," NPR takes an in-depth look at superdelegates and the role they will play (and are playing). The series, which will appear on many NPR programs, will include mini-profiles of superdelegates; conversations with superdelegates who are bucking the will of the people in their districts; and the prospect, first raised by Tennessee Gov. Phil Bredesen, of a "superdelegate primary" in June, after all the other primaries and caucuses have taken place.

With no primaries since early March and none to come before Pennsylvania on April 22, the fight for the Democratic presidential nomination would seem to be in a weird holding pattern. Yet the delegate count continues to change nearly each day. (As of this writing, according to the Associated Press, Illinois Barack Obama has 1,632 delegates, New York Sen. Hillary Clinton, 1,500.)

How, one might ask, could the totals continue to fluctuate if voters are not participating? The answer: superdelegates. Here, a guide to those political creatures and the role they will play in deciding the Democratic nominee for president.

As much of America must know by now, superdelegates are those Democratic Party leaders and elected officials who are automatically delegates to the national convention. In order to win the Democratic presidential nomination, a candidate must win not only the pledged delegates who are apportioned according to the results of the primaries or caucuses, but enough of the superdelegates, who can choose to endorse whichever candidate they wish, regardless of the results of primaries in their state or district.

Who gets to be a superdelegate?

How do superdelegates decide which candidate to support?

Though they aren't bound by the results of primaries or caucuses, superdelegates will often throw their support to whomever they think will make the stronger presidential nominee in the general election. Minnesota Sen. Amy Klobuchar says that's one of the reasons why she decided to endorse Obama on Monday.

Sometimes, pressure back home makes a difference. Georgia Rep. John Lewis, an influential member of Congress, initially endorsed Clinton last year. But his district went overwhelmingly for Obama in the February primary, so Lewis made the unusual decision to switch his support to the Illinois senator.

How many superdelegates are there?

That figure is a moving target. For a long time, the number was listed at 796. But then things began to happen: Eliot Spitzer, the governor of New York, resigned following a sex scandal. That removed one superdelegate (he happened to support Clinton). Puerto Rico Gov. Anibal Acevedo Vila, who is under indictment in a corruption case, is under pressure to resign, too. (He supports Obama).

The Democrats picked up a superdelegate when they won the congressional seat of former Republican House Speaker Dennis Hastert in a special election in Illinois in March. They lost one with the death of Rep. Tom Lantos of California. But they will regain that superdelegate if former state Sen. Jackie Speier, who is heavily favored, wins the special election to fill the remainder of Lantos' term. And so on.

How many are still undecided?

Roughly 250 or so superdelegates have yet to commit to a candidate. (There are 70 or so additional superdelegates who will not be named until the conventions).

The 250 superdelegates are being wooed by Clinton and Obama in a process is mostly hidden from public view, but its importance cannot be overstated. It is mathematically impossible for either Obama or Clinton to win the Democratic nomination outright without these superdelegates.

Where did the concept of superdelegates come from?

Democrats first introduced superdelegates in 1984 as a safety net — they wanted to give the party elders a voice in choosing the nominee. The goal: to prevent the Democrats from repeating what many viewed as a mistake when they nominated Sen. George McGovern of South Dakota in 1972. McGovern went on to lose 49 states that year.

Similarly, former Georgia Gov. Jimmy Carter won the nomination in 1976, against the wishes of many in the party establishment. We should note, however, that their support for former Vice President Walter Mondale, the choice of the Democratic establishment, in 1984 is widely credited with putting him over the top against challenger Gary Hart. Mondale went on to lose 49 states that November.

Why do superdelegates get to play such a big role?

They don't — usually. That's because in the past, the battle for the Democratic nomination had been settled fairly early. Michael Dukakis (in 1988) and Bill Clinton (four years later) established themselves as the clear front-runners fairly early in the process. It was even more one-sided in 2000, when Democrats nominated Al Gore, and in 2004, when John Kerry got the nod. The superdelegates really didn't have much of a role to play. But this time it's different. Neither Obama nor Clinton is running away with the nomination. And that puts the supers in a position they have never been in before.