Accessibility links
The Person I'm Supposed to Be For nearly 20 years, software developer Andy Blowers has battled depression. He now believes depression is encouraging him to shed his weaknesses and become the person he is supposed to be.

Listen
The Person I'm Supposed to Be 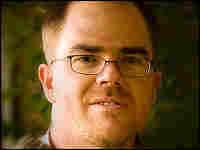 Software developer Andy Blowers is studying for a graduate degree in technical management at George Mason University. He lives with his wife and their young son in Fairfax, Va. Blowers says, "When I look in the mirror, this is the essay looking back." Keith Lanpher hide caption

There's a wretched place depression drags me off to after taking control of my thoughts and feelings. It's the place where the longing for relief mutes every other desire, even the desire to wake up in the morning. There are days when I wonder if I'll lose everything: my job, my relationships, my last stitch of sanity. It feels as though I'm breathing hot black smoke.

Yet I believe the same depressions that pin me to the mat so often also serve a bigger purpose in my life. They don't come empty-handed. I believe the purpose of suffering is to strengthen us and help us understand the suffering of others.

At 16, my first episode hit me hard enough to think I'd literally gone to hell. Now, at 35, when I start dreaming of haunted houses and worrying uncontrollably about the future, I know another episode is looming. I've got a week's notice, maybe two. And then it's as if I'm drifting off to exile inside myself with only a shell remaining.

It used to be that rising from the ash after the depression cleared was like resurrection. The burial over, I'd catch myself laughing or looking forward to the next day. I'd pig out at my favorite deli. But now, when I look closely, I find mental illness leaving other significant gifts in its wake — things I didn't discern when I was younger.

The discovery is like that scene from The Matrix when Neo finally comprehends his identity. Through the whole film, he's been beaten up by evil agents. But the fighting transforms him into a warrior. And at the right time, he understands and uses his power. He's peaceful, even when confronting an enemy. I believe my own years of struggling with depression have left me with similar gifts: inner strength and calm I can rely on, diminished fear and compassion.

I believe the painful nights that close in on all of us in some form are the cocoons from which we might shed our weaknesses. I believe pain tells us something critical about ourselves and life: that developing strength and empathy and bravery is more essential than our personal comfort. And when I think of it like that, I'm more willing to accept suffering on its terms.

That's important, because if my pattern holds consistent, my next episode is due to arrive soon. I live with this reality, but I'm no longer afraid of it. The depression has, in the end, equipped me for its next visit — and that's enough. Of course, I'll take my medicine. I'll talk to my gifted psychiatrist. But when the dark does come, I'll stand up and breathe deeply, knowing I'm becoming the person I'm supposed to be.