Accessibility links
Yale Money Whiz Shares Tips on Growing a Nest Egg Turmoil in the stock market has people on edge, but Yale's investment guru, David Swensen, explains how his allocation strategy and rebalancing technique have earned consistent double-digit returns over the past two decades. 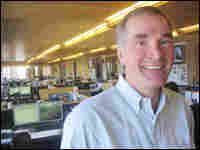 David Swensen stands on the trading floor at his offices at Yale in a file photo. Chris Arnold, NPR hide caption

Where to Invest Wisely

Yale guru David Swensen uses a basic formula for creating an investment portfolio. He also has suggestions about how to keep the balance in a volatile market. Read his tips.

The turmoil in the stock market has a lot of people nervous about their retirement savings. If only they had David Swensen investing their money.

Swensen manages Yale University's endowment. Last year, he made a 28 percent return, adding a whopping $5 billion to Yale's endowment, which is now valued at $22 billion. And that wasn't a fluke: Over the past two decades, under Swensen's watch, Yale's endowment has grown an average of 16.8 percent a year, more than any university, foundation or pension fund.

In scary economic times like this, he cautions that individual investors shouldn't trust their instincts.

"The human tendency in this kind of environment is to do something — to make a change," he says.

Stocks seem risky, especially since they've been falling. Swensen says most people he talks to get nervous and want to sell stocks.

"And that's exactly the wrong reaction," he says. "Buying high and selling low is not a way to make money. It's not hard, right? It's very simple: You want to do the opposite."

To share the wealth with everyone, Swensen wrote a book about retirement investing that details his allocation strategies. He advises having the right long-term mix of stock index funds, bonds and real estate investment trusts (see chart below).

But when stocks tank, that mix gets out of balance: For example, U.S. stocks that once constituted 30 percent of a portfolio may now constitute just 29 percent or 28 percent.

Swensen's ability to buy low and sell high on the market roller coaster has in some instances earned upwards of $1 million in a single day for Yale's endowment — just by rebalancing amidst volatility.

"So you end up at the same place you started, except a million dollars ahead, that's not bad," he says. "But from rebalancing, not speculating — just sticking with your long-term targets."

That's the upside: The stock market can end up flat, but investors still make money because they rebalanced when it was down. Sometimes the market keeps going down. But over time – five, 10 or 20 years — as the market keeps rising, Swensen says, investors can goose out extra returns by rebalancing along the way.

One of the reasons that Swensen can rebalance so frequently is that Yale, like other educational institutions, is tax-exempt. Before attempting to rebalance their portfolios, individual investors need to understand the tax implications of any trades they might make.

Figuring out the right mix of what to own can be tricky. Many people seek out professional advice.

And that's a good idea, says Jim Barnash, the national director of financial planning for Ameriprise Financial. He says in volatile markets like this one, people need quality one-on-one advice to make sure they're properly diversified.

But Ameriprise's advice comes with a price: up to 1.25 percent of the total investment. That means an investor with a half-million dollars invested in a retirement 401K would end up paying about $6,250 a year in fees.

Over 20 years, that person is losing hundreds of thousands of dollars because of fees. Of course, that's better than not investing at all, and a lot of people want an adviser to help them.

But Swensen says most of these investment services provide pretty mediocre advice, and it's just not worth giving them a percentage of your life savings.

Swensen says fees are also the big reason you should buy index funds instead of classic mutual funds. Index funds, which track market segments like the S&P 500, are a lot cheaper.

"When you look at the results on an after-fee, after-tax basis over reasonably long periods of time, there's almost no chance that you end up beating an index fund," he says. The odds, he says, are 100 to 1.

Swensen, who cautions against trying to pick individual stocks, favors nonprofit funds like Vanguard and TIAA-CREF. There too, the lower fees will mean more money in your pocket over time.

The Rebalancing Act: Managing Your Investments

Want More Details? Here are some funds from TIAA-CREF and Vanguard that Swensen recommends.

So you've set up your investment portfolio according to the mix recommended by Yale's David Swensen. Now what? Remember to rebalance.

When is it time to rebalance? Swensen says people should rebalance their retirement accounts at least quarterly — four times a year. He says the technique is a disciplined way to buy low and sell high over time. It also keeps your risk profile where you want it to be.

But investors should always try to avoid transaction fees. Even some nonprofits like TIAA-CREF may charge extra trading fees if an investor rebalances more than a certain number of times a year.

Swensen rebalances Yale's endowment every day. Yale's endowment has in some instances earned upwards of $1 million in a single day — just by rebalancing. Individual investors won't make that much, but it shows the power of rebalancing. Even if the overall stock market doesn't show a gain, you can goose out extra returns this way.

Here's how it works: Let's say an investor has allocated their investments according to Swensen's basic formula (30 percent in U.S. stocks, 30 percent bonds, 20 percent real estate investment trusts, etc.) and the U.S. stock market falls over a couple of months. With U.S. stocks falling, stocks may now make up only 28 percent or 29 percent of the 401K pie chart.

But perhaps bond holdings have risen over the same time period, from the target 30 percent to 31 percent or 32 percent. Then it's time to rebalance by selling some shares in the bond funds and using the proceeds to buy more stock index funds, bringing both categories back into line with long-term allocation targets.

If stocks come roaring back in a month, an investor would own more stocks and make more money on the gains. If stocks jump up to 31 percent or 32 percent in the model portfolio, then an investor would sell stocks high and buy something else — real estate, bonds or whatever has decreased its share of the 401K.

Swensen can rebalance Yale's endowment frequently because Yale is tax-exempt. But if an individual invests savings outside of a 401K or other tax-deferred account, he or she needs to be aware that rebalancing can create tax liabilities. One way to avoid that is to do rebalancing only in the tax-deferred portion of a portfolio. New contributions may also be used as rebalancing tools, so that investors sell fewer existing investments.