Accessibility links
Remembering MLK's Prophetic 'Mountaintop' Speech On April 3, 1968, the Rev. Martin Luther King Jr. delivered his final public speech. Hours before his assassination, he spoke of the injustice felt by the city's striking sanitation workers. But, prophetically, he also touched on death and his own mortality. 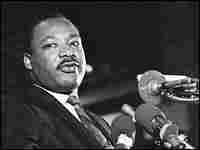 The Rev. Martin Luther King Jr. delivers his last public address, at the Mason Temple, a Pentecostal church in Memphis, Tenn., April 3, 1968, the night before his assassination. Bettmann/Corbis hide caption 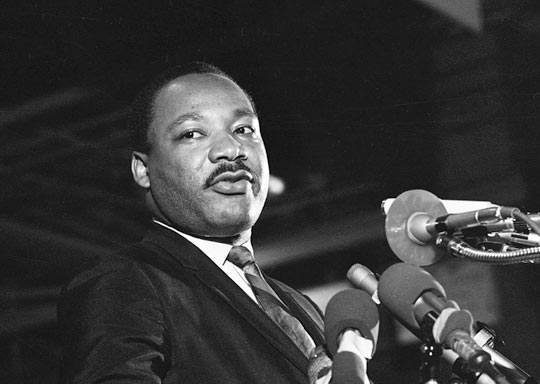 The Rev. Martin Luther King Jr. delivers his last public address, at the Mason Temple, a Pentecostal church in Memphis, Tenn., April 3, 1968, the night before his assassination. 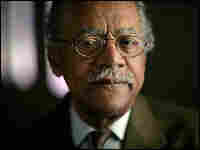 The Rev. Samuel Billy Kyles was in the Memphis church where King delivered his last speech. Brooks Kraft/Corbis hide caption 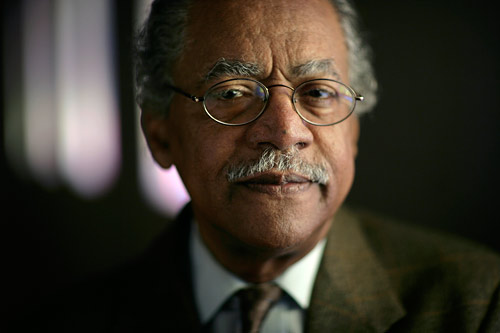 The Rev. Samuel Billy Kyles was in the Memphis church where King delivered his last speech.

The Speeches of Martin Luther King Jr.
Remembering the Civil Rights Era
Brown v. Board of Education (1954)
The March on Washington (1963)

On April 3, 1968, the Rev. Martin Luther King Jr. delivered his final public speech. In a crowded church in Memphis, Tenn., King spoke of the injustice felt by the city's sanitation workers, who were on strike protesting low pay and poor working conditions.

But, speaking hours before his assassination, the civil rights leader went beyond that subject, touching on death and his own mortality.

"There had been so many death threats against his life, especially since he had come out against the war in Vietnam," says the Rev. Samuel Billy Kyles, who was listening to King just a few feet away. "But he talked about death more that night than we'd heard him talk about it in a long while."

In 1958, King was stabbed in the chest with a letter opener by a deranged woman while autographing copies of his first book in a Harlem department store. The tip of the blade came so close to his aorta that his doctor said a sneeze would have killed King. While he was recovering, King received a letter from a teenage girl, who wrote, "I'm so glad you didn't sneeze."

Ten years later, in the speech at the Mason Temple, King took up that theme, saying if he had sneezed, he would not have been around in 1960, when students began sitting-in at lunch counters, or in subsequent years to see the freedom riders, the march in Selma and other key events in the civil rights movement.

The passage brought the crowd to its feet.

'He Took Us to the Mountaintop'

"Many of us, grown men, were crying," Kyles tells Renee Montagne. "We didn't know why we were crying. We had no way of knowing that would be the last speech of his life. And then he took us to the mountaintop ..."

"Well, I don't know what will happen now. We've got some difficult days ahead. But it really doesn't matter with me now, because I've been to the mountaintop. And I don't mind. Like anybody, I would like to live a long life — longevity has its place. But I'm not concerned about that now. I just want to do God's will. And He's allowed me to go up to the mountain. And I've looked over, and I've seen the Promised Land. I may not get there with you. But I want you to know tonight, that we, as a people, will get to the promised land. So I'm happy, tonight. I'm not worried about anything, I'm not fearing any man. Mine eyes have seen the glory of the coming of the Lord." — the Rev. Martin Luther King Jr.

Kyles says he's "so certain" that King "knew he wouldn't get there, but he wouldn't tell us that. That would have been too heavy for us, so he softened it."

Afterward, "we had to help him to his seat behind that powerful, prophetic speech," Kyles says.

"He preached himself through the fear of death," Kyles says. "He just got it out of him. He just ... dealt with it. And we were just standing there. It was like, what did he know that we didn't know?"

Kyles, who still preaches in Memphis, says that while much of King's dream has been realized, there's much more to do.

When he speaks to people who were not alive or too young to remember King, Kyle says he tells them, "we're not going to get to the place where we can say, 'Dr. King's dream has been realized. Now we can go to the beach.' That's not going to happen. Much of it has been realized, but there is so much to do. But each generation will have its portion, and that helps to keep the dream alive."