Accessibility links
'Round the Clock: Obama, Clinton Wiki-Warfare Attempting to police Wikipedia pages for Sens. Hillary Clinton and Barack Obama is a 24-hour job for Jonathan Schilling, who's been working on Clinton's for three years, and Tina Vozick, who's been on Obama's for two. 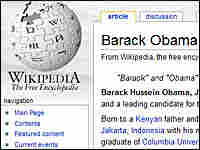 Sen. Barack Obama's Wikipedia page, like the one dedicated to Sen. Hillary Clinton, is under constant assault. Wikipedia hide caption

Wikipedia describes itself as the free encyclopedia anyone can edit — and by anyone, they mean anyone — which is a problem for Sens. Barack Obama (D-IL) and Hillary Clinton (D-NY). After all, a Web search for either candidate will return his or her Wikipedia page, often as the second result. With so many eyes viewing those pages every day, the stakes are high — and for two unofficial minders, attempting to police those pages has become a 24-hour job.

Jonathan Schilling and Tina Vozick don't have administrative rights to shut down the pages — but they are surfing them constantly. "My family thinks I'm crazy for doing it," Schilling says. "During this heated political campaign, especially this year, it's been pretty intense at times."

With this much openness, they say the pages are not just a battleground for people who want to get their voices heard but are also easy places for pranks and sabotage. Some of the uglier comments, Schilling and Vozick both say, are caught immediately by Wikipedia "robots." Schilling says that if someone posts "Hillary Clinton is a communist and will ruin America," then the robots are tipped off. "But if there are less obvious transgressions ... that's where editors like me ... come in."

And to know what's slant and what's untrue, Schilling says he's done a tremendous amount of preparation. "I've read any number of books about her," he says. "I've gone to libraries many times to research it, I've gone to university libraries to find political science papers about some aspects of her public reaction. ... I'm pretty familiar with her whole biography."

No matter the research, not every fix is clear, Schilling says. One good example is the matter of Clinton's contention she saw sniper fire during a 1996 stop in Bosnia. "At first it looked like it might just be a one- or two-day story that you get all the time during these campaigns," he says. "Lately it seems like it's seeped into the public consciousness ... undermining her credibility, her foreign policy expertise. ... You can make a decision, this probably needs to go in."

Clinton's Iraq vote, Schilling says, is another flash-point. "That's an important vote she cast as a senator. That's pretty much a no-brainer. ... It needs to be there."

Obama's page has for years been under siege from what Vozick calls racist comments and the work of vicious critics. "It's been more personal than political," she says. "In the last few months, I would say that the attacks have become political and subtler." Right now, she says, the page is locked down, mostly due to heated comments about the Rev. Jeremiah Wright, Obama's longtime friend and former pastor.

Vozick also says that the discussion page associated with Obama is plagued by people asking why his profile doesn't include his Muslim faith. "The Muslim faith ... the discredited madrassa story: That goes in there all the time, I would say at least once a week ... 'Why doesn't it say that Barack Obama was a Muslim, is a Muslim, is going to be a Muslim, has Muslim family?'"

As far as the most offensive thing she's seen in two years of monitoring Obama's page, Vozick recalls a summer evening, late at night, when she visited the page. "There was a picture there of naked men, black men in a sauna. ... It wasn't there very long, but it was put back a couple of times."

Schilling says that for now, it's a different situation for Sen. John McCain (R-AZ), the presumptive Republican presidential nominee. "McCain doesn't attract as visceral a reaction," he says. "Hillary — even long before she ran for president — she's always been an incendiary figure. ... As the election goes on, [McCain's page] will get more and more active, because of reasons of pure partisanship."

Is it worth it? "I've always been a news junkie," Vozick says. "It's not really partisan for me. ... I edit Clinton almost as much as I edit Obama. I edit Nancy Reagan sometimes."

"The motivation is really different," Schilling says. "You get this huge readership. ... How else are you going to get this opportunity to do research you're interested in?"

"You're never sure if people believe what's in these articles," he says. "There's a big trade-off here. And, of course, we don't get any credit usually for this. We put in a lot of hours and the pay is absolute zero."