Accessibility links
Nick Lowe: Power-Pop's Misanthrope Nick Lowe's "Born a Woman" provides a template for the philosophy and worldview that would drive him throughout his career. Backed by the sprung, melodic energy of power-pop in full flower, it's not entirely clear whether Lowe is decrying the song's misanthropy or reveling in it. 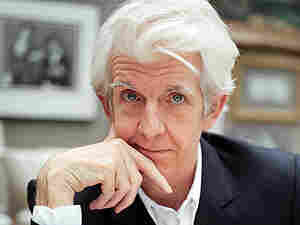 "Born a Woman" is one of the cheekiest moments in Nick Lowe's already-cheeky career. Dan Burn-Forti hide caption

One of the fascinating things about the song "Girls Just Want to Have Fun" is the way the song, which might well be a feminist call to arms in the hands of Cyndi Lauper, would sound viciously misogynist if the exact same words were sung by a man. Considering that a man actually wrote it, it's essentially a lyrical landmine in the battlefield of the sexes, not to mention an object lesson in how much the apparent meaning of a song depends on who sings it.

Nick Lowe inverts the formula on "Born a Woman," which kicked off his Bowi EP — the cheekiest moment in a very cheeky career. (Lowe was returning what he assumed was the compliment paid to him by David Bowie's Low.) Included on the new reissue of his solo debut Jesus of Cool, the song was written by Martha Sharp and originally performed with a countryish resignation by Sandy Posey. Coming from two women, the lyrics were delivered as a lament about the world's cruelty and inequality.

Lowe, on the other hand, is perverse enough to sing "Born a Woman" with apparent glee, providing in many respects the template for the philosophy and worldview that would drive him throughout his career. (It turned out that he wasn't a misogynist; just a misanthrope.) Backed by the sprung, melodic energy of power-pop in full flower, it's not entirely clear whether Lowe is decrying the information he's sharing or reveling in it. It could be both. In the end, it doesn't matter, because the damage is already done.