Accessibility links
Django Reinhardt Festival: Hot Club Music Exhilarated and a little homesick at the end of a three-week U.S. tour, Dorado Schmitt and his band swing hard and play loose. The air dances at this Django Reinhardt Festival at the Kennedy Center Jazz Club, featuring two French guitarists, a violinist, a squeeze-box man and a bassist.

Take Five: Get To Know Jazz 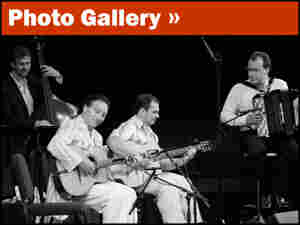 Django Reinhardt was born in 1910 to a family of French Gypsies. He taught himself guitar before he could read or write, but then he nearly lost his life (and badly hurt his hand) as a young man by accidentally lighting a fire with a candle. Reinhardt tirelessly rehabilitated his injured hand and taught himself to fret the guitar with two fingers. His clear, emphatic guitar — inspired in part by Armstrong and Ellington — swept the continent in the 1930s.

Reinhardt and violinist Stephane Grappelli had to disband their Quintet of the Hot Club of France during WWII. Reinhardt miraculously escaped extermination, the fate of many European Gypsies, but he died in 1953 near Fontainebleu. Django festivals live on in Europe today, and here in the U.S., the team of Ettore Stratta and Pat Phillips has been importing this popular Django Festival every season.

Accordionist Ludavic Beier lives in Vincent van Gogh's town, Auvers sur oise, where he works in a modern jazz band, but he loves the Hot Club style. Beier says that American bands of the 1930s put the swing in the drums and the brass.

Emcee Brian Torff is the Connecticut bassist who toured with Grappelli in the 1970s. While many Django Reinhardt bands operate in America, Torff explains that these French musicians perform at a higher level: "It's their culture, their heritage, their artistry."