Accessibility links
Bette Davis: In Those Eyes, Always a Glint of Fire She was the Hollywood star for two decades, then a washout, then an Oscar nominee again — twice. On the centenary of her birth, NPR's Bob Mondello looks back at a star you think you know.

Listen
Bette Davis: In Those Eyes, Always a Glint of Fire 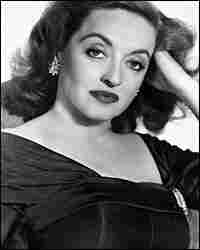 A Lady, A Vamp: Bette Davis (photographed in 1950 as Margo Channing) ruled Hollywood from the 1930s to the late '40s — then found herself being called a has-been. That was two Oscar nominations too early. Twentieth Century Fox/Bettman/Corbis hide caption 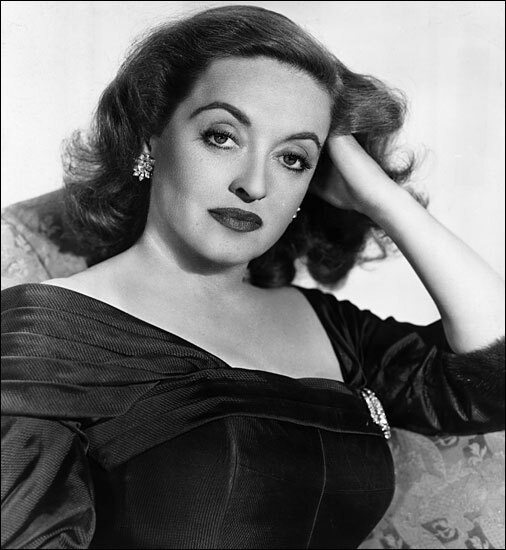 A Lady, A Vamp: Bette Davis (photographed in 1950 as Margo Channing) ruled Hollywood from the 1930s to the late '40s — then found herself being called a has-been. That was two Oscar nominations too early.

Davis in 1936, the year of her first Oscar win. Another was just around the corner. Bettman/Corbis hide caption 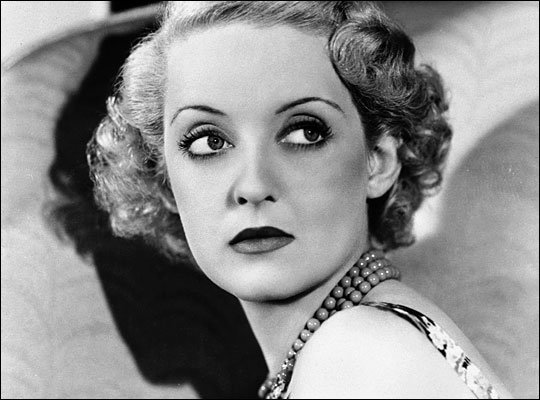 Davis in 1936, the year of her first Oscar win. Another was just around the corner.

At the Peak of Her Powers

Purists, like Margo Channing, brook no nonsense: Bette Davis was at her fearsome best as the threatened diva at the center of All About Eve. Here, two choice moments:

'A Young Lady of Qualities' 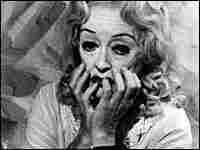 The horror, the horror: Davis as a demented former child star in the 1962 camp classic What Ever Happened to Baby Jane? She starred with — and sparred with — her Hollywood nemesis Joan Crawford. Keystone/Hulton Archive/Getty Images hide caption 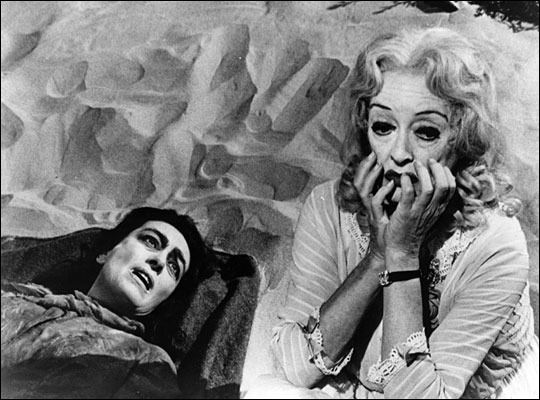 The horror, the horror: Bette Davis (right) as a demented former child star in the 1962 camp classic What Ever Happened to Baby Jane? She starred with — and sparred with — her Hollywood nemesis Joan Crawford (left).

Three full-length tracks from the notorious Broadway revue Two's Company, featuring Bette Davis at her bravest, if not at her best:

'Turn Me Loose On Broadway'

Two's Company might not have been a smash, but you can't say the producers didn't recruit some talent in the attempt to make it work. The playbill credits included choreographer Jerome Robbins, poet Ogden Nash and songwriter Sheldon Harnick. A pre-Gilligan Tina Louise was in the ensemble. And the director? No less an auteur than Jules Dassin.

She was unfaithful and a shrew in Of Human Bondage, spoiled and headstrong in Jezebel, devious and dangerous in The Little Foxes — and only a fool would tangle with her Margo Channing, who famously warned moviegoers to fasten their seatbelts for the bumpy night that was All About Eve.

Bette Davis — by many measures the great movie star of Hollywood's studio system, was born 100 years ago this week. Her movies play constantly on television, and her mannerisms are so familiar they've become the shorthand stock-in-trade of countless female impersonators.

But for her centenary, it's worth considering — and listening to — a Bette Davis who might just be a little less familiar.

Davis' artistic dossier is undeniably impressive; she was a cinematic force of nature in the 1930s, '40s and '50s. No one smoked a cigarette or strode into view or delivered a barbed line with more force than she did.

Her personal dossier, on the other hand — well, she played difficult women, and she had a reputation for being difficult herself.

When the Brothers Warner cast her in mediocre movies, she made them sue her before she'd star in them. She fought with director William Wyler, with whom she was madly in love — and with her brother-in-law, a recovering alcoholic to whom she sent two cases of liquor as a wedding present. She feuded with Joan Crawford, the archrival she once accused of having "slept with every male star at MGM except Lassie."

And at the peak of her fame for doing those things, she played a character who did that same kind of thing and had the nerve to try to justify her behavior:

Infants behave the way I do, you know. They carry on and misbehave — they'd get drunk if they knew how. When they can't have what they want; when they feel unwanted, or insecure, or unloved.

That was All About Eve's Margo Channing, of course, not the actress who played her, and Davis herself was never that kind of "insecure." She knew she was good. And as she took home Oscar nomination after Oscar nomination — eight of them in 10 years, all for Best Actress — the industry kept reminding her just how good.

And then it discarded her — calling her difficult, and washed up, and over the hill at 40. Which is when she made All About Eve, and even though it won her another Best Actress nomination, it didn't restart her career.

In fact, the film did her so little good that a year later she did something that I'd say proved that Bette Davis wasn't difficult at all. Turns out she'd do absolutely anything she was asked to do — including Two's Company, a Broadway musical revue.

A Trouper, Even in Extremis

Bette Davis sings? Even given "four boys to dance with — hoofers who twist and twirl," as one unfortunate lyric put it, she wasn't much of "a musical comedy girl."

Now, the thing about live theater is that you don't get to do it once and then you're finished; you have to do it every night. And the minute the producers announced that Bette Davis was doing a musical revue, it started selling out, so she was going to have to do a lot of nights.

Standing-room-only tryouts in Detroit, Philadelphia and Boston, an enormous advance on Broadway: It didn't really matter that the show was terrible or that Davis couldn't sing — except to her of course.

Rumors had been circulating during rehearsals that she was sick, she was dropping out, she was being replaced by Martha Raye. All false, as it happened.

Though she was tired: At the show's first performance in front of an audience, she finished the opening number and almost immediately collapsed. When she revived, she blew the crowd a kiss and said, "Well, you can't say I didn't fall for you."

This is a woman who's difficult? The lady was a lamb — which didn't keep the producers from leading her to slaughter. They called in show doctors who didn't do much except encourage their star to do a lot of un-starlike things. She even sang a song as a gap-toothed, pipe-smoking hillbilly. Critic Walter Kerr wrote at the Broadway opening, "Miss Davis unbends so much there's some doubt whether she'll ever be able to straighten up again."

Davis ended up giving more than 150 performances in Two's Company before returning to Hollywood, where once again, no one paid much attention to her — until she earned a 10th Oscar nomination as a horror-film gargoyle in What Ever Happened to Baby Jane?

A Star on Her Own Terms, if Not Always Hollywood's

At which point, at 54, she was again written off as over-the-hill — finished. Imagine that happening to Meryl Streep or to Helen Mirren, both of whom are older, and neither of whom is remotely as big in Hollywood as Davis was at her peak.

Unthinkable, right? But that was then, so Davis did what a woman of a certain age had to do — she compromised. Not her standards, but her fees. She went on television and did more theater, including another stab at a musical, believe it or not. Even after a stroke and recurring bouts of cancer, she continued working, right up until the year she died.

So excuse me: a temper tantrum or two, a bitchy remark (or six)? Entirely understandable. Bette Davis may have raised her voice on occasion, but difficult? What she was up against was difficult.