Accessibility links
Neighbors Feel China's Expanding Power China's power is growing in its own backyard of Southeast Asia, even in countries that were once firmly anti-communist. Through transportation projects, cheap goods and cultural centers, China is using its influence to try to make friends throughout the region.

The fourth of a seven-part series. 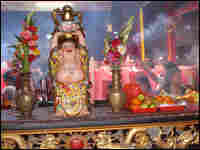 At Jakarta's Vihara Dharma Bhakti temple, it's much easier to worship now than it was during the 30-year rule of Suharto, when China — and most things Chinese, including Indonesia's ethnic Chinese minority — was viewed with suspicion. Michael Sullivan, NPR hide caption 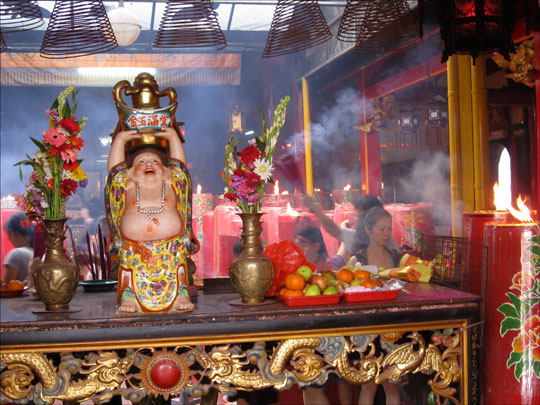 At Jakarta's Vihara Dharma Bhakti temple, it's much easier to worship now than it was during the 30-year rule of Suharto, when China — and most things Chinese, including Indonesia's ethnic Chinese minority — was viewed with suspicion. 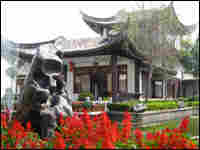 The Sirindhorn Chinese Language and Culture Center at Mae Fah Luang University in northern Thailand, where several graceful pagoda-like buildings sit around a pond on the campus, was built and paid for by the Chinese government. Michael Sullivan, NPR hide caption 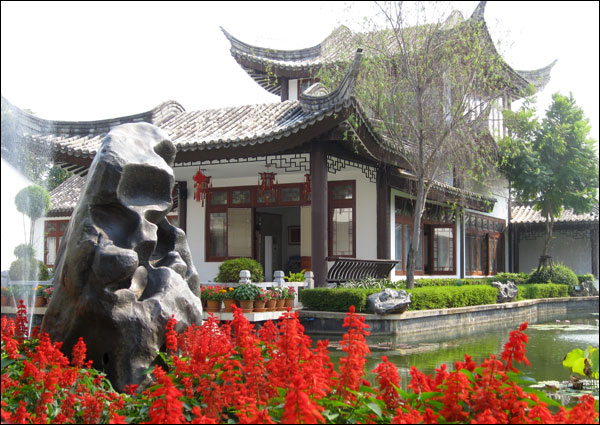 The Sirindhorn Chinese Language and Culture Center at Mae Fah Luang University in northern Thailand, where several graceful pagoda-like buildings sit around a pond on the campus, was built and paid for by the Chinese government.

Every day seems to bring a new statistic about China: It has become the world's third-largest trading nation, it has the most cell phone subscribers in the world and it emits the most carbon gases.

Some media refer to this growing influence as the rise of China. Chinese people see this as their country's rightful return to the dominant position it occupied in Asia for much of the past 2,000 years. Read more about NPR's seven-part series exploring China's role in the world. 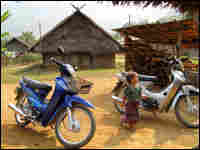 Motorcycles from China — which cost less than half what Thai motorcycles cost — are easing travel for villagers in rural Laos. Michael Sullivan, NPR hide caption 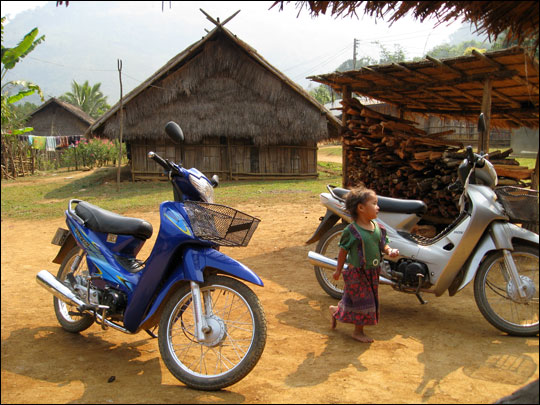 Motorcycles from China — which cost less than half what Thai motorcycles cost — are easing travel for villagers in rural Laos.

As China expands its reach around the world, its power also is growing in its own backyard. The United States exerts considerably less influence than it used to in Southeast Asia, and China is increasingly filling that role, even in countries that were once firmly anti-communist.

For example, it wasn't that long ago that Indonesia and China were mortal enemies.

"The military still believed until yesterday, actually, that the 'yellow fever' is coming down," Harry Tjan Silalahi of Jakarta's Center for Strategic and International Studies says with a laugh. "This threat of the north."

He says a 1965 coup attempt by Indonesia's Communist Party helped convince the Indonesian military of China's expansionist impulses. The coup was brutally suppressed by Indonesia's U.S.-backed military, and more than half a million people — many of them Communists — were killed in the purge that followed.

Indonesia's military leader at the time, Suharto, saw the country's ethnic Chinese minority as a potential fifth column. As a result, public displays of Chinese culture and heritage were banned.

"There were no dragon dances or public celebrations," says Suherman, a caretaker at Jakarta's Vihara Dharma Bhakti temple. "If we wanted to observe the Chinese New Year, we had to do it quietly at home. Even the Chinese characters you see on the walls here were banned during that time because Suharto believed they might contain a hidden political message."

But 10 years after the fall of Suharto, dragon dances are no longer forbidden and the Chinese New Year is an official holiday. Indonesia's ethnic Chinese have their own newspaper, and Chinese firms compete with U.S. and European companies for Indonesia's vast reserves of oil, minerals and gas.

"China is also less aggressive," Harry Silalahi says. "The presence is more non-colonialistic, to put it that way. They come here as scholars, as artists and diplomats."

'Friendship as a Spearhead'

China is using the "soft power" of culture and ideas to make friends all over the region. One example is a Chinese language and cultural center at Mae Fah Luang University in northern Thailand. Several graceful, pagoda-like buildings set around a pond form a center that was built and paid for by the Chinese government.

"Very clever. They are very clever," says Vanchai Sirichana, the university's president. "They understand the way of life here and they understand the people, so the way they do is softer than what Americans did, using friendship as a spearhead to do the business. ... And it's working. In terms of Thai students, you know that five to 10 years ago, most of them [wanted] to go to study in the States. And now, the idea has changed ... to China."

Cheap goods are another example of China's soft power, and they are making life better for some of the region's rural poor.

In Long Lao Mai, a small village in neighboring Laos, villagers eke out a living farming. Headman Saidoa Wu says the arrival of Chinese goods in the markets a few years back was a good thing.

Before, he says, the markets only had goods from Thailand and they were too expensive. Now the villagers can buy secondhand clothes, blankets and kitchenware from China, which are far cheaper — and almost as good, he says.

The biggest change for them is the Chinese motorcycles that can be purchased for $500 — less than half the price of one from Thailand.

"Before, when people were sick, we had to carry them out or wait for the bus, which comes just once a day," he says. "Now, if someone is hurt or sick, we can take them straight to the hospital in Luang Prabang."

Soft power of a different sort can be seen in the Philippines, where a new rail line will link metro Manila to central Luzon — a $500 million project funded by a low-interest loan from the People's Republic of China, one of the newest and biggest donors to the region.

"They obviously have been one of the fastest-growing economies in the world. They've had a very successful development experience, and so they have a lot to offer in terms of both knowledge as well as financing," says Larry Greenwood, vice president of the Asian Development Bank in Manila. "Certainly our experience with China has been very positive in the sense that they are very good at helping design and execute projects which have had very good impacts and outcomes in terms of development effectiveness."

Many of the projects funded by China come with few strings attached for the governments involved.

"China brings to the table a different kind of package," says Thitinan Pongsudhirak, director of the Institute of Security and International Studies at Bangkok's Chulalongkorn University. "They don't have conditions attached to foreign aid. The U.S., the Europeans, they're bent on the promotion of liberal democracies; they have principles about human rights and democratic rule and so on. China does not have the same benchmarks. China understands very well that it wants to build relationships with these countries in Southeast Asia."

Aileen Baviera, dean of the Asian Center at the University of the Philippines, says that while the United States can be a distant ally with other priorities, China is right next door and is going to stay.

China has "learned how to speak the language of the region, of Southeast Asian diplomacy — multilateralism, you know, confidence-building — much more than the United States has," she says.

But not everyone is as sanguine about China's influence or its intentions. Demonstrators in Vietnam's capital, Hanoi, have protested what they see as Chinese aggression in the Spratly Islands, an oil-rich area in the South China Sea claimed by both countries.

Such displays are rare in communist Vietnam but were tolerated by the government, in part because they tap into a deep well of nationalism with roots in Vietnam's long and often bitter experience with its neighbor to the north. More than a thousand years of occupation and conflict have left many Vietnamese deeply suspicious of China, now Vietnam's second-largest trading partner.

Vu Thi Thu Trang, 23, says she worries China is using its economic power to nibble away at Vietnam's territorial and cultural integrity.

"I don't trust them at all. China is already the new colonial power in the region. If our government doesn't do something soon, we'll lose our sovereignty and our independence," she says. "If things continue like this, Vietnam culture will be gone. It will simply disappear."

Vietnam's government has a more pragmatic view of its powerful neighbor, whose appetite for raw materials has helped fuel Vietnam's booming economy. That economic integration and interdependence is another example of how China's soft power is transforming the region.