Accessibility links
Fossilized Feces Tell Tale of Earliest Americans Archaeologists are abuzz over human excrement found in an Oregon cave that dates back to a time before the earliest known Americans. The fossilized feces are 14,000 years old and lend support to the theory that people first came to the Americas by a Bering Sea land bridge. 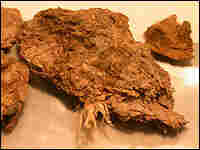 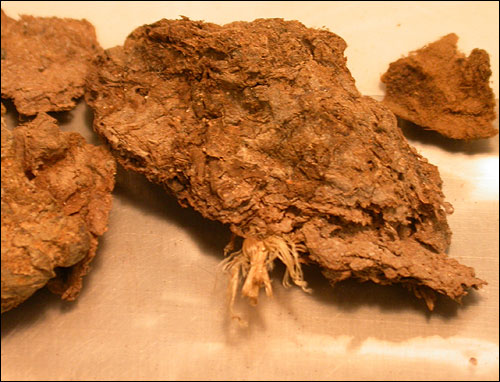 The fossilized human feces found in Oregon's Paisley Caves have been radiocarbon dated to 12,300 B.C.

Archaeologists are abuzz over the discovery of several 14,000-year-old pieces of fossilized human excrement found in Oregon.

These coprolites, as they're called by experts, are remarkable for several reasons. For one thing, they're older than most artifacts left by the earliest Americans. For another, they contain DNA, which gives scientists a rare opportunity to learn about the first people to arrive in North America.

Archaeologists knew about Oregon's Paisley Caves back in the late 1930s. These shallow caves were carved into a hillside by a prehistoric lake. Inside, they found animal bones, stone tools and other signs that humans camped or lived there. But in 2002, a team dug deeper and found what you might call pay dirt, says archeologist Dennis Jenkins.

"At the bottom of cave No. 5, we recovered horse and camel bones and a coprolite which produced human DNA," Jenkins says. He and colleagues at the University of Oregon eventually found hundreds of coprolites. Six contained human DNA. What amazed Jenkins was how old they were: 14,300 years.

That radiocarbon date is important because no one has been able to agree on when people came to the Americas. The earliest clear evidence is about 13,000 years ago, but it's mostly stone tools and butchered animal bones. These were left by the Clovis people, traditionally thought of as the first Americans.

But nobody had human remains that old, not even bones or teeth. So fossil feces — especially with DNA — is a watershed discovery, says Jenkins.

"We finally have human remains or cells," he says, "basically molecular evidence for human beings before the Clovis time, and they're basically the individual's signature that they left."

And they left it at least 1,000 years before the Clovis people.

And the DNA tells more.

"Our results show that the oldest evidence we have to date of human presence in North America is definitely of Native American origin," says Eske Willerslev, the University of Copenhagen scientist who extracted the DNA.

The coprolite DNA shows certain genetic patterns — called haplogroups by geneticists — common to present-day Native Americans. These patterns are also found among certain people in eastern Asia. That adds weight to the hypothesis that people first came here across the Bering Sea on a land bridge connecting the two continents.

Jenkins says scientists are still teasing out more information from the fossil feces; not surprisingly, for example, what early American cuisine was like.

"They certainly ate sage grouse and smaller animals," he says. "I think we recovered some chipmunk bones from one of the coprolites."

Jenkins says there are residues in the coprolites from types of plants that still can be found near the caves.

"What we have," he says, "are visitors coming for a short stay, doing some hunting and collecting. They would have been looking out over a grassy plain, probably with a pretty rich environment, probably a few trees here and there, junipers, some pine trees possibly, but mostly an open shrub and grassland."

There are some puzzles raised by the mix of coprolites in the cave bottom, however. Thomas Dillehay is an archeologist at Vanderbilt University. He says some of the coprolites "did not have human DNA, and some of them had canine, perhaps fox, DNA. So those admixtures are somewhat problematic and those problems need to be resolved in the future."

So there's a chance that the coprolites were left by canines, or contaminated by them.

But Jenkins notes that some of the coprolites contain human hair and human proteins, in addition to human DNA. He suggests that if they were left by dogs, then they were dogs that were eating humans, which doesn't change the conclusion that people lived — and died --there 14,300 years ago.

With hundreds more coprolites to examine, genetics expert Eske Willerslev says there's lots they can still find out from the DNA.

The research on the Paisley Caves coprolites appears in this week's issue of the journal Science.