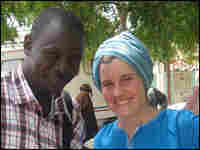 Vive le Senegal! Le quatre avril is Senegalese Independence Day. Last year at this time, I made good on a longtime dream and spent three months in the West African country I first learned about in French literature class.

French is the administrative language of Senegal, but Wolof is the predominant language for most people in Keur Momar Sarr, the small town where I volunteered with a small environmental organization. I arrived in Senegal with a very basic Wolof vocabulary: waaw (yes); dedet, (no); Nga def? (How are you?) But, in everyday conversation, it was hard to recognize even those basic phrases.

Which brings me to the Best Song in the World Today.

You probably haven't heard of Coumba Gawlo Seck, but she's as popular in Senegal as her compatriot Youssou N'Dour is on the world music scene. Gawlo Seck is at the top of the charts and she's pictured on billboards outside the capital city of Dakar.

I was pleased — and surprised — to understand the biggest word on the billboard advertising her new album, Dieureudieuf. It means "thank you."

I heard the title song everywhere — on the dusty main street of Keur Momar Sarr, in rusted out shared taxis and in the homes of my new friends who served me atayaa, the sweetened bitter tea, served in miniature glasses.

Eventually, the song grew on me. I understood more and more of the lyrics — an extended shout out to her fans, who she lists by name.

The first name on the list, Aida, is my Senegalese name, given to me by a woman who worked in a community garden on the outskirts of Keur Momar Sarr.

The other names in the song remind me of people I met in Senegal. Awa, the girl who had the highest grade point average in the local middle school; Alassane, who was opening up a café in the nearby town of Louga; Aliou, who played this song over and over for me, until I could dance to it. Sort of.

My neighbors twelve-year old Daba and seven-year-old N'deye Couna, who taught me to do laundry in a blue bucket and hang it on the line with plastic clothespins; my colleague Daouda, who insisted I should find a Senegalese husband; El Hadj, who pointed out the difference between the Wolof phrases name nale (I miss you) and nope nala (I love you); Fama, who taught me to make the traditional fish-and-rice dish of thieboudienne; François, who took me shopping for fabric and invited me to his aunt's house for lunch.

This winter, I missed my Senegalese friends and couldn't get that Coumba Gawlo song out of my head, so I went to Fulton Street, a West African strip of Bedford-Stuyvesant, Brooklyn, in search of the Dieureudieuf CD.

I used my rudimentary Wolof with the guy behind the counter — Nga def? (How are you?) Naka lige be? (How's work?) I thanked him for the CD. He responded with, nyokobok, the Wolof version of "you're welcome," which means, literally, "we share."

In honor of Senegalese Independence Day, I'm sharing the Best Song in the World Today with you, Coumba Gawlo Seck's "Dieureudieuf"