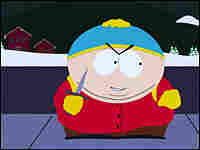 Iconoclast? Insufferable? Sound off on the 'In Character' Blog.

Unforgettable moments from the regrettable career of Eric Cartman. 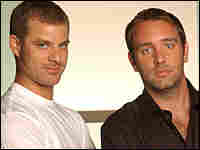 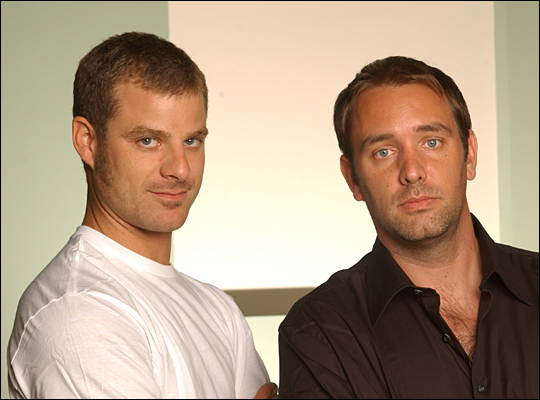 Troubled kids: The scandal of South Park's debut landed creators Matt Stone (left) and Trey Parker on the cover of Newsweek. They've been upping the ante since.

It worked so well with Cookie Monster that we thought we'd try it again with Cartman: NPR's Julie Rovner sprang the potty-mouthed fourth-grader from detention long enough to answer an adaptation of the Proust Questionnaire.

Eric Cartman is by far the most famous of the four foul-mouthed grade-schoolers who inhabit the cardboard-cutout town of South Park on Comedy Central. In fact, he ranked No. 10 on a TV Guide list of the Top 50 cartoon characters of all time.

As South Park's major villain, it's Cartman who often provokes the action. It's Cartman who steals the speedboat that breaks the dam that floods a nearby town, causing misplaced hysteria about global warming in the episode "Two Days Before the Day After Tomorrow."

And it's Cartman, in the episode "Something You Can Do with Your Finger," who insists that he and his friends try to get rich by forming the boy-band Fingerbang.

But if some things never change — Cartman's capacity for appalling behavior, for instance — others do. These days, Cartman and his South Park companions Stan, Kyle and Kenny are drawn on computer, not cut out of construction paper. That enables their creators, Trey Parker and Matt Stone, to better take advantage of breaking news events they can satirize.

For example, a recent episode otherwise devoted to a pre-teen drug craze included a not-so-veiled nod to the downfall of New York Democratic Gov. Eliot Spitzer. Earlier episodes did South Park-style send-ups of Hurricane Katrina, the Terri Schiavo controversy, and even the Sept. 11 attacks, all within days — and in some cases hours — of their occurrence.

So how did Cartman become the star? Parker, who voices Cartman and writes nearly every episode of the show, says at first the four boys didn't have particularly distinct personalities. Parker and Stone based Stan and Kyle on themselves and their families, and set the show in the Denver suburbs, where they grew up. But Parker says Cartman was quick to break out of the pack.

"I'd say within the first season, we kind of realized Cartman's like a little Archie Bunker," Parker said in an interview at South Park Studios in Los Angeles. "And we were big fans of All in the Family, and we were going back and seeing some of those reruns, and we kind of realized what we had there.

"And especially because he was 8 years old, he was kind of free to say whatever he wanted. He could dress up like Hitler, and he could do this because he's 8. And he doesn't really know what he's doing; he doesn't care. He's just a product of his environment."

That environment being the only child of a single mother, living in a small town eating junk food and watching a lot of television. The apparently amoral Cartman is always cooking up get-rich quick schemes or finding ways to get himself and his friends in trouble.

In the current season's debut episode, Cartman gets HIV from a botched blood transfusion, then purposely gives it to Kyle — whom he then urges to stay optimistic.

Kyle responds by punching him in the mouth.

But giving his best friend HIV isn't even close to the worst thing Cartman has done on the show. Parker says that probably goes back to an episode from 2001, when Cartman actually ground up a rival's recently deceased parents and served them to him in a bowl of chili.

Parker said there was some serious debate in the South Park writers' room about whether that was going a step too far, even for Cartman.

"We had that idea and we thought it was really funny, but then we were like, 'Well, we're setting a new bar now.'"

And it was a big thing. Parker said he and the writers all agreed that they couldn't actually let Cartman murder anyone.

"But you could obviously see how if they were going be dead, he could feed them [to an enemy]," Parker said. "So we debated it for a long time, and then we did it."

There was, to put it mildly, a reaction.

"There were some people who were big Cartman fans who said, 'He wouldn't do that; that's crossing the line,'" Parker recalls. But at the same time, "there were other people going, 'That's awesome.' Because no other show would have done that."

An Original, But Cut from Familiar Cloth

Johnson-Woods teaches media and communications at the University of Queensland in Australia, and she wrote the 2007 book Blame Canada: 'South Park' and Contemporary Culture.

She says the scatological humor and biting satire of South Park have a rich history dating back not just through the early days of television, but to authors such as Jonathan Swift and Rabelais, as well as to medieval carnivals and even earlier.

"I'm sure that one of the first things that a caveman drew on the wall was a person with a big penis," Johnson-Woods says.

Even in the TV universe, Cartman is heir to a rich tradition.

"He's not the first overweight, problematic, money-chasing bigoted male to be on television — not even the first cartoon one," Johnson-Woods says. She sees Cartman as a hybrid of Archie Bunker, Jackie Gleason of The Honeymooners and the animated Fred Flintstone.

All About Cartman's Mother

In recent years, Parker says, he and Stone have probed a little deeper into what — or who — has made Cartman what he is. And they've decided it's his mother.

"We always had this thing where Cartman's mother was so sweet — she was always so sweet to him and giving him whatever he wanted," Parker says. "And I don't know if it's worse in L.A. than most places in the country — I hope so — but [we've met] so many parents who were just so desperately trying to be friends to their kids. And it was the thing we really picked up on. And it was just like, 'These [people] are making these really evil kids."

All of which led him to pen an episode in which Cartman's mother brings in Cesar Millan, also known as The Dog Whisperer, to try to bring her son to heel.

The real-life Millan trains owners to be dominant pack leaders to their dogs. And he tried to help Mrs. Cartman become the pack leader for Eric.

"And there was just the hint of, he might come around; he might be all right. And then of course she decides at the very end that she has to have a friend, and you realize that it really is all the mother's thing passed on to the child, and that Cartman's basically doomed."

Which of course was required — if only to keep the show, now in its 12th season, going strong.

Parker admits that of all the South Park characters, Cartman is his favorite.

Once a week, at least.