Accessibility links
Deportee Back Home After Near-Death Trip to U.S. Julio Cuellar is one of a growing number of El Salvadorans who illegally cross into the U.S. and are deported home. Although he had hoped to earn money to help his sick daughter, he suffered a harrowing journey in the Arizona desert that nearly killed him.

Listen
Deportee Back Home After Near-Death Trip to U.S.

This is the first in a three-part report. 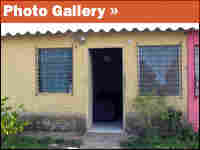 Last year, according to El Salvador's immigration ministry, 20,000 Salvadorans were sent back home from the U.S., compared to 3,500 who were deported in 2004.

On a recent blazing hot afternoon, security guards escorted 33 men and nine women from the tarmac at Cuscatlan International Airport in San Salvador into a cramped processing room.

Some deportees look defiant. Others look destroyed and lost. But they all seem to brighten as they file into rows of plastic chairs and find on each one a warm pupusa — the thick tortilla that is El Salvador's national dish. Officials try to bolster the group with speeches welcoming them home.

"Thank God you are here and in much better shape than many others," a police officer tells them. "Some return wounded or dead. But you are very much alive, ready to set off on your next trip if you choose!"

Quiet laughter fills the room as the deportees nod and cheer. Some say they do plan to go back to the U.S. as soon as possible. With few prospects in El Salvador and family still in America, they say they have nothing to lose.

But not Julio Cuellar.

In a small room, 45-year-old Cuellar gives a migration official his personal details.

Cuellar tells a government official that three months earlier, he abandoned his job as a state policeman to go to the U.S.

When the woman asks what he is going to do now that he's back in El Salvador, Cuellar pauses before responding.

"Well, I need to go to my house and talk with my family," Cuellar says. "More than anything, I need to explain the experience I've lived through."

The El Salvador native has diabetes and nearly died in the Arizona desert. When Cuellar ran out of insulin and became sick, the smuggler who he paid to help him cross into the U.S. abandoned him. He spent two days without food or shelter before the U.S. border patrol rescued him.

What would make someone do this — especially a middle-aged man with a full-time job?

Cuellar's daughter, Guadalupe, blames herself. She was pregnant when he left and had just been diagnosed with cancer. There was no money for treatment.

"My father had so many debts already," she says. "He wanted to pay those and make life easier for us, so I could quit my job and stay home with the children."

Guadalupe's parents long ago divorced, and her father raised her. For the past few years her mom has been working — illegally — in Texas.

She says her dad's coyote — or smuggler — assured him it would be an easy trip. But for three months, she didn't hear anything, and she wondered if something went wrong or if he had died.

Then a call came from the U.S. government that Cuellar was being deported three days later.

Cuellar's family — his daughter, grandson, great-nephew and sister — meet him in the airport parking lot. They've waited for hours in the hot sun, and as he emerges, they're in for a shock.

In his short time away, Cuellar has lost 40 pounds and aged visibly.

As they share long, tight hugs, the entire family breaks into loud sobs. Cuellar then cradles the 2-month-old granddaughter he is meeting for the first time.

Three hours later, the sun is almost setting in the lower-working class suburb where Cuellar and his daughter live. When they get off a bus, Guadalupe says her father is too ashamed for the neighbors to see him, so they use a dirt path behind the row of houses, then casually arrive at the front door.

The family squeezes into a living space the size of many an American walk-in closet, and Cuellar tries to explain his predicament.

For years, he says, he has gotten by on loans. In this country, Cuellar says, a paycheck alone doesn't even provide three meals a day.

Then, a few years back, he co-signed a loan for a friend. The friend disappeared, and the lender came after Cuellar.

After Guadalupe's cancer diagnosis, Cuellar says, he felt trapped and desperate, with no other option than seeking work in the U.S.

"You can kill yourself here working and never get ahead," Cuellar says.

But now that this gamble has failed, Cuellar is in worse straits.

To pay his smuggler, Cuellar gave the man the deed to his house. When Cuellar left the country, he lost his police job. And his near-death experience in the desert has left him with a host of ongoing health problems.

Cuellar swears he'll never try crossing to the U.S. again. But he still has no idea how to fix the problems that pushed him to go in the first place.