Accessibility links
Dogs Take Vow: To Serve and Herd Penguins On Middle Island off Australia, foxes were close to polishing off a colony of endangered Fairy penguins. Then chicken farmer Allan "Swampy" Marsh showed up with his penguin dogs. The canines turned out to do a great job of scaring off the foxes. 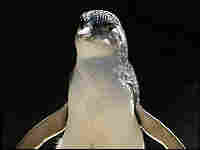 Guard dogs are now keeping an eye on endangered fairy penguins on an island off the southern coast of Australia. David Hancock/AFP/Getty Images hide caption 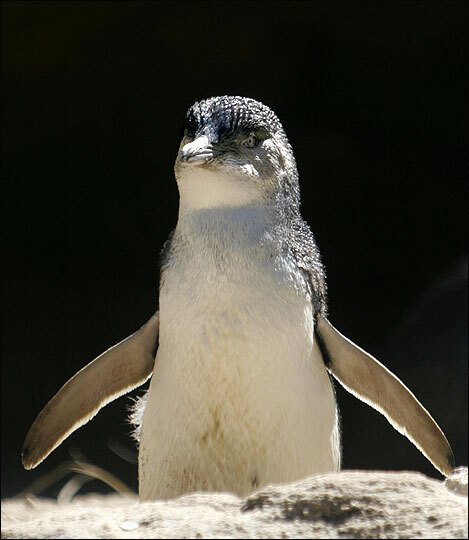 Guard dogs are now keeping an eye on endangered fairy penguins on an island off the southern coast of Australia.

Farmers have long used dogs to protect sheep, chickens and goats. Now, on an island off the southern coast of Australia, one farmer is using dogs to protect endangered penguins.

Every year, a mass of Fairy penguins comes to Middle Island to mate and lay their eggs. Allan Marsh, a farmer from the nearby town of Warrnambool, says these short, flightless birds have been making the trip for a long, long time.

"Little Fairy penguins have lived along this coast since penguins were invented, I suppose," he says.

Marsh raises free-range chickens on a farm next to a highway. He says that 20 years ago, the penguins on Middle Island made a deafening noise when they were breeding. Then, some foxes found the land bridge that connects the island to the mainland at low tide. Marsh says the foxes, which like to eat his chickens, appeared to love the taste of Fairy penguins.

"These are real free-range [birds] and they've got a salty flavor, too," he says, "It's like salt-and-vinegar chips to foxes, I reckon."

The foxes started preying on the penguins' eggs and chicks — almost wiping out the colony. Efforts to shoot and poison the foxes failed. It wasn't long before just a few dozen breeding pairs of penguins were left.

Then, a few years ago, Marsh — who is called "Swampy" by his friends — came up with a last-ditch solution: take the dogs that guard his chickens — or "chooks" as he calls them — and use them to guard the Fairy penguins.

The experts said it was a really stupid idea. They said the dogs would eat the penguins.

Then, last November, a local official who had run out of options told Marsh to bring out the dogs. Not long afterward, Marsh took a male guard dog named Oddball out to Middle Island. Within a week, Marsh says, the foxes were nowhere to be seen.

"The fox would not go within a mile and a half of the dog," Marsh says. "The dog would bark at foxes that it saw, [and] would also mark its territory to say, 'Hey, this is my place.'"

Marsh fed Oddball every day, but after three weeks on the island, the dog got lonely and swam home. Oddball's sister, Mollie, was sent out to replace him, followed by his brother, Ben. While these dogs were on the job, no fox tracks were discovered. When they left, the tracks came back.

In the wake of this success, Marsh says some conservationists are taking a look at the idea of using dogs to protect other vulnerable species.

"They haven't accepted it with open arms," he says, "but they've had their minds rattled and their eyes opened to the fact that there's another way of doing things."

But the penguins don't seem grateful. Marsh says Mollie found that out when she got too close to the sharp, hooked beak of one of the birds she was protecting.

"This penguin did a quick U-turn and latched onto her nose," he says.

Marsh says his dogs will go back on penguin-protection duty in a few months, when the birds return to Middle Island to breed.