Accessibility links
Clintons Moved Up Fast After White House Tax returns released by Sen. Hillary Clinton on Friday show just how far the Clintons have moved up since they left the White House: Their gross income for eight years exceeds $109 million. The move aims to silence one theme of criticism as she battles for the Democratic presidential nomination.

Tax returns released by Sen. Hillary Clinton on Friday show just how far the Clintons have moved up since they left the White House: Their gross income for eight years exceeds $109 million. The move aims to silence one theme of criticism as she battles for the Democratic presidential nomination.

Ron Elving asks: Will Democrats Care if the Clintons Are (That) Rich?

This is WEEKEND EDITION from NPR News. Scott Simon is away. I'm Susan Stamberg.

Hillary Clinton released seven years of tax returns yesterday, a move designed to silence one theme of criticism as she battles Barack Obama for the Democratic presidential nomination. The returns contain few new facts about Hillary and Bill Clinton's finances, but the bottom-line numbers show just how far the Clintons have moved up since they left the White House.

PETER OVERBY: Hillary Clinton had been under pressure to release the returns. There's a four-decade tradition of disclosure by presidential candidates. So yesterday, her campaign released tax returns covering the years 2000 to 2006, plus estimates for 2007.

Bill Clinton has been involved with a group of investment funds known as Yucaipa. He's advised two Yucaipa domestic funds and has been a partner in some overseas funds. Yucaipa's chairman is Ron Burkle, a California investor who became close to the Clintons in the 1990s. Burkle is a top Democratic money man and has done extensive fundraising for both Clintons.

Aside from Yucaipa, Bill Clinton invested in what appeared to be a hedge fund and also in a fund of hedge funds. But the Clintons' biggest source of income is his speeches. They account for nearly half of their gross income for the eight years.

The individual speeches aren't listed in the tax forms, but they are itemized in Hillary Clinton's senate report of personal finances, which are filed every May. In 2006, Bill Clinton typically charged $150,000 per speech, but sometimes he's made much more, as much as $500,000 in a single day.

He's spoken at motivational conferences overseas and at corporate meetings in this country. On occasion, he appeared at Wall Street firms, where executives have given heavily to Hillary Clinton's presidential campaign. Those firms included Citigroup and Lehman Brothers.

This is all a far cry from the Clintons' days in Arkansas politics, when they never even owned a home, and it shows that Hillary Clinton lives several rungs up the income ladder from Barack Obama.

His 2006 tax return showed an adjusted gross income of $983,000, yet in the primary so far, it's Clinton who has solid support among working-class Democrats.

Professor BRUCE LAURIE (Labor History, University of Massachusetts, Amherst): It's the most surprisingly aspect of her candidacy to me.

OVERBY: Bruce Laurie is a retired professor of labor history at the University of Massachusetts at Amherst. He says Hillary Clinton fits in a long tradition of wealthy Democrats with a populous message, and he doesn't expect that details of a multi-million-dollar income will cost her votes.

OVERBY: Especially now that Clinton is talking up workers' rights rather than free trade. 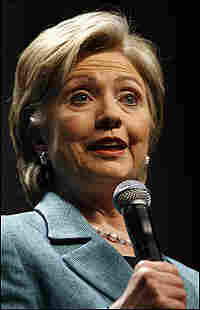 Comb through the Clinton's tax returns since 2000.

The New York senator made public the joint returns she and former President Bill Clinton filed for the years 2000 through 2006 — plus a summary of their income for tax year 2007, their most lucrative to date.

The two made more than $20 million between them in the most recent tax year, and a total of more than $109.2 million during the period beginning in 2000.

Most of the income came from the former president's speeches ($51.85 million) and from the sale of his two books ($29.6 million). Hillary Clinton's own book, Living History, has earned her more than $10 million. Proceeds from her earlier book, It Takes a Village were donated to charity.

The rest of the couple's income was from official salaries and from lucrative partnerships in which Bill Clinton participates.

Hillary Clinton has been under pressure for months from other candidates and from critics who say the Clintons had not been public about their wealth and its sources since they released their last return. In 2000, the last year they were in the White House, their adjusted gross income was $357,026 — nearly all of it from his presidential salary ($400,000). She spent most of that year campaigning for the Senate seat she now holds.

Her rival for the Democratic presidential nod, Illinois Sen. Barack Obama, released his returns for the years from 2000 to 2006 a week ago. Both he and Arizona Sen. John McCain, the presumptive Republican nominee, have said they will release their 2007 returns soon.

The issue of the Clintons' tax returns, and related questions regarding the financing of Bill Clinton's presidential library in Little Rock, Ark., has dogged the senator's campaign. Concerns about the library funding were raised because anonymous donors provided millions for the project and might someday expect special favors from the Clintons.

The tax returns disclose no sources of income that had not been previously known. The sources of speech income have been listed for years in Hillary Clinton's annual Senate disclosure forms. But the aggregate amount of their worth had not been as clear. The former president is among the highest-paid speakers in the world and can command as much as seven figures for a single speech.

But even if the returns don't create new controversy, they do pose a potential risk for Hillary Clinton's current campaign. The bulk of her support has come from white voters earning less than $50,000 a year. Blue-collar workers and those without a college education have tended to view Clinton as the candidate more sympathetic to their economic standing. Recent polls show that her lead in Pennsylvania, which holds its primary on April 22, is built substantially on such voters.

The first time a Clinton campaigned for president, in 1992, the couple could empathize directly with the middle class. Bill Clinton had been in public office or teaching law school throughout his own legal career, and the two had relatively few assets. They had not even bought a home. When Bill Clinton made the economy and the plight of working families his focus in 1992, his speeches resonated in a way that might be difficult to replicate today.

In fact, it is the contrast between where the Clintons stood financially before their White House years and where they stand now that may attract the most notice. Other presidents have made millions of dollars after leaving office, often from books and speeches. But the scale of their earnings has been more modest, and nearly all had been highly affluent before running for president.