President Bush travels to Russia to prepare for his meeting Sunday with Russian leader Vladimir Putin. It's the final summit before both men leave office. Bush hopes to persuade Putin to drop objections to U.S. plans for a missile defense system.

This is WEEKEND EDITION from NPR News. I'm Susan Stamberg. Coming up, behind the lenses of young Iraqi filmmakers.

But first President Bush travels to Russia today to prepare for his meeting Sunday with Russian leader Vladimir Putin, their final summit before both men leave office.

Mr. Bush hopes to persuade Putin to drop his strong objections to U.S. plans for a missile defense system.

GREGORY FEIFER: Eight years ago, when George W. Bush was first running for the presidency, he excoriated then-President Bill Clinton for his bantering personal relationship with Russia's Boris Yeltsin, so no one was prepared for what Mr. Bush would say after first meeting Vladimir Putin face to face.

President GEORGE W. BUSH: I looked the man in the eye. I found him to be very straightforward and trustworthy, and we had a very good dialogue. I was able to get a sense of his soul.

FEIFER: Critics pounced on the phrase, but Mr. Bush said his close personal relationship with Putin was central to improving ties between the two countries. After the September 11th attacks, Putin offered the White House his support, but the Kremlin was offended by Washington's failure to give anything in return.

Now, relations are in a deep freeze. Putin has unleashed a steady stream of anti-American rhetoric. During a security conference in Munich last year, he accused Washington of using unrestrained military power to spread regional conflicts around the world.

FEIFER: The rule of one state has overstepped its national borders in all areas, he said, including in economics, politics and the humanitarian sphere. It is trying to force itself on other states. Well, who would like that?

Putin has compared the United States to Nazi Germany and led opposition on Kosovo and the War in Iraq. Moscow is also building a nuclear power plant in Iran. Some experts say one of the reasons U.S.-Russia relations are so bad is precisely Mr. Bush's focus on his personal relationship with Putin, which has helped sever ties at every other level.

Rose Gottemoeller, director of the Carnegie Endowment's Moscow office, says many of the usual trust-building contacts between diplomats on issues such as nuclear weapons control, have simply been cut off.

Ms. ROSE GOTTEMOELLER (Director, Moscow Office, Carnegie Endowment): We've had a lot of summit statements, we've had a lot of warm words at summits, even a number of summit documents signed, but that kind of connective fabric that holds the relationship together has really not been present.

FEIFER: Mr. Bush hopes to sign a so-called strategic framework with Putin on Sunday, during what he's called his last heart to heart with the Russian president. One issue is the START nuclear weapons treaty, which expires next year, and which arms-control experts say is critical to global security.

But the biggest issue will be U.S. plans for a missile defense system in Europe, Moscow's main bone of contention with Washington. Putin has said plans to install parts of the system in Poland and the Czech Republic are directed against Russia and threatened to turn Europe into a powder keg.

Some say now Putin has succeeded in re-asserting Russia on the world stage, Moscow may be looking to soften its confrontation with the West. Whether or not Moscow really does, both sides are looking warily ahead to the next era in their relations under a new U.S. president and Putin's chosen successor, Dmitry Medvedev, who takes office next month. 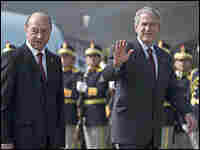 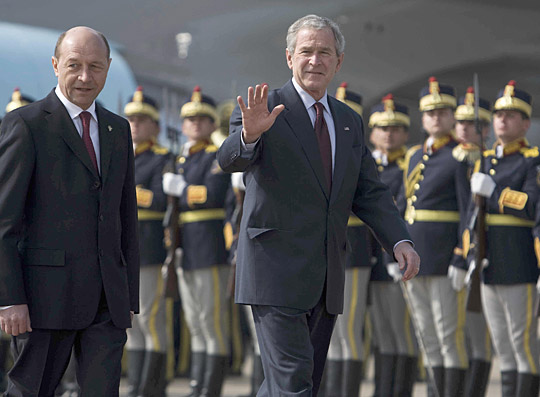 The current meeting of NATO leaders in Bucharest, Romania, offers President George Bush his last major chance to argue for one of his key foreign-policy objectives — continued expansion of the alliance's mission and its membership.

Bush wanted a bigger commitment of troops and resources to NATO's operation in Afghanistan, and he wanted to bring more former Soviet-bloc nations into the organization — a move that Russian President Vladimir Putin has strongly opposed.

Here are some of the items on the summit agenda that are most important to the United States:

Afghanistan: The United States, Canada, Britain and the Netherlands have called on their NATO partners to commit more fighting troops, especially to Afghanistan's southern provinces. That's where a resurgent Taliban has been more aggressive in the past year than at any time since the Islamic fundamentalist government was overthrown in 2001.

In comments leading up to the summit, Bush referred to expectations that France would add another 1,000 soldiers to the 1,500 it already has deployed to Afghanistan. Sarkozy said on Thursday that the number would be closer to 700, and it's still not clear how many troops other nations may offer. The United States currently has the largest number of foreign troops in Afghanistan — about 26,000.

U.N. Secretary General Ban Ki-moon and Afghan President Hamid Karzai are attending the summit to push for better coordination of military operations and development efforts in the country.

New NATO Members: The president failed to convince other NATO members that the former Soviet republics of Ukraine and Georgia should officially be put on track to join the alliance. But leaders at the summit did issue a statement welcoming the aspirations of the two former Soviet republics to join NATO and promising that they will eventually be members.

France and Germany were among the allies who voiced doubts about whether Georgia and Ukraine were ready to begin the membership process. Russia opposes NATO membership for the two countries, fearing the expansion of a potentially hostile military alliance along its borders. The NATO alliance was formed after World War II in large part to contain the former Soviet Union. Russia is not a member, but Russian President Vladimir Putin is attending the summit as an observer.

As expected, NATO did invite Croatia and Albania to join the 26 current members. Macedonia was also in line to join, but alliance members told the former Yugoslav Republic it must first resolve a dispute with Greece over its name.

Missile Defense: Alliance members issued a communique saying they accept a controversial Bush administration plan to locate parts of an anti-missile defense system in central Europe. The plan calls for interceptor missiles to be deployed in Poland, with radar detector installations in the Czech Republic.

President Bush says the system is designed to protect against missile attacks from countries such as Iran. Russia's President Putin opposes the plan, saying it would upset the strategic balance in the region by putting Russia at a military disadvantage.