Accessibility links
Forgotten Americans' 15 Pages of Fame Author Michael Farquhar has a new book of mini biographies called A Treasury of Foolishly Forgotten Americans. These are people whom, for some reason, official history has overlooked — among others, a swashbuckling female pirate and a "DO-take-prisoners" World War II Marine.

Author Michael Farquhar has a new book of mini biographies called A Treasury of Foolishly Forgotten Americans. These are people whom, for some reason, official history has overlooked — among others, a swashbuckling female pirate and a "DO-take-prisoners" World War II Marine.

Here's a very short introduction to an equally short subject: mini-biographies. Author Michael Farquhar has a new book of them called "A Treasure of Foolishly Forgotten Americans." These are people who for some reason official history has overlooked. Michael Farquhar joins me in the studio. Hi.

Mr. MICHAEL FARQUHAR (Author, "A Treasure of Foolishly Forgotten Americans"): Thanks for having me, Andrea.

SEABROOK: It's great to…

Mr. FARQUHAR: It's great to see you.

SEABROOK: …have you here. Now, I love that your book is 250 pages long and it has 30 biographies in it.

Mr. FARQUHAR: Yeah, and 30 is frustrating because there's thousands of these people who need to be rescued. But, you know, I had to limit it. I would love this to do well so I can write ten more volumes. Because these are the second tier of American history, the overlooked, neglected notables. We always seem to ignore them in favor of the familiar icons.

SEABROOK: Right. Well, okay. So let's start with one of them. Anne Bonnie, pirate of the Caribbean. A woman pirate.

Mr. FARQUHAR: I mean, nothing like a female pirate to pique my interest.

SEABROOK: Who is this woman?

Mr. FARQUHAR: She was a little bit off-centered woman from South Carolina who met up with this pirate, Calico Jack Rackham. He recognized that certain savage something in her.

SEABROOK: Even though she was from sort of the old South Carolina aristocracy.

Mr. FARQUHAR: Well, appears she was but she was also apparently a little unbalanced from the get-go. Fit right in with this pirate crew. Women were obviously never allowed on pirate ships. But Rackham made an exception for his girlfriend. And together the swashbuckling cutthroat crew terrorized the West Indies.

SEABROOK: Now, I love this. They go around, she screams like a banshee, wields this giant, you know, broad sword and they take over a ship. And among the crew on this ship they take over is a woman disguised as a man.

Mr. FARQUHAR: I know, exactly. So you end up with two female pirates on the same ship - Anne Bonnie and Mary Read, which is great. What I liked about her was how touching she was when Calico Jack, her boyfriend, was tried and was about to be executed. She came to see him and she snarls at him, if you fought like a man you wouldn't be hung like a dog.

SEABROOK: She was a tough broad.

Mr. FARQUHAR: She was a tough lady.

SEABROOK: Now, these biographies are so great for the age of Attention Deficit Disorder. I have to say I just devoured three of them.

Mr. FARQUHAR: That's about my attention span as well. And when you've got a few juicy anecdotes about these people who really did in so many ways contribute to the fabric of America, you don't need to, you know, start with our ancestors or anything like that.

SEABROOK: Michael Farquhar, I want to ask you about one more person: Guy Gabaldon, "The Pied Piper of Saipan." Now, this guy was 18 years old in World War II, he's from East Los Angeles, from a ghetto, a Chicano guy, and he single-handedly takes Japanese prisoners of war, hundreds of them by himself. Tell me about Guy Gabaldon.

Mr. FARQUHAR: Actually, you know, people sometimes ask me who my favorite is and it just might be this guy. This is the coolest kid I've ever stumbled across. You know, he was a lone Marine private. When he got to Saipan what he did was he would go out on these lone missions and he would go to various caves and convince the Japanese hiding in there that he had a whole force with him and that they better come out and surrender or that they would be roasted alive.

You know, and they would creep out and he would take them prisoner. It started with four or five and it, you know, then it was 50.

SEABROOK: And the truth was he didn't have anybody.

Mr. FARQUHAR: No. He was by himself. You know, really gutsy.

SEABROOK: I love that the military didn't like him doing this at first.

SEABROOK: But then he started bringing dozens of these prisoners of war back and said, okay, man, go ahead.

Mr. FARQUHAR: Exactly. But the pinnacle, you know, is after the last bonsai attack of Saipan. Guy Gabaldon captures a few Japanese. What he does is he's able to speak a spattering of Japanese because he was semi-adopted by a Japanese family in Los Angeles. And so he kind of talking with them, sharing cigarettes and making them a little bit at ease.

And these are not people, by the way, who are easily put at ease.

SEABROOK: These are suicide fighters.

Mr. FARQUHAR: Exactly. And, in fact, a number of them were hurling themselves off the cliffs of Saipan rather than be captured. So at the end, he convinces one of these guys to go back into the cave and talk to their superiors and he gets them, you know, to come out. And suddenly hordes of Japanese are streaming out of these caves. Eight hundred in all.

SEABROOK: Eight hundred - hundreds of men streaming out there.

Mr. FARQUHAR: And he is completely by himself.

SEABROOK: And he just alone walks them over to the American side of Saipan.

Mr. FARQUHAR: Exactly. Eight hundred - let's emphasize again. And, remember, Sergeant Alvin York in World War I who got all those people to surrender and won a medal of honor. Guy got tons more than Alvin York ever did and yet Alvin York gets the Medal of Honor and Guy Gabaldon was still waiting for his when he died in 2006. But he's a true hero.

SEABROOK: Michael Farquhar is the author of "A Treasury of Foolishly Forgotten Americans." Pirates, skinflints, patriots and other colorful characters stuck in the footnotes of history. Michael Farquhar, thanks very much.

Mr. FARQUHAR: Thanks, Andrea. It was great. I enjoyed it. 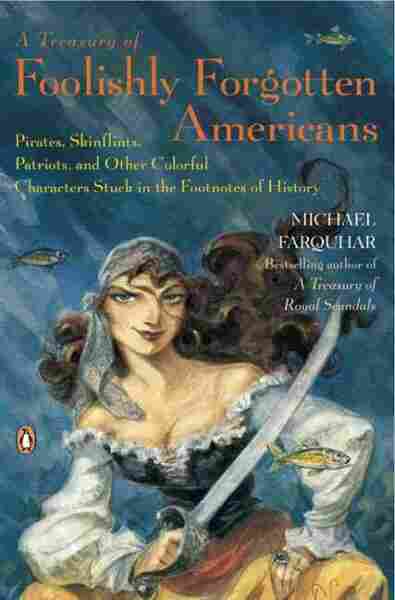 A Treasury of Foolishly Forgotten Americans

Piratees, Skinflints, Patriots, and Other Colorful Characters Stuck in the Footnotes of History