Accessibility links
'Silver Swan' Marks a Switch to Mystery for Banville Award-winning Irish novelist John Banville has written 14 novels. He has been called "one of the finest living writers of English-language prose." But he recently has been writing mysteries under another name — Benjamin Black. His new noir novel is called The Silver Swan.

Listen
'Silver Swan' Marks a Switch to Mystery for Banville

Award-winning Irish novelist John Banville has written 14 novels. He has been called "one of the finest living writers of English-language prose." But he recently has been writing mysteries under another name — Benjamin Black. His new noir novel is called The Silver Swan.

We're going to hear now about the latest novel from an Irish author whose last one, "The Sea," won the prestigious Man Booker Prize. John Banville's many literary novels have won him the kind of praise that involved hyperbole, typically, one of the finest living writers of English language prose. Now at 62, he has a new career and a new identity as a mystery writer. He's turned to writing hard-boiled crime fiction under the pen name Benjamin Black, and the critics are loving it. So the new novel? It's a noir, called "The Silver Swan." From New York, Tom Vitale has more.

TOM VITALE: John Banville says he began writing noir fiction more or less by accident three years ago. He had finished a script commissioned by the BBC and Australian television for a crime story set in the 1950s called "Christine Falls," but it was never produced.

Mr. JOHN BANVILLE (Author): The light bulb went on above my head one day, and I thought, I know what I'll do. I'll turn it into a novel. I didn't know whether I was going to be able to do it or not, but by lunchtime, I'd written 1,500 words - which, for John Banville, would be absolutely unheard of. Banville wouldn't be able to write 1,500 words in a month, let alone a morning.

VITALE: But Banville discovered that his alter ego, Benjamin Black, had a facility for writing crime fiction, and he had discovered the perfect setting.

Mr. BANVILLE: If you want to write noir fiction, Dublin in the 1950s is just the time to set it in. All that fog, all that cigarette smoke, all the Catholic guilt, all those secrets - just the period for noir fiction.

VITALE: Banville's first novel as Benjamin Black, last year's "Christine Falls," was hailed as one of the most artful noir mysteries in years and has been nominated for an Edgar Award. His new crime novel, the Silver Swan, picks up where Christine Falls left off, with the same hero sleuth, a pathologist named Quirke. Like all good mysteries, it begins with the body, as Quirke assess the corpse of an attractive blond fished out of Dublin Bay, an apparent suicide.

Mr. BANVILLE: Her body, which had not been in the water long enough for serious deterioration to have taken place was short and shapely - a strong body, strongly muscled, delicate in its curves and the sheer planes of flank and curve. Her face was not as fine-boned as it might have been. Her maiden name, Quirke noted, had been Ward, suggesting tinker blood. But her forehead was clear and high, and the swathe of the copper-colored hair falling back from it must have been magnificent when she was alive.

Mr. CHARLES MCGRATH (Writer, New York Times): What makes these books so remarkable is the quality of the writing and the atmospheric description of Ireland, Dublin in the '50s. This is Banville at something like the top of his form.

VITALE: Charles McGrath writes for the New York Times and is former editor of the Times Book Review. He says Benjamin Black's crime fiction is as well written as any of John Banville's so-called literary novels.

Mr. MCGRATH: This distinction we make between literature, high-brow books like "The Sea" and entertainment, the Benjamin Black books, is actually kind of a new one. And if you go back to the 19th century, Dickens wrote thrillers. He wrote murder mysteries, and no one saw a separation. I think it's a new invention.

VITALE: A lot of contemporary authors have used pseudonyms to distance their literary reputations from their more commercial genre fiction - Joyce Carol Oates as Rosamond Smith, Gore Vidal as Edgar Box, Anne Rice as A.N. Roquelaure to name a few. But the cover of the Silver Swan identifies author Benjamin Black as a pseudonym for John Banville. Banville says he just wants people to know he's doing something different.

VITALE: And he's moving in that direction at a fast clip. Banville has published three mysteries as Benjamin Black in two years. After "Christine Falls," the New York Times asked him to write a serialized crime story, which he called "The Lemur." And there's a new hard cover, "The Silver Swan."

Mr. BANVILLE: He had a picture in his mind for a sprawl and the wet rocks, a long swatch of that hair coiled around her neck like a think frond of gleaming seaweed. What he wanted had driven this handsome, healthy, young woman to fling herself on a summer midnight off Sandy Cove Harbor into the black waters of Dublin Bay with no witness to the deed, save the glittering stars and the lowering bulk of the Martello tower above her?

VITALE: John Banville says his crime writing is inspired by the noir films of the post-war era, along with the novels of James M. Cain and George Simenon. He says in his Benjamin Black novels, he sticks to the conventions of the genre, but he decided from the start not to write in cliche.

Mr. BANVILLE: And also, I determined that I would write about real people, not super sleuths. There's no such thing as a Sherlock Holmes. There never was, and never could be. Nobody's that clever. Poor old Quirke, my protagonist, is this sort of a - he's as stupid as the rest of us, you know. He misses the clues, and he doesn't know when people are telling him vital pieces of information. I like that about him. I like that sort of messy way in which books proceed, which is the way that life proceeds.

Mr. MCGRATH: They offer all the satisfactions of genre lit. You have your detective. You have your crime, and the thing gets wrapped up at the end. You'd be very unhappy if it didn't. And he meets that part of the bargain. And then, on the other hand, he gives you more than he's obliged to, in a way, on the other end, in terms of the atmospherics and the depth of the characterization. It's almost as if he can't help himself.

VITALE: John Banville says he feels compelled to keep writing serious fiction, and slowly. He's been working on a novel since 2004 which he says will take another two years to finish. In the meantime, he says his Benjamin Black mysteries are selling better than any of his Banville novels ever did. The 62-year-old author says he feels like a school boy who's been given two extra weeks of Christmas vacation.

Mr. BANVILLE: As Gore Vidal wonderfully said about Ronald Reagan, I am now in the spring time of my senescence. And to think that I can go off on a frolic of my own at this age as I teeter on the brink of old age, cheers me up enormously. And I had a lot of fun writing these books, and I expect to have a lot of fun writing more of them.

Mr. BANVILLE: Oh, don't say that. That's a terrible thing to say. These are supposed to be non-literary books. That'll put people off. Before you know where we are, I'll being accused of being a writer's writer again. 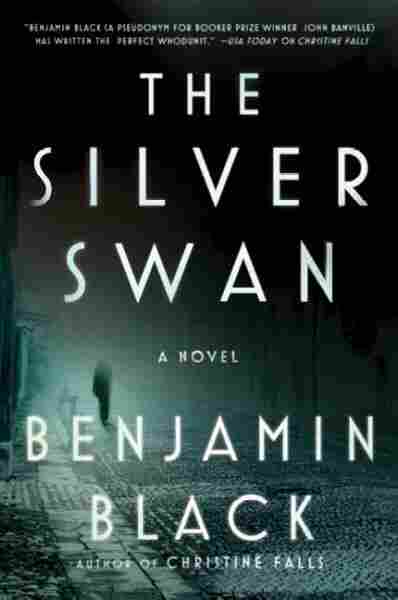