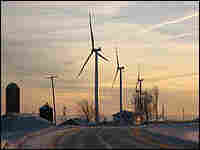 Lewis County, N.Y., is home to the Maple Ridge Wind Farm, which has transformed the look and sound of the rural landscape. David Baron for NPR hide caption 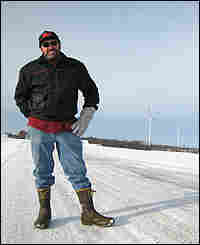 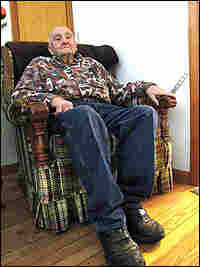 Ed Yancey says he allowed wind turbines on his farm because the lease payments help him out financially. David Baron for NPR hide caption

More from This Series

In Land Conservation, 'Forever' May Not Last
Private conservation agreements are often meant to last forever, but can "forever" be undone?

A Donkey's Tale: When Urban Sprawl Encroaches
Gambler was run out of town for braying, but residents are now trying to protect their rural rights.

Across the nation, the demand for renewable energy is booming and so is the construction of wind farms.

From a distance, the spinning windmills can look sculptural and graceful, but residents who live among wind turbines often have mixed and divergent feelings. This is the story of one family in upstate New York that's been divided by the wind.

A snow-covered road rises from the Black River Valley onto Tug Hill in Lewis County. This is Yancey Road, home to the Yancey family for generations.

"My parents lived here and my grandfather lived here," says 48-year-old John Yancey. He's lived here his whole life, and he's not pleased with the recent changes in the neighborhood.

"We've got nothing but windmills," he says.

The turbines are white, sleek and enormous — 20 stories tall, with blades three times longer than a Greyhound bus.

Yancey Road sits amid the Maple Ridge Wind Farm, the largest wind-power facility in the East, with almost 200 turbines spread across an area larger than Manhattan. The wind farm opened two years ago, and it has transformed the way this rural area looks and sounds.

"You'll hear that whoosh, whoosh, whoosh," says Yancey, imitating the spinning blades of the turbines. The noise is not as loud as city traffic or low-flying airplanes, but Yancey says when the wind comes from the right direction, the sound penetrates his house, his bedroom, his consciousness.

Yancey's biggest complaint involves one turbine that sits just across the street, and what makes it especially upsetting is that the turbine is on his father's land.

"I asked him not to have it installed there, to ask the company to either move it or delete it," says Yancey. "But they built it, and now I have to suffer with it."

John and a couple of his brothers are angry at their father for allowing seven turbines on his land. One brother, Herb Yancey, grows corn and hay on his father's farm. He says the wind towers and their access roads have fragmented the land and made farming "a nightmare."

Then there's their brother Gordon, who owns a nearby inn that's popular with snowmobilers. He used to enjoy an unobstructed view of the Adirondacks. Now he looks out on the wind towers.

His father, Ed Yancey, says there's a simple reason he agreed to windmills on his land: He receives lease payments of more than $45,000 a year.

His daughter, Virginia Yancey Lyndaker, sides with her father in this family dispute. She says he would have been foolish not to lease his land for wind towers.

"My theory is, if they're all going to be around you and you're going to see them and if you've got the property, you might as well partake, because why should you go and say ... 'I'm too important to take money.'"

A Rift in the Community

Money, fairness, a sense that decisions were not made democratically — these are the core issues that explain the Yancey family rift. And it's a rift that has split the broader community, too.

Many people here like the wind farm. It has brought jobs and tax dollars. Some consider the turbines beautiful. But resentment has bubbled up because those who have a lot of land and a lot of windmills make a lot of money, while their land-poor neighbors receive next to nothing.

"It has caused friction, family against family or neighbor against neighbor," says Arleigh Rice, town supervisor for Lowville, one of the three towns that host the Maple Ridge Wind Farm.

Wind projects have now been proposed for other communities in the region, and residents of those towns often seek his advice.

"When I go other places, I say, 'Sit down and think how you can benefit everyone,'" Rice says.

That question — how to make wind power something everyone can benefit from — was put recently to an eighth-grade science class at Lowville's middle school. The teacher was Debbie Yancey — Herb's wife, Ed's daughter-in-law.

She broke the students into teams and asked them to suggest ways to improve wind-farm development. Among the students' suggestions: Require that windmills be set back farther from neighboring homes. Hold a town vote on whether to allow the project. And don't let wind-power companies negotiate deals one-on-one with individual landowners.

"They have to do it as a community thing," said student Michael Hanno. "It'd make the windmills better."

"Then [the community] could figure out where they wanted to plant them," added classmate Jeremy Kingsley. "If someone didn't want it, it didn't need to be there. It could go somewhere else."

Student Ryan Birchenough argued that such a collaborative process would create "a win-win situation."

But wind power does involve tradeoffs, and they're not always easy. How do you weigh the potential harm to neighbors against the benefit to the planet? Is it worth giving up the vista you're used to in exchange for economic gains? Such questions don't just divide communities and families; they sometimes leave individuals internally conflicted.

John Yancey, who remains upset about the windmill across the street that keeps him up nights, is a union electrician. He helped build the wind towers, including the ones on his father's land.

"I thought that it possibly would be something that I'd be proud to say that, 'Yes, I helped build this turbine across the road,'" he says. "But now I'm eating my words."

And now that the windmills have come, John Yancey may go. For the first time in his life, he says, he is thinking about moving from Yancey Road.

More on the Shifting Ground Series