Accessibility links
British Sea Power: Rock in the Morning British Sea Power has a reputation for insane live performances, yet the band was working on only two hours of sleep when it came into KEXP. Supporting the new album Do You Like Rock Music?, the sextet showed no signs of slowing down on this set of anthemic rockers. 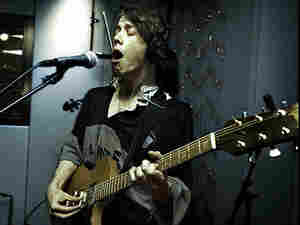 I didn't know what to expect of an early-morning in-studio performance by British Sea Power. The band's new record, Do You Like Rock Music?, fits somewhere between British Sea Power's crazed debut, The Decline of British Sea Power, and the more atmospheric follow-up, Open Season, and ranks as the group's best work. It's one that makes you excited to see the energy of the songs realized live.

However, I was also aware that the band had played the night before down in Portland, and turning around like that can destroy musicians' ability to play the next day, let alone show up at 8 a.m. to get on the air at 9. But they also have a reputation for total insanity live, complete with the story of touring cornet player Phil Sumner getting knocked out after falling from stage. Considering all that, I figured pretty much anything could happen.

When they arrived right on time that morning, you could hardly tell that they had just come off the brutal I-5 rush hour commute from Portland. They had that tired, road-weary look about them, but showed no signs of inability to play or any strong smell of alcohol — one of the ways a band will stay in its live-music vibe from the night before, which never works. From the first chord, British Sea Power showed just how great a live band it is. It was a complete sonic assault coming at me at all directions, with soccer chants, keyboards, and a number of guitars. I'm not sure how many; I lost count.

Yan and Hamilton, the two brothers in the band, kept switching from bass to guitar and back again, to the point where I didn't know who was who and where we were at in the session. I did realize that the highlight was "No Lucifer," and I believe there may have been fist-pumping in that studio that morning for that one — and not just mine. Thankfully, no one jumped off any stages, but we're on the ground floor, so it doesn't come up very often.