Second of a two-part report 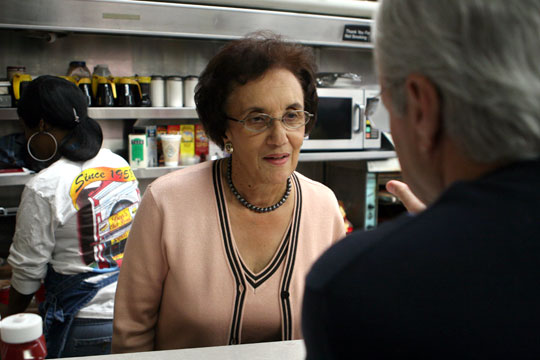 Virginia Ali, Co-owner of Ben's Chili Bowl, Discusses the Disruption Caused on U Street by Subway Construction in the 1990s 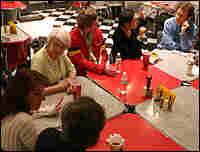 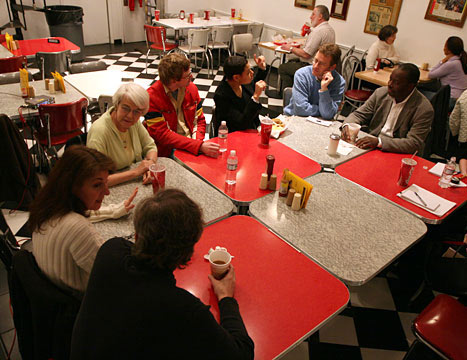 A History of U Street

Polly's Cafe was the first new business to open after the riots, at a time when even taxi drivers wouldn't drive down the 1300 block of U Street. Owner Cici Mukhtar is credited with helping to kick-start the neighborhood's revitalization. Coburn Dukehart, NPR hide caption 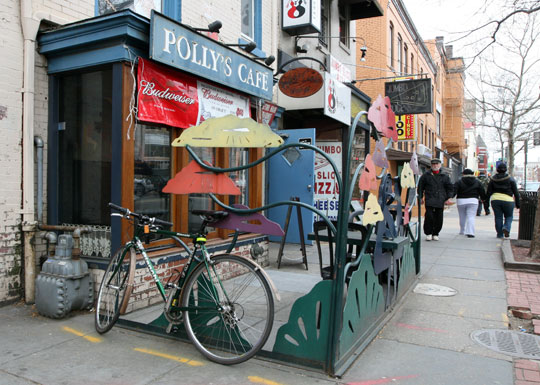 Polly's Cafe was the first new business to open after the riots, at a time when even taxi drivers wouldn't drive down the 1300 block of U Street. Owner Cici Mukhtar is credited with helping to kick-start the neighborhood's revitalization. 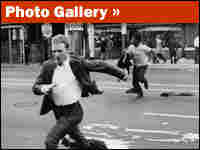 See the 1968 Riots and U Street Today

It has taken 40 years to undo the damage from a few days of rioting in Washington, D.C. The U Street corridor was decimated after fires set in riots following the assassination of the Rev. Martin Luther King Jr. in 1968.

"They said, 'You burned it up, you live with it,'" lifelong resident Stanley Mayes says. "There's a few of us around who still know the sordid details as to how this place came back from the abyss."

The smoke from the fires was so bad you couldn't breathe, Mayes says.

Now the area is marked by construction sites, an upscale wine shop and a luxury apartment building that has a sushi counter on the first floor.

And there's Ben's Chili Bowl, one of the only businesses to survive all the hard times since the riot. NPR invited a handful of residents to sit down to talk at lunchtime about the neighborhood's transformation.

From 'Classy Neighborhood' to Ghetto

Virginia Ali and her husband, Ben, opened Ben's Chili Bowl in 1958. "U Street was such a classy neighborhood," Virginia Ali says.

It was a row of nightclubs and theaters known as the "Black Broadway."

Yet after the riots of 1968, every plan to revive the area failed.

For at least 25 years, Ali says, "the area deteriorated into a real ghetto: influx of drugs, boarded-up buildings."

The riot "was the beginning of the low [point] of this neighborhood," she says. "It was what drove people away."

Cathy Smith is a Washington historian who has been involved in bringing tourists to the neighborhood to learn about its African-American history. As recently as the mid-1990s, she says, tour buses wouldn't stop in the U Street area.

"They would drive by and they would point out the window ... but they certainly wouldn't let anybody out of the bus," Smith says.

Even the good news turned bad. The city built a new office building here, but the construction of a subway line choked off traffic to local businesses.

Seeing Light in the Dark

Cici Mukhtar owns Polly's Cafe. It opened in 1992 — the first new business to do so in the neighborhood since the riots. What she calls "a cluster of young entrepreneurs" decided to take a chance on the area, which was affordable but largely abandoned and dark, Mukhtar says.

"There wasn't a lot of light," she says. "You couldn't get cab drivers. This was considered that dangerous. It was heroin; it was prostitution."

This is the neighborhood where Mukhtar chose to buy a restaurant. Others followed — black and white.

Phil Spalding, a local elected official, moved to the U Street area in 1999, when he says the changes started to accelerate.

"All of a sudden, developers had the opportunity of looking at blank land," Spalding says. Ironically, buildings destroyed in the riots had been cleared, providing the seeds for what eventually became a vibrant neighborhood, he says.

"Lying fallow for that 30 years allowed concepts in urban design to develop as well," he says. "And I think a lot of the projects that are going in now, they respect the streetscape."

And they also try to respect the sensitivities of the neighborhood's old residents.

It's typical to name upscale buildings after the neighborhood's famous black residents — "The Ellington Apartments," "The Langston Lofts."

Yet Mayes, the lifelong resident, says such gestures haven't eased all the tensions.

"Lots of people felt as though whites are taking over the neighborhood," he says.

Many black renters had to leave, as urban pioneers bid up the prices of historic brick row houses.

"And then there would be this discussion going on as though there was no history here, there had been no value in this community prior to the time that someone renovated their house," Mayes says. "And people would say, 'Why are you talking down to us as though there was no value here until you arrived? There were things going on in this community before you arrived here.'"

Whether the U Street area is truly integrated is an open question.

Spalding sees a "wildly divergent set of people" heading for the 13th and U Street subway stop in the mornings. But Smith wonders whether the neighborhood is socially integrated — do people of different racial backgrounds invite each other to their homes?

"One of the reasons I became so interested in the history of this neighborhood is that I have seen gentrification happen," she says, "and I always felt that this neighborhood, of all the neighborhoods in the city, has a chance to become a truly integrated neighborhood because I'm hoping the African-American community will never let this community go."

Mayes says the community's history — and it's telling — will be the key to its integration.

"As kind of an old head here, I look forward to the day when Cici is sitting around and she'll say, 'Well, you just don't know where this neighborhood came from.' Those things will come to pass," he says.