Accessibility links
May I Have Your Rather Valuable Autograph? Al Wittnebert, an elder statesman of the autograph business, says there is a code of honor in seeking famous signatures — and that it can be a lucrative way to make a living.

Listen
May I Have Your Rather Valuable Autograph? 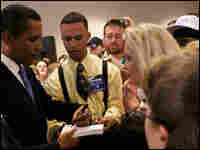 Imagine being asked to sign an autograph or pose for a photograph by every person passing on the street. Now imagine one memento seeker who won't take no for an answer. That seems to have happened to Sen. Barack Obama last week, when a man with a camera tried in vain to stop the presidential hopeful in Philadelphia.

Al Wittnebert, an elder statesman of the autograph business, saw video of the exchange. "I think Obama needs to get over himself," he says. "When you're in the public eye, especially running for office, you're supposed to kiss babies, pose for pictures. ... Whether [the fan] is selling it on eBay is irrelevant."

The man in question allegedly sought a picture from Obama several times that day. The senator's campaign says the man was a professional autograph reseller attempting to snag photos to accompany already valuable autographs.

But Wittnebert says seeking signatures and photographs from famous people is completely reasonable, especially from someone of Obama's stature. "That's the time to ask [Obama,] when he's on the campaign trail!" Wittnebert says. "If he gets into the White House, you have virtually no chance."

Wittnebert, chief financial officer of the Universal Autograph Collectors Club, is an autograph dealer and seeker. When he is on the hunt, he follows a few rules: "Never disturb anybody while they're eating. Never disturb anybody while they're with their families. The time to approach them is book signings, public events. ... That's part of the game."

You can always tell a fan from a collector or seller, he says, "when they want more than one. More than one means there's some kind of agenda." The younger guys, he says, have gotten very much like the paparazzi. "The invasion is more of a sport than anything else."

"When someone says 'No,' you walk away," he says. "Privacy is privacy. You don't want to cross that."

Wittnebert says this younger generation will stop at almost nothing in securing valuable celebrity scribble. "Bribery is not out of the question, especially people that work at airports, in the VIP lounges," he says. "There's always somebody that will take a few bucks." He tells a story about Paul Newman, who stopped signing autographs when people started slipping pieces of paper under the walls of bathroom stalls.

If not always glorious, the life of a professional autograph seeker can be lucrative, Wittnebert says. Much like successful photographers, he says, autograph seekers are rewarded for unique scores. "You're going to make better money by getting somebody that's very hot," he says. "You do better getting a Britney Spears than, say, a Burt Reynolds."

Things change constantly on the collectibles market, he says, where individual celebrities don't necessarily hold their value. "Burt Reynolds, during the 1970s, was the hottest actor there was," he says, but today his signature is worth far less. "You can invest in better things," he says. "You have to have a passion for the autograph to make it worth anything to you."

It is precisely a level of passion — an emotional engagement with an ephemeral token — that makes signatures valuable in the first place, Wittnebert says.

"What you have, basically, is a frozen moment in time. ... You have proof of that encounter," he says. "It's the most personal thing that each of us has, our signature. It shows who we are. It's an extension of ourselves. You're getting a personal memento from whoever it is that you particularly admire at a particular time."