She Left Me for Jesus 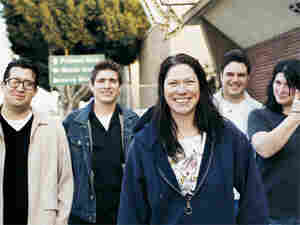 The Breeders' Mountain Battles was written while twin sisters Kim and Kelley Deal were touring with The Pixies; the disc was eventually produced by Steve Albini. While there's no obvious radio-friendly single like the band's hit "Cannonball," the songs here are scrappy, experimental, and eclectic. According to Langer, "That's kind of what you expect from The Breeders. This is a solid Breeders album for Breeders fans."

Nick Cave and the Bad Seeds also return with Dig Lazarus Dig!!! The album, which is loosely based on the biblical story of Lazarus, is loud, dark, and eerie. "He's the king of the murder ballad; of the dark humor, the dark setups for dark punchlines," Langer says. "He's in a lot of ways the original goth."

Philadelphia's Man Man uses fake names like Honus Honus, Chang Wang, and Pow Wow and wears warpaint on stage. Langer expects the band's latest record, Rabbit Habits — which includes an array of tubas, bicycle horns, and spoons — to be the album that gets people excited to see Man Man's carnival-esque live show on all the summer festivals.

Hailing from Chicago, Ike Reilly is a smart and witty singer-songwriter who draws comparisons to The Hold Steady and Bruce Springsteen . His latest, Poison the Hit Parade, collects demos from his previous three records.

Songs like "She Left Me For Jesus," on Hayes Carrl's major-label debut Trouble In Mind, might not get played by country radio. But, Langer says, "It's a solid yet irreverent yet deeply self-deprecating record."