Accessibility links
Presidential Candidates and the Update on Iraq Lawmakers on Capitol Hill hear from Gen. David Petraeus and Ambassador Ryan Crocker about security and political progress in Iraq. The two will address committees that include all three presidential candidates — Republican John McCain and Democrats Hillary Clinton and Barack Obama. Steve Inskeep and Renee Montagne report.

Listen
Presidential Candidates and the Update on Iraq

And there will be no shortage of opinions about the war all week. The American commander, General David Petraeus, has returned from Baghdad. He's talking to Congress along with the U.S. ambassador.

The leaders will address committees that include all three presidential candidates. Republican Senator John McCain supported the war, even when it seemed to doom his campaign. Democratic Senators Hillary Clinton and Barack Obama have argued over who is more critical of the war. General Petraeus will defend a plan to keep as many as 140,000 U.S. troops inside Iraq well beyond Election Day.

Analysis of the Patraeus, Crocker Hearings

Coverage from 'All Things Considered'

Testimony from the Hearings

Petraeus: 'A Period of Consolidation and Evaluation' Before Further U.S. Troop Reductions

Crocker: 'There is Progress' in Iraq

Crocker: Negotiations on the Future of the U.S.-Iraq Relationship 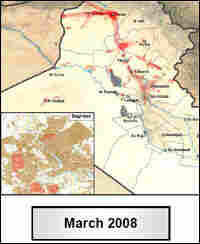 A map showing a decline in activity in Baghdad and elsewhere in Iraq by Al-Qaida and Sunni insurgents was among the charts Gen. David Petraeus presented to the Senate committee Tuesday. Senate Armed Services Committee hide caption

Explore NPR's coverage on the fifth anniversary of the beginning of the war.

In September, Gen. David Petraeus, the top U.S. commander in Iraq, testified before Congress about progress in the so-called troop "surge" strategy. The much-anticipated report adds fuel to the debate on whether to begin drawing down troops or approve more funding for the war. Explore coverage of his 2007 testimony.

The Toll of War in Iraq: U.S. Casualties and Civilian Deaths

Chart U.S. military casualties and civilian deaths in Iraq month by month against key events in the war — and hear about the lives of those who died fighting.

Gen. David Petraeus, the top U.S. commander in Iraq, told a Senate panel on Tuesday that American and Iraqi forces had made great strides toward the goal of bringing security to the country, but called for an open-ended suspension of troop withdrawals that he said could jeopardize progress.

Speaking to the Senate Armed Service Committee, the Iraq war commander told lawmakers that there had been "significant but uneven security progress" in Iraq since the so-called surge strategy put 30,000 more soldiers on the ground in Iraq.

He cited a marked decrease in the number of U.S. and Iraqi deaths since the surge, but warned that an upsurge of sectarian violence in recent weeks showed that the progress made was "fragile and reversible."

Petraeus recommended a 45-day "period of consolidation and evaluation" once the extra combat forces that President Bush ordered to Iraq last year have completed their pullout in July.

"At the end of that period, we will commence a process of assessment to examine the conditions on the ground and, over time, determine when we can make recommendations for further reductions," he said.

"Since September, levels of violence and civilian deaths have been reduced substantially. Al-Qaeda Iraq and a number of other extremists elements have been dealt serious blows," he told lawmakers.

U.S. Ambassador to Iraq Ryan Crocker spoke to the political stability in Iraq, saying the White House's troop plans in Iraq would not "tie the hands of the next administration."

He also pointed to progress made by the government of President Nouri al-Maliki, adding that continued U.S. support was vital.

"This does not mean that U.S. support should be open-ended," he said.

The recent violence in Baghdad and the southern city of Basra, where Iraqi forces have taken the lead against Shiite militiamen, showed "there is still very much to be done" to stabilize the situation, but "when viewed with a broader lens, the Iraqi decision to combat these groups in Basra has major significance."

"Immense challenges remain and progress is uneven and often frustrating slow, but there is progress," Crocker said. "Sustaining that progress will require continuing U.S. resolve and commitment."

Presumptive Republican presidential nominee Sen. John McCain of Arizona, who has expressed solidarity with the Bush administration's desire to stabilize U.S. troop levels at 140,000 after July's withdrawal, spoke before Petraeus.

McCain was careful to distinguish his support for last year's surge strategy from the previous "four years of mismanaged war."

A year after the surge, however, McCain said, "We're no longer staring into the abyss of defeat and we can look ahead to the prospect of success."

McCain's statement was briefly interrupted by spectators. Later, a gallery observer interjected "bring them home!" during a question to Petraeus.

Democratic presidential hopeful Sen. Hillary Clinton, who questioned both Petraeus and Crocker, called for an "orderly" withdrawal of troops. She praised U.S. forces as "the best in the world" but said the costs of the war in lives and money were placing an undue burden on the nation.

"The longer we stay in Iraq, the longer we divert challenges from Afghanistan and elsewhere in the world," she said.

Clinton acknowledged "the very difficult dilemma that any policy in Iraq poses to leaders," but said that Iraqi leaders had consistently failed to deliver on promises of progress.

Democratic presidential candidate Sen. Barack Obama is on the Senate Foreign Relations Committee, where Petraeus and Crocker appeared Tuesday afternoon. Obama pressed them on their standard for success in Iraq. Obama said he worries that the goals — completely eliminating al-Qaida and Iranian influences — may be impossible to achieve and troops could be there for 20 or 30 years in a fruitless effort.

"If, on the other hand, our criteria is a messy, sloppy status quo but there's not huge outbreaks of violence, there's still corruption, but the country is struggling along, but it's not a threat to its neighbors and it's not an al-Qaida base, that seems to me an achievable goal within a measurable timeframe," Obama said.

Sen. Richard Lugar said "appealing for more time to make progress was insufficient" and that the U.S. needs a "definable, political strategy that recognizes the time limitations we face and seeks a realistic outcome designed to protect American vital interests." Lugar, of Indiana, is the Foreign Relations Committee's ranking Republican.

Sen. Joseph Biden, D-Del., who chairs the panel, asked Petraeus to estimate on a scale of one to 10 how close the U.S. is to being able to significantly reduce forces in Iraq. Petraeus said, "I think we're in a six or a seven, or somewhere along there."

Biden responded: "I can't think of any circumstance where you fellows are likely to recommend no matter how bad things got where you would withdraw. But I may be mistaken. That's part of everyone's concern."

In Iraq, Shiite cleric Muqtada al-Sadr threatened on Tuesday to end a cease-fire he imposed on his militia last August, raising the prospect of further violence.

Despite the cease-fire, Sadr's followers have clashed with Iraqi government troops and U.S. forces in the south of the country and Baghdad in recent weeks, leading to Iraq's worst violence since the first half of 2007.