Accessibility links
Syria Sees Influx of Arabic Language Students The country's inexpensive tuition and housing rates are drawing students from Europe and America who want to study Arabic. Some are finding Syria to be a much more complicated place than the rogue state and sponsor of terrorism they heard about back home. 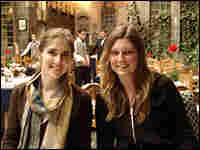 Ashley Milco of Chicago (left) and Kara Francis of Wilmington, Del., are two of the growing number of Americans venturing to Syria to study Arabic. Peter Kenyon, NPR hide caption 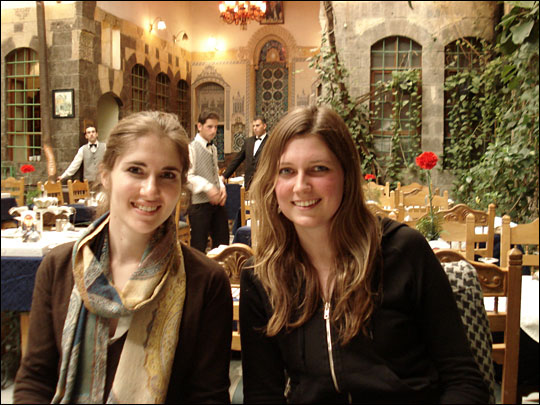 Ashley Milco of Chicago (left) and Kara Francis of Wilmington, Del., are two of the growing number of Americans venturing to Syria to study Arabic.

Syria may be a largely closed society, but students from Europe and America are flocking there to study Arabic. They're drawn by the inexpensive tuition and housing rates, as well as the relative purity of the Syrian dialect, which is considered close to classical Arabic.

At Damascus University, not far from the heart of the capital, students gather in small groups or study alone. Snatches of conversations in English, German, French, Italian and Japanese, in addition to Arabic, resound outside the school's Higher Language Institute. With the increased demand for Arabic speakers in the United States and elsewhere since 2001, Syrian language programs expect their enrollment of foreign students to keep rising.

Many of these young men and women are finding Syria to be a far different place than the rogue state and sponsor of terrorism it might have been depicted as back home.

"I love it," says Anis Turner, a British student who arrived in Damascus seven months ago. "It's a beautiful, beautiful city. Some people, maybe from the West, when they come here they think it's a bit chaotic, but Syria for me is the safest country I've ever been in. I feel safer in Damascus than I do feel in London."

American students Kara Francis and Ashley Milco initially signed up for regular classes in Arabic, but they switched to a tutor because they felt it helped them learn the fairly difficult language more rapidly. Both are pleased at the complete lack of anti-Americanism among the Syrians they have met so far.

"Every time I tell a Syrian that I'm American, they just get really excited and happy," says Francis, 25.

Politics are usually discussed, she adds, but not for long.

"You know, they say that they don't like [President] Bush, and I tell them I don't either," she laughs. "Syrians can't really talk about their own politics very much. So the topic of conversation moves away from politics to things like family and schooling."

But the difficulties that young Syrians face is an eye-opener for foreign students. If Syria was hoping that these language programs would amount to a charm offensive among impressionable young Western students, the reality is quite a bit more complicated. Francis says living in Syria, while exciting, has given her a more sobering view of the country than most visitors get.

"I think it's easy to idealize this place before you come, and it's easy to walk around as a tourist, especially, and think that it's great, it's lovely, the old city is charming, the people are so friendly and welcoming," she says. "But if you spend a little bit longer here you see the really kind of — the bad things about this place. You see the poverty — you see the way the regime's policies have trickled down to the populace."

Francis, who left an entry-level journalism job in Washington, D.C., to pursue her language studies, says she has mixed feelings about the country.

"I'm conflicted, because I really want to like it. I really want to enjoy being here. But it is hard, and I think it's irresponsible when journalists and other people come and walk away and talk about how wonderful it is," she says. "I think it's being here as a woman. That's certainly a difficult thing to get used to. And seeing how Syrian men treat you as a foreign woman, that's difficult."

Both Francis and Milco say they had a hard time adjusting to the aggressive attentions of Syrian men, and that they were shocked at the lack of opportunity for Syrian women. But they also say they are grateful to get a peek into a land most Americans know only in caricature, if at all.

Milco, 23, says her time in Syria has also given her an "on-the-ground perspective" of the country and its role in Middle Eastern politics. "I've been really happy with how open people are. Not as many girls here wear headscarves as I thought," the Chicago native says. "But at the same time, I think it's a city that's somewhere in the middle of the developing world and the developed."

In the end, the students say that may be the best lesson of all: not to simply be dazzled by Damascus, but to come away with a more nuanced picture of a society that had been largely opaque.