Accessibility links
My Brightest Diamond Sings with Strings In college, Shara Worden studied opera during the day and sang in funk bands at night. As the leader of My Brightest Diamond, she has synthesized the best of her classical training and pop inclinations. Hear the band play songs from its forthcoming album.

My Brightest Diamond Sings with Strings

From the Top of the World 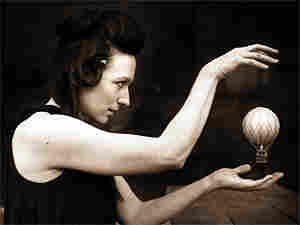 Shara Worden grew up in Ypsilanti, Mich., where her mother was an organist in a Pentecostal church and her father was an award-winning accordion player. She went on to attend college in Texas to study opera. After that, she moved to New York, where she became immersed in pop music, and ended up as a backing vocalist for Sufjan Stevens.

With her band My Brightest Diamond, Worden writes music that sounds a little bit indie-rock, a little bit classical, and a lot in between. The group's forthcoming second album is titled A Thousand Shark's Teeth.

The current lineup of My Brightest Diamond, which includes a full string quartet, visited WNYC to play a few new songs. Between performances, Worden spoke with host John Schaefer. She says she's been working on this particular hybrid of modern classical music and intricate rock for about six years.

"I think for me, if I stay in stringland too long, then I start twitching — where's my distorted electric guitar?" Worden says. "And then I'll go play with the rock trio and then be like, 'Where's my strings? I miss them.'"

Many of the songs on A Thousand Shark's Teeth actually predate Worden's first album with My Brightest Diamond, called Bring Me the Workhorse. She says that the project was initially intended to use strictly string-quartet arrangements. But over time, she tweaked the songs to add more timbres, and finally ended up scrapping and reconfiguring them.

Worden says that lyrically, she also set out to explore the connection between the living and the dearly departed. She points to a song called "Goodbye Forever."

"It was kind of investigating... the distance in relationships either near or close, and kind of paralleling that with the earth's relationship to the sun," Worden says. "And so I imagine the sun — if we're in kind of a proper relationship with it, that it's like the light is tingling all over us like little pinpricks, and like a thousand shark's teeth."

For Worden, it marks a more harmonious synthesis between her classical training and her rock and pop fancies that she's long tried to achieve. She says she had felt like two separate singers in the past.

"I was writing songs even when I was studying in school," Worden says. "And for me they were like really separate activities. So I would be pursuing a classical degree in school, and then singing with funk bands and writing my own music at night.

"So it's actually been something that's been quite a bit of a struggle for me," she adds. "At a certain point, I had to realize that time — and what I could do most — what was perhaps more suited to my personality was writing my own songs."

The new record also marks the evolution of the My Brightest Diamond project into a distinct identity.