Accessibility links
Clinton Rejects Petraeus' Call to Slow Troop Pullout As Gen. David Petraeus answered questions from a Senate panel about the status of the war in Iraq, Sen. Hillary Clinton suggested it's time "to begin an orderly process of withdrawing troops." The Democratic presidential hopeful discusses her approach to Iraq and her push to woo superdelegates with Michele Norris. 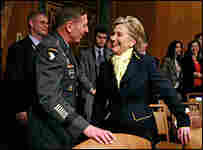 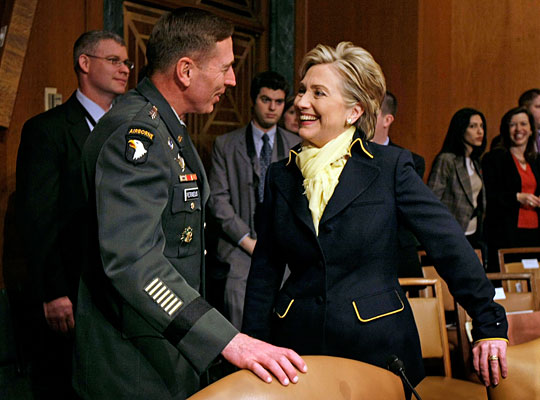 Democratic presidential candidate Sen. Hillary Clinton says that despite calls from the top U.S. commander in Iraq to suspend troop pullouts beyond this summer, it is time for the U.S. to begin an "orderly process" of withdrawal from Iraq.

Gen. David Petraeus, along with U.S. Ambassador to Iraq Ryan Crocker, delivered his assessment of the "fragile" progress in Iraq in testimony before two Senate committees on Tuesday. Petraeus told skeptical senators that the U.S. had made "significant" but "reversible" progress in Iraq since the so-called surge strategy put an additional 30,000 U.S. troops on the ground.

All three major presidential candidates sit on the Senate committees that heard from Petraeus and Crocker.

In an interview with Michele Norris, Clinton says that Tuesday's testimony "actually supports my position" calling for the withdrawal of U.S. troops.

"This testimony once again speaks about progress, points to small baby steps that are blown into great advances without much evidence of that," Clinton says. "The sad truth is the point of the surge — which was to give the Iraqi government the space and time to do what it should do — has not created that outcome at all."

Calling for a Pullout

Clinton says if she were elected president and took office in January, she would withdraw troops within 60 days. She says such a withdrawal would be planned in consultation with military leaders and security advisers.

"Even Gen. David Petraeus has admitted that Iraqis have not made the progress or taken the decisions that they were expected to do by this time, and there is no military solution," Clinton says.

Clinton recently has been criticized for failing to take a leadership role in attempts to legislate a troop pullout. In an April 3 article, the Los Angeles Times examined congressional records on legislation pertaining to the Iraq war. The story concluded that Clinton has largely stayed on the sidelines of the debate over whether to withdraw U.S. troops. Clinton counters that she began calling for a shift in the Bush administration's Iraq policy "at the end of 2005."

"Up until that time, I was a very outspoken critic of many of the policies and their consequences," she says.

Clinton says she has introduced two pieces of legislation that would require the Bush administration to get congressional approval for long-term agreements with the Iraqi government and that would lay out conditions for an orderly withdrawal of troops from Iraq.

When it comes to the presidential race, Clinton says the battle for the Democratic nomination is not over — it's a "fluid process," she says.

Both she and her rival, Illinois Sen. Barack Obama, are actively wooing superdelegates. But Clinton's campaign has also suggested that pledged delegates — who are awarded to each candidate based on the results of primaries and caucuses — should also be allowed to switch their allegiances.

"There is some fundamental misunderstanding of the way this whole nominating process works," Clinton says. "Every delegate has the right to choose whom they will vote for. ... At the end of the day, there is no requirement that anybody do anything other than make their own best judgment."

Clinton counters critics who attack her for not dropping out of the Democratic presidential race by noting that she nor Obama has "the number of delegates to win."

"It would have been like calling the championship game last night, with two minutes left to go, because somebody was ahead — and that's not how it turned out," Clinton says, referring to Monday night's NCAA game between Kansas and Memphis.