Accessibility links
El Salvador Struggles to Re-Absorb U.S. Deportees This week, NPR's Jennifer Ludden looked at what happens when a country — in particular, El Salvador — has to take back a large number of its own nationals deported by the United States. What are the effects of their migration and their return?

This is the third in a three-part report.

This week, NPR's Jennifer Ludden looked at what happens when a country — in particular, El Salvador — has to take back a large number of its own nationals deported by the United States.

Steve Inskeep talks to Ludden about Salvadorans' migration, the effects of their departure, and the impact of their return.

Deportee a Stranger in His Homeland

Deportee a Stranger in His Homeland

This is the second in a three-part report. 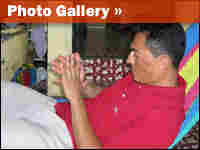 When Omar Giron returned to El Salvador — the country he left 20 years ago — it hardly felt like a homecoming. Having lived in the United States for so long, he considers himself American.

Giron and his family fled El Salvador's civil war when he was a teenager. They received protected legal status from U.S. officials. But after repeated run-ins with the law, Giron was stripped of his legal standing and deported last December.

Although he is resigned to his new life in his old homeland, he has found the transition depressing and difficult.

Perhaps nothing marks Giron an outsider more than his never-ending daily battle against dust.

Adjusting to a New Life

Dust is everywhere in San Miguel, the city in eastern El Salvador where Giron lives — and refers to as "Saint Michael." The house he shares with his aunt and grandfather sits at the intersection of two dirt roads, and with no screens to cover the windows, the dust floats in freely.

So every day, Giron turns on the outside spigot and waters down the road.

"Three times a day," he says. "In the morning, around lunchtime and in the evening."

In a tropical climate where nearly everyone wears flip-flops, Giron insists on sporting black leather shoes. But they get dusty, so he polishes them obsessively.

Giron jokes about being a misfit. He was on anti-anxiety pills his first month back in El Salvador, and he says he would sit on his bed for hours and cry, mostly for his four children from two previous marriages. They still live in Virginia.

The upheaval began a year ago with a parking ticket. When Giron went to pay it, a string of convictions for driving under the influence and a domestic violence conviction finally caught up with him. He spent 10 months in jail before being deported to El Salvador. He says he has only himself to blame, but he wishes he had another chance.

"It's not like I sell drugs in the street or to children, or [that I'm a] rapist or killer. I'm not like that," Giron says. "I'm just a hard-working man who led a normal life, like we all do over there with Americans. I just feel like I'm one of them."

Part of his American identity stemmed from his work as a certified welder — the more dangerous the gig, he says, the better.

Giron says he worked on bridges in Virginia, on the Beltway surrounding Washington, D.C. and at the Quantico Marine base. Companies came to know him as "the skinny guy that talks a lot" but who was a "heck of a worker," he says.

The reputation he developed made it even harder to accept that here, in his homeland, nobody knows him. Giron worries he will never get a decent job without connections.

And he's given up trying to work as a welder.

Giron interviewed for a job at a call center, figuring his English would be a big plus. He was told he needed to know more about computers, so he's still looking. But in a country where the United Nations estimates that half the population is either unemployed or underemployed, landing any job is no sure thing.

Job prospects aside, Giron knows he's lucky. The roomy house here with a shaded courtyard was paid for with money sent back over the years by his family in Virginia. The remittances also paid for a window air-conditioning unit and cable TV, which are relative luxuries in this desperately poor country.

As she cooks meat patties in the large kitchen, Giron's Aunt Lucia says her nephew is frustrated at having to depend on money sent from the United States.

"I tell him to calm down, this is how we live here," she says. "With each dollar we get, we change it into nickels and pennies, then spend them carefully."

After all this time, does Giron seem more Salvadoran or American?

"Americano!" Lucia says with a laugh.

Giron says people can spot immediately that he's from the United States by the way he talks, the way he walks, how he carefully lifts his pants and jumps over potholes.

"I walk free and I don't have no fear. And the people here, they look back, always look back," Giron says. "Whoever's following them, chasing them, people think they're gonna rob you."

And sometimes they do. The first time Giron ventured out at night to go to a concert, he had his $80 Puma sneakers stolen by a 10-year-old.

El Salvador's rampant, gang-fueled crime is one of his biggest worries. Some of those gangbangers were kicked out of the United States, which is why Giron never tells people that he was deported.

"They think you're a criminal or a serious killer," he says. "And they don't trust you."

Under the terms of his deportation, it will be years before Giron can even apply to re-enter the United States. By that time, it's hard to say where he will feel he belongs.

Until then, he says, he dreams of returning to Virginia.

"Every day I want to go home," Giron says.