Accessibility links
'Golden Memories' of Father-Daughter Bonding As a teenager, the scariest person in Jen Lancaster's life wasn't Freddie Krueger or Michael Myers, but Ronald Lancaster, her father — until the night they laughed themselves silly, courtesy of Jean Shepherd. 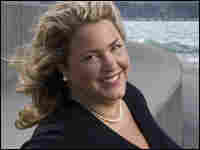 Jen Lancaster's newest memoir is Such a Pretty Fat. When not writing, she's vacuuming, because she has two shedding dogs, four shedding cats and one shedding husband. Courtesy of Jen Lancaster hide caption

I was upstairs when I first heard the noise. Home alone on a Friday night due to a geometry-related offense (I hate you, Pythagoras and your theorems!), I reacted like every other teenage slasher-film victim, running directly toward the source. I flew down the stairs and through the breakfast nook, only to come face to face with the scariest person of all — not Freddie Krueger or Michael Myers, but Ronald Lancaster, my father.

Back in early 1983, my dad was tasked with keeping unions from organizing in his company's distribution centers. His work pulled him away from home for months on end. Even though he'd been fortunate enough to ride out most of the miserable Indiana winter in Atlanta, his job stress was overwhelming, and his good humor was practically nonexistent. Yet when I clattered down the steps, there was my dad, and he seemed ... happy. I was as surprised to see him smiling as I was to see him home, so I decided to endure whatever boring British farce he had on and joined him in the family room.

My father was watching a movie called The Star-Crossed Romance of Josephine Cosnowski, the story of Ralphie Parker's unfortunate date with a beautiful Polish girl from East Chicago. Turns out the noise I'd heard was laughter, because the show was dramatic, but hilarious. My father and I spent the next hour cackling so loud our dog hid under the kitchen table.

When it was over, my father told me Jean Shepherd had written what we'd watched. Dad explained he'd become a fan when Shepherd first narrated his short stories on the radio. He told me that if I looked on his bookshelf, I'd find the Josephine Cosnowski story and many others in Wanda Hickey's Night of Golden Memories: And Other Disasters.

I grabbed the book and headed back upstairs, where I immersed myself in Shepherd's distinctive voice. I snorted over stories of bad country neighbors and their rogue ham-stealing dogs in "The Grandstand Passion Play of Delbert and the Bumpus Hounds" (later to be immortalized as turkey-stealing bloodhounds in the film A Christmas Story).

My stomach ached as Shepherd recounted his heroic intake of junk food in "County Fair!" His description of being jammed into a 15-inch space of back seat carved out of picnic baskets and inner tubes hit a little too close to home in "Ollie Hopnoodle's Haven of Bliss." Yet that story made me nostalgic for my own miserable family road trips, and I recalled having contests with my brother over who could eat and drink the least, because my dad considered rest stops a luxury.

I finished Wanda Hickey in a few hours. Later, over blueberry pancakes, Dad and I laughed about our favorite scenes, enjoying the kind of relaxed banter we hadn't had since my childhood. Conversations about the book led to him telling stories about his wild teenage years and, suddenly, my performance in geometry didn't seem so dire.

When I was 15, I didn't fully appreciate Shepherd's ability to turn simple childhood injustices into Greek tragedies. I had no idea that one day, Jerry Seinfeld would credit Shepherd for forming his entire comedic sensibility. I didn't know that later that year, Shepherd's movie A Christmas Story would become a tradition for millions of American families. All I knew was that he wrote a book that helped my dad and me build a bridge between generations and find some common ground. And that was enough.

Excerpt: 'Wanda Hickey's Night of Golden Memories: And Other Disasters' 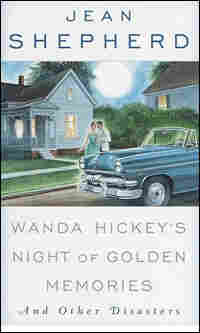 "SEE YOU AT THE ROOSTER."

Wanda, Schwartz and Clara Mae piled in on the damp, soggy seats and we took off. Do you know what happens to a maroon-wool carnation on a white-serge lapel in a heavy June downpour in the Midwest, where it rains not water but carbolic acid from the steel-mill fallout? I had a dark, wide, spreading maroon stripe that went all the way down to the bottom of my white coat. My French cuffs were covered with grease from fighting the top, and I had cracked a thumbnail, which was beginning, to throb.

Undaunted, we slogged intrepidly through the rain toward the Red Rooster. Wedged against my side, Wanda looked up at me — oblivious to the elements — with luminous love eyes. She was truly an incurable romantic. Schwartz wisecracked in the back seat and Clara giggled from time to time. The savage tribal rite was nearing its final and most vicious phase.

We arrived at the Red Rooster, already crowded with other candidates for adulthood. A giant red neon rooster with a blue neon tail that flicked up and down in the rain set the tone for this glamorous establishment. An aura of undefined sin was always connected with the name Red Rooster. Sly winks, nudgings and adolescent cacklings about what purportedly went on at the Rooster made it the "in" spot for such a momentous revel. Its waiters were rumored really to be secret henchmen of the Mafia. But the only thing we knew for sure about the Rooster was that anybody on the far side of seven years old could procure any known drink without question.

The decor ran heavily to red-checkered-oilcloth table covers and plastic violets, and the musical background was provided by a legendary jukebox that stood a full seven feet high, featuring red and blue cascading waterfalls that gushed endlessly though its voluptuous facade. In full 200-watt operation, it could be felt, if not clearly heard, as far north as Gary and as far south as Kankakee. A triumph of American aesthetics.

Surging with anticipation, I guided Wanda through the uproarious throng of my peers. Schwartz and Clara Mae trailed behind, exchanging ribald remarks with the gang.

We occupied the only remaining table. Immediately, a beady-eyed waiter, hair glistening with Vaseline Hair Oil, sidled over and hovered like a vulture. Quickly distributing the famous Red Rooster Ala Carte Deluxe Menu, he stood back, smirking, and waited for us to impress our dates.

"Can I bring you anything to drink, gentlemen?" he said, heavily accenting the gentlemen.

My first impulse was to order my favorite drink of the period, a bottled chocolate concoction called Kayo, the Wonder Drink; but remembering that better things were expected of me on prom night, I said, in my deepest voice, "Uh ... make mine ... bourbon."

Schwartz grunted in admiration. Wanda ogled me with great, swimming, lovesick eyes. Bourbon was the only drink that I had actually heard of. My old man ordered it often down at the Bluebird Tavern. I had always wondered what it tasted like. I was soon to find out.

"Well, in a glass, I guess." I had failed to grasp the subtlety of his question, but the waiter snorted in ap¬preciation of my humorous sally.

Rocks? I had heard about getting your rocks, but never in a restaurant. Oh, well, what the hell.

All around me, the merrymaking throng was swinging into high gear. Carried away by it all, I added a phrase I had heard my old man use often: "And make it a triple." I had some vague idea that this was a brand or something.

"A triple? Yes, sir." His eyes snapped wide — in respect, I gathered. He knew he was in the presence of a serious drinker.

The waiter turned his gaze in Schwartz' direction. "And you, sir?"

"Make it the same." Schwartz had never been a leader.

The die was cast. Pink ladies, at the waiter's suggestion, were ordered for the girls, and we then proceeded to scan the immense menu with feigned disinterest. When the waiter returned with our drinks, I ordered — for reasons that even today I am unable to explain — lamb chops, yellow turnips, mashed potatoes and gravy, a side dish of the famous Red Rooster Roquefort Italian Cole Slaw — and a strawberry shortcake. The others wisely decided to stick with their drinks.

Munching bread sticks, Wanda, Schwartz, Clara and I engaged in sophisticated postprom repartee. Moment by moment, I felt my strength and maturity, my dashing bonhomie, my clean-cut handsomeness enveloping my friends in its benevolent warmth. Schwartz, too, seemed to scintillate as never before. Clara giggled and Wanda sighed, overcome by the romance of it all. Even when Flick, sitting three tables away, clipped Schwartz behind the left ear with a poppyseed roll, our urbanity remained unruffled.

Before me reposed a sparkling tumbler of beautiful amber liquid, ice cubes bobbing merrily on its surface, a plastic swizzle stick sporting an enormous red rooster sticking out at a jaunty angle. Schwartz was similarly equipped. And the fluffy pink ladies looked lovely in the reflected light of the pulsating jukebox.

I had seen my old man deal with just this sort of situation. Raising my beaded glass, I looked around at my companions and said suavely, "Well, here's mud in yer eye." Clara giggled; Wanda sighed dreamily, now totally in love with this man of the world who sat across from her on this, our finest night.

"Yep," Schwartz parried wittily, hoisting his glass high and slopping a little bourbon on his pants as he did so.

Swiftly, I brought the bourbon to my lips, intending to down it in a single devil-may-care draught, the way Gary Cooper used to do in the Silver Dollar Saloon. I did, and Schwartz followed suit. Down it went — a screaming 90-proof rocket searing savagely down my gullet. For an instant, I sat stunned, unable to comprehend what had happened. Eyes watering copiously, I had a brief urge to sneeze, but my throat seemed to be paralyzed. Wanda and Clara Mae swam before my misted vision; and Schwartz seemed to have disappeared under the table. He popped up again — face beet-red, eyes bugging, jaw slack, tongue lolling.

"Isn't this romantic? Isn't this the most wonderful night in all our lives? I will forever treasure the memories of this wonderful night." From far off, echoing as from some subterranean tunnel, I heard Wanda speaking.

Deep down in the pit of my stomach, I felt crackling flames licking at my innards. I struggled to reply, to maintain my elan, my fabled savoir-faire. "Urk ... urk ... yeah," I finally managed with superhuman effort.

Wanda swam hazily into focus. She was gazing across the table at me with adoring eyes. 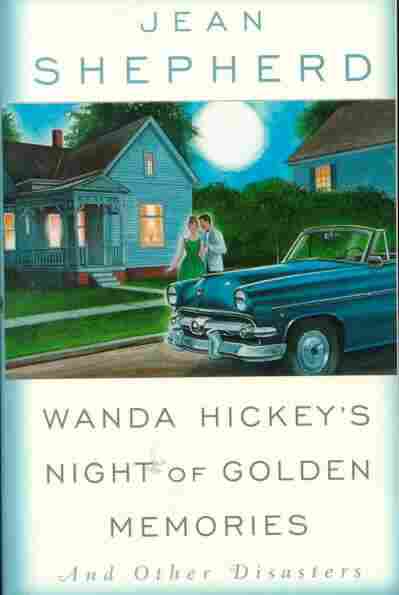