Accessibility links
Sarah Jessica Parker, from 'Sex' to Sensibility This spring, Sarah Jessica Parker returns to the big screen with a romantic comedy and a Sex and the City reprise. While she enjoys playing fashionista Carrie Bradshaw, the actress relishes her "rather dull" home life as a wife and mother. 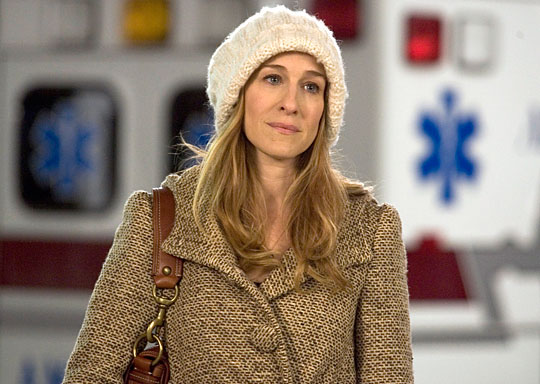 Sarah Jessica Parker talks about the shoes she wears in "Smart People."

The actress discusses how she sees her career evolving and whom she admires.

Sarah Jessica Parker and Dennis Quaid share a moment in the hospital.

Sarah Jessica Parker is back on screen this spring.

In May, the actress will reprise her role as fashionista Carrie Bradshaw when Sex and the City struts onto the big screen.

But first she's in a smaller film, playing a very different single gal.

In the romantic comedy Smart People, opening Friday, Parker trades in her designer duds and stiletto heels for sensible pumps and a lab coat.

She plays a 40-something emergency-room doctor who finds herself falling for her former English professor, who just happens to be her patient. As a student, she nursed a crush on the tweedy, temperamental and utterly pompous professor played by Dennis Quaid.

In a conversation with Michele Norris, Parker says she wants the challenge of depicting ordinary women.

"I don't have any great interest in playing another woman who is living in a large, exciting city, who has access to fashion and is flawed and curious and likes to spend her money in certain ways," Parker says. "I got to do it with beautiful writing in that one particular way. I really just don't want to spend the rest of my career doing that.... I really love the idea of playing real women."

The Sex and the City movie, written and directed by Michael Patrick King, plays off the widely popular HBO series.

Details are scant, and Parker remains cagey: "It's grand, and it's deep and there's incredible disappointment and great laughs and still the cheeky behavior and ribald talk and conversation and language," Parker says. "But it's really about being a grown-up and what does that mean and how complicit are we in our disappointments and our failures and when friendship can no longer fix things or even distract you the way they could when you were in your 20s."

Parker has two movies coming out within two months of each other, but there may be a lull before another film release.

Parker has become more selective about projects because she's focused on spending time with her son, James Wilkie. As working actors, she and her husband Matthew Broderick used to be "just sort of conditioned to take jobs as they come along."

These days, Parker says her life is a really a "bunch of perfunctory business ... it's really rather dull a lot of my day, but I really like it."

"I like running to the market and I like e-mailing the other parents at my son's school and signing up for special snack and dropping him off in the morning ... and feeling like my house is my responsibility in a lot of old-fashioned ways."