Accessibility links
'Barley' Explores Angst of IRA's Early Days Ken Loach's film The Wind That Shakes the Barley examines the early days of the Irish Republican Army and the radical organization's impact on the Irish people. Some British papers have criticized Loach for making the movie. 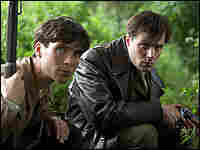 Acclaimed British director Ken Loach has gotten high praise and angry criticism for his new film The Wind that Shakes the Barley.

For Loach, the personal is always political — the political, personal. Loach is the dean of British independent filmmakers and he has the gift of finding private emotions in public dilemmas. That's just what he does with his fine new film.

Barley is set during the Irish independence movement of the early 1920s. That era is still so controversial that some British newspapers savagely attacked Loach for making this film, which stars Cillian Murphy as a young man who forsakes a medical career to join the Irish Republican Army.

In fact, the controversial scenes — which show the British Army resorting to torture — are the least-interesting aspects of this work. For The Wind that Shakes the Barley turns out to be a complicated, dramatically potent story. It's concerned not with how bad the British were, but with what the wrenching personal cost of fighting fire with fire was for the Irish.

Murphy is especially good at playing personal zealotry as well as soul-searching and regret. He shows us a man who is eaten up alive because he's forced to act in ways that are contrary to his background and his training. When he says, at one particularly painful point, "I hope this Ireland we're fighting for is worth it," it's an especially moving moment.

The life-and-death discussions between rival Irish factions are compelling, the air in the rooms electric. When the Irish have to decide whether to accept partial independence or continue fighting, the film tips its hand neither one way nor the other. Both sides have strongly thought out points of view, and hearing them expressed is thrilling.

"If you were alive at that time it must have been an agonizing choice," director Loach said at Cannes, where Barley won the Palme d'Or — the prize for best film. "There were no good people or bad people, all responses to the situation have a logic — that's the terrible dilemma."

And the source of wonderful drama, as well.

'Wind That Shakes the Barley' Site