Accessibility links
Elderly Rock Singers Put on a Good Show Los Angeles Times and Morning Edition film critic Kenneth Turan reviews the film Young at Heart. It's a documentary about a choir made up of senior citizens who perform songs by rock, punk and soul music artists.

Los Angeles Times and Morning Edition film critic Kenneth Turan reviews the film Young at Heart. It's a documentary about a choir made up of senior citizens who perform songs by rock, punk and soul music artists.

The Rolling Stones are not the only senior citizens out there singing rock and roll. And to prove it, a new documentary film opens today. It's called "Young at Heart." Los Angeles Times and MORNING EDITION film critic Kenneth Turan says it's a great show.

(Soundbite of song, "I Feel Good")

TURAN: Under the direction of Bob Cilman, these folks spend their golden years singing songs from groups like the Talking Heads, The Clash and Coldplay. They even take a crack at a James Brown classic.

(Soundbite of song, "I Feel Good")

Mr. BOB CILMAN (Conductor, Young at Heart Chorus): (Singing) …I would. And use it just like I knew that I would.

Mr. CILMAN: Can you do that? (Singing) Like I knew that I would.

Unidentified Man #1: (Singing) Like I knew that I would.

TURAN: This may sound like a glib musical gimmick, but the reality is surprising. For what the members of this chorus lack in pure ability, they make up for in irrepressible spirits and a desire to simply have fun. When, for instance, 92-year-old Eileen Hall rips into The Clash's "Should I Stay or Should I Go?" age hardly matters. The frame of Young at Heart is a seven-week pre-concert rehearsal period, during which the chorus is expected to learn some quite difficult stuff, including Sonic Youth's unsettling "Schizophrenia," and Allen Toussaint's "Yes We Can Can," which uses the word can a memory-challenging 71 times. In an organization with members this old, the question of mortality inevitably comes up.

Unidentified Man #2: (Singing) May your hands be always busy, may your feet be always swift.

TURAN: When the chorus sings Bob Dylan's "Forever Young" to an audience at Hampshire Jail at a particularly emotional moment, many of the inmates are literally moved to tears.

TURAN: The age of these singers is not some contrivance, but the heart of the matter. In a culture that venerates youth, these people having the time of their lives near the end of their lives couldn't be more refreshing. We want them to go on singing forever, most of all perhaps because we know there's no way they can.

The movie is "Young at Heart." Kenneth Turan reviews movies for MORNING EDITION and the Los Angeles Times. 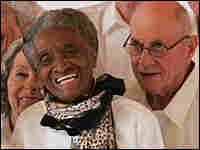 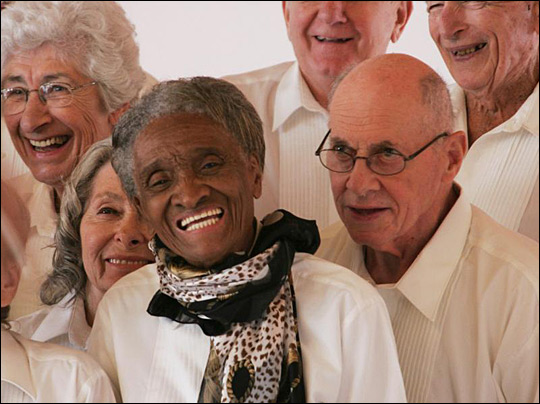 The octogenarians in the Young@Heart Singers — a sort of elder-punk concert group around which Stephen Walker has built this irresistible documentary — arrive on stage with walkers and canes. Once they get to the microphone, though, they sound a lot like teenagers.

Well, sort of. They shriek lyrics with a lot more clarity than teenagers generally do, in a repertoire ranging from James Brown to Jimi Hendrix, Coldplay to Radiohead to The Clash. The group's geriatrock stylings are often amusing, and indeed, the central conceit sounds like an extended joke.

But it cuts both ways. The song "Staying Alive" certainly resonates more piquantly when sung by these folks than it did by the Bee Gees. And who better than a group of 71- to- 92-year-olds to bring a nursing-home knowingness to the Ramones' "I Wanna Be Sedated"?

Walker formats the film predictably, letting us get to know a few of the singers during a six-month buildup to a big concert. That two of them die within a week of each other lends another sort of resonance to the event. But no one knows better than the singers that life goes on — and consequently, so does the concert.