Accessibility links
The B-52s, Bringing Back the Party From the late '70s to the early '90s, the zany dance-rock outfit did the "Rock Lobster," had its own "Private Idaho" and got together at the "Love Shack." Now, the band has produced Funplex — its first new album in 16 years.

Listen
The B-52s, Bringing Back the Party

If we're going to keep doing this, we need new material, you know? And our fans have been very patient and very generous, but they were beginning to sort of bang on the door — 'We want new songs.' 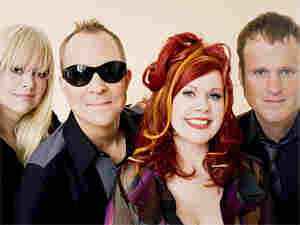 The zany dance-rock band — with its string of MTV hits like "Love Shack," "Planet Claire," "Private Idaho" and "Rock Lobster" — just issued a new album after a 16-year hiatus.

Judging from the new music, the party's still going on. Band members Keith Strickland, the group's guitarist, and Kate Pierson — who sports the sky-high red beehive — stopped by NPR West to chat about the new CD, called Funplex.

The band has been performing together with regularity throughout the intervening years, but it actually wrote new material for Funplex. Though its songs are as wacky and danceable as ever, Strickland says that he had to imagine what a modern incarnation of The B-52s would sound like.

That, and the fact that their dedicated fans were clamoring for more.

"That's what we were thinking," Strickland says. "If we're going to keep doing this, we need new material, you know? And our fans have been very patient and very generous, but they were beginning to sort of bang on the door — 'We want new songs.'"

Long after the success of their last chart-topping singles, The B-52s' members are all now in their 50s. But they say that the gyrating energy of the crowds they draw keeps them going.

"You know, when you mentioned having to perform 'Love Shack' and 'Rock Lobster' — I still enjoy performing them because there is this energy that the audience gives you," Pierson says. "It's just really entertaining, and you can feel an energy sort-of transference happening when you're on stage performing. And I see the audience just going wild. We have some kind of, I don't know, potion, something in our music that just makes people bust loose."

So does this mean that audiences can expect more new music from The B-52s — before another 16 years pass?