Accessibility links
Cooking Contest Winner Offers 'Ungarnished Truth' How do you begin to think of a dish that will wow judges' hearts and stomachs? If you're Ellie Mathews, winner of a $1 million prize in the Pillsbury Bake-Off, "it involves a fair amount of experimentation." 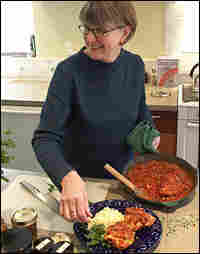 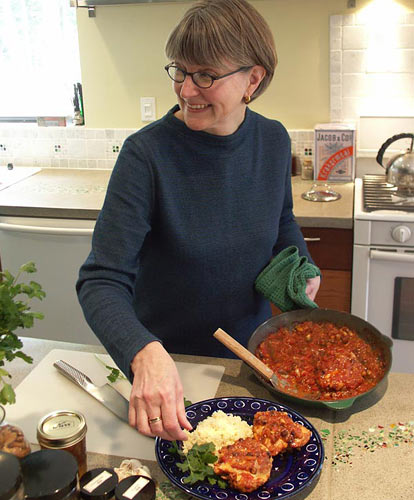 Ellie Mathews prepares her salsa couscous chicken dish, for which she won the Pillsbury Bake-Off contest in 1998.

Ellie Mathews discusses why she's uneasy answering questions about what she did with her prize money.

How do you begin to conceive of a dish that will wow judges' hearts and stomachs?

If you're Ellie Mathews, who won the $1 million grand prize in the 1998 Pillsbury Bake-Off, "it involves a fair amount of experimentation and just trying to dream up what could I do with a can of biscuits that nobody ever did before."

That experimentation can result in failure — like when Mathews tried to see what would happen if she boiled a tube of ready-to-make biscuits. Why not? After all, she figured, you boil bagels and pretzels before baking them.

"I thought it might be a good idea, but don't try it," she tells Steve Inskeep.

Mathews, whose new book, The Ungarnished Truth, chronicles her rise to the top in the Pillsbury contest, nevertheless urges other cooks to give their own ideas a chance.

"When there is something that seems to come together and make something that you'd want to put on a plate and serve to someone, write it up, send it in, let the judging begin," she says.

"I typically buy ingredients that look good and wrestle them into a pan and serve a meal," she says. "I don't do a lot. I'm not a fussy cook. I don't put four kinds of sea salt into something or 18 different kinds of vinegar, or whatever. I wouldn't say I'm a plain cook, but I'm fairly practical."

When she was cooking in the Pillsbury competition, Mathews says she wasn't thinking about her chances of winning.

"I went to the contest with the idea of being in training so I could see how it works," she says. "So I could get an inside look at what the operation amounted to ... so I could go back another time in earnest."

And when she realized she had won, Mathews says she thought, "Oh, no. I can't come back. I knew I had been disqualified by virtue of winning the grand prize."

This year's Pillsbury Bake-Off gets cooking this weekend in Dallas. 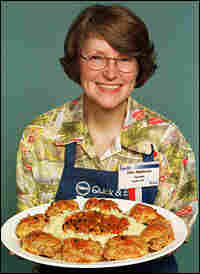 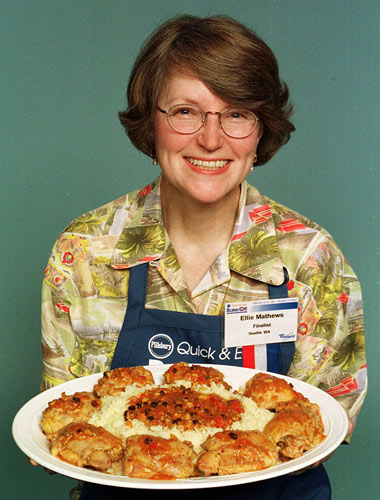 1. Cook couscous in water as directed on package. Cover to keep warm.

3. Add garlic to skillet; cook and stir 30 seconds. Add chicken; cook 4 to 5 minutes or until browned, turning once. 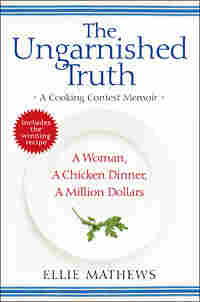 Months before, when recipes had poured into Pillsbury's mail room by the tens of thousands, the first level of judging was necessarily on paper. I guess if a recipe didn't read well, the assumption was that it wouldn't eat well. When I had typed mine to put in the mail, I imagined neatness would count, that a well-designed and carefully laid out page would make a difference. Wandering around the contest floor, however, gave evidence to the contrary. Some of the photocopies taped to finalists' counters had been submitted in difficult penmanship; others were poorly typed.

Mine, in a favorite—but neutral—typeface called Optima, had the recipe name at the top in all caps. Having worked as a graphic designer, I probably fussed more over the appearance of my entry than the recipe itself. I didn't like the name I'd dashed off, but I hadn't been able to think of anything witty. Salsa Couscous Chicken didn't exactly roll off the tongue, but at least each of the three words carried its own, descriptive weight.

Although this entry was a last-minute afterthought to the other submissions on which I'd spent more time and attention, I would not say its ingredients were selected at random—not because I had any edge on how to make it to the Bake-Off but because they are food items I generally I keep on hand and feel comfortable using.

Recognizing that cooks across America might not routinely stock couscous in their pantries, I tried some sleight-of-hand that I'd noticed while reading past winning recipes. At the head of my ingredients list I wrote, 3 cups hot, cooked couscous (rice may be substituted if couscous is not available). By saying "cooked," I didn't have to repeat instructions for how to prepare a product that usually comes with instructions. And the suggested rice substitution was to get me off the hook with any judge who might have thought couscous was too exotic an ingredient.

Next came my nine other ingredients. Contest rules had it that everything should be listed in order of use.

Olive oil. If someone didn't get the message with the couscous that this recipe has Mediterranean roots, this was intended to help set the stage. Any old vegetable oil would have probably done the trick, but olive oil was thematic. Besides, that's what I keep next to my stove.

Chopped almonds. These could have just as easily been pine nuts, which might have been more authentic in the North African sense, but which seemed potentially more risky in terms of middle American acceptance. They are also not as widely available as almonds and they're pricier, too. I wanted to believe it would work in my favor if I kept a lid on the cost of ingredients.

Garlic cloves. I called for fresh.

Eight chicken thighs, skin removed. Because it has a higher fat content, chicken dark meat is more forgiving than breast meat. Since it's impossible to predict who's going to stick a microphone in your face at a critical moment while cooking under the spotlight, I thought it best to go with the most flexible ingredients possible, ones that are hard to ruin. In my experience, chicken breast meat has a twenty second window between being undercooked and turning into hard, dry, mealy clunks. Besides, thighs were what I had rattling around in the back of the freezer the day I first threw the recipe together. Why change what already works?

Old El Paso Homestyle Garden Pepper Salsa, mild or medium. I couldn't decide, so I left the option open. Piquancy is such an individual matter of taste. For the contest I flipped a virtual coin and asked for mild. In the Bake-Off cookbook, Pillsbury suggested Thick 'n Chunky as an alternate.

Dried currants. Zante currants and raisins are both little brown shriveled things. Except for the fact that a raisin is about ten times the size of a dried currant, one could think them interchangeable. To me they are not. When plumped and wet, I find raisins a bit on the squishy, baggy side. On the other hand, dried currants, when plumped, stay satisfyingly globular sans wrinkles. Technically, I should have distinguished the dried Corinth grapes that become Zante currants from actual currants, which are not grapes at all, but extremely tart berries—either red, white, or black—that are typically used fresh or made into jam or jelly. To add to the complication, the larger dried Thompson seedless grapes that we generally call raisins are called sultanas in other parts of the English- speaking world, but I wasn't using any of those.

Honey. I probably could have specified granulated sugar—or blackstrap molasses, for that matter—to achieve the same outcome, but, as with the olive oil, honey was thematic and intended to bolster the Moroccan theme. I called for a tablespoon, but this measure was an estimate, since I generally squirt out a glob and eyeball the amount rather than sticky up a spoon.

And, finally, the seasonings. Here, there could be no substitutes. Cumin and cinnamon in concert practically scream North Africa, and they are powerful enough to grab the Mexican-ness of the salsa by the throat and force it into submission. I can't take credit for any of this. The recipe for braised halibut with Middle Eastern spices that I had clipped from the Seattle Times years before provided my inspiration.

It might be easy to surmise, based on the components of my recipe and their analysis, that I knew precisely what I was doing when it came to entering the Bake-Off. But I didn't. My choices were the result of having put some sort of functional dinner on the table most nights over the three-plus decades that I'd been a mother and/or somebody's wife. Add to my on-the-job experience an inclination to be opinionated about food. Add to that my general impatience and a willingness to experiment and the results are invariably no-fuss but with a twist. I guess you could call me a something-from-nothing cook, always of the belief that the components of a meal are to be found somewhere between the pantry and the fridge. I rarely compile a shopping list; I never write out a week's menus. I go to the market, buy what looks good, and figure out how to put it all together once I'm home. So far, that system has worked out for me. Someday I may get caught having to make a four- course meal out of a can of clams, half a jar of Gerber's strained prunes, three dill pickles, and an artichoke.

In a 9 or 10 inch skillet, lightly sauté the almonds in the oil. Push almonds to one side. Add garlic. Stir and cook for 30 seconds or so. Add chicken thighs and brown over medium high heat for about 4–5 minutes, turning once.

Add salsa, cumin, cinnamon, honey, currants, and water. Stir well. Reduce heat to medium. Cover and cook for fifteen minutes or until juice runs clear from chicken when pierced with a fork.

Serve with couscous (or rice). Serves 4.

This is exactly how I cooked in Orlando. Step-by-step, I followed the recipe as I'd written it. I had to. Monitors were lurking around to make sure none of us pulled a fast one. Not that I would have changed a thing.

Actually, I would have changed one thing: my presentation. Not having called for a garnish was going to count against me big time. But I accepted my fate. My recipe had gotten me to Orlando and that had been my goal, pure and simple. I reminded myself I was at the Bake-Off on reconnaissance, gathering intelligence for next time when I'd do things right.

From The Ungarnished Truth by Ellie Mathews. (Berkley; March 2008) 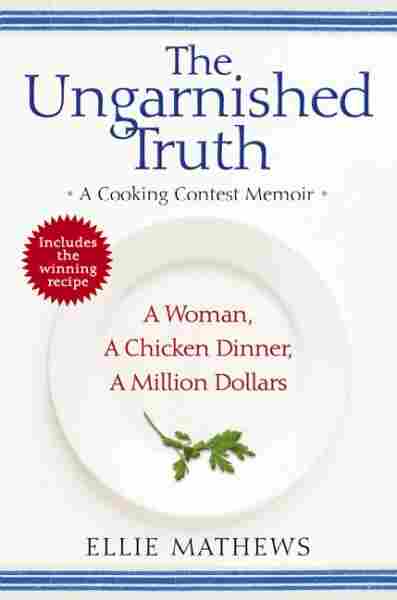