Accessibility links
Was (Not Was) Still Is For nearly 30 years, David Weiss and Don Fagenson have melded funk and absurdity as Was (Not Was). They talk with Scott Simon about their latest album, Boo!, the first in more than 15 years.

Listen
Was (Not Was) Still Is

Green Pills in the Dresser 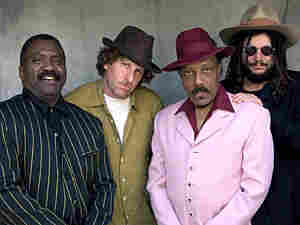 Throughout the band's career, Was (Not Was) has played satirical funk and R&B tunes. Ellen Stone hide caption

For almost 30 years, David Weiss and Don Fagenson, along with a rotating cast of musical pranksters, have melded funk and absurdity as the band Was (Not Was).

The group has just released a new album, Boo!, its first new release in more than 15 years. Bandleaders Weiss and Fagenson — a.k.a. David Was and Don Was, respectively — joined Weekend Edition Saturday's Scott Simon from the studios of NPR West to discuss their unique music.

"I'm victim of a kind of seduction of the phrase," Weiss says. "I'm surprised as anybody by what comes out. Just hopefully it's absurdist enough, with one little pivot foot in reality to be interesting."

Weiss and Fagenson are childhood friends from Detroit — the city that inspired and created the soul of Motown and George Clinton, as well as the punk-rock fire of Iggy Pop and the MC5.

It was Fagenson who came up with the band's name after being inspired by his then-3-year-old — who, as Weiss recalled, "was discovering what I think was Piaget's reversibility thinking, saying things like, 'Hot, not hot' and 'Blue, not blue.' And Don said, 'We'll be Was (Not Was), and I'll be Don Was and you'll be David Was' — thinking, 'Well, it's as good a thing as any to have on the tape box when it gets rejected.' "

Throughout the band's career, Was (Not Was) has played satirical R&B tunes, including "I Feel Better than James Brown" and the 1988 hit "Walk the Dinosaur."

In the time since the group's last album, Fagenson went on to produce records for The B-52s, The Rolling Stones and Willie Nelson, as well as Nick of Time, the album that reinvigorated Bonnie Raitt's career and won an Album of the Year Grammy. Weiss also contributed to projects for such jazz greats as Freddie Hubbard and Sonny Rollins.

The two say that contributing and producing records by other artists has informed their own work.

"Having worked with some singers whose instruments I thought were enough so that you didn't have to produce much, you'd be a genius by walking in with like Rickie Lee Jones," Weiss says. "And I realized, whether it's Rickie or Joni Mitchell or Bob Dylan, that the ratio between their presence, their ability to communicate — call it what you will: that charisma, that life force — you need less production per unit of that X factor."

Boo! contains many songs that the band had had sitting around for years. "We just worked on it for a very long time," Fagenson says. "If we hadn't gotten a new record deal, we'd probably still be working on it. It was really having a deadline that made us stop."

Still, after such a gap between records, their only real concern, according to Fagenson, was that there'd be a consistency to the sensibility. "Our global perspective may change over the years," he says, "but at any given [moment], pretty much who we are on the record is who we are."

Album
Boo!
Artist
Was (Not Was)
Label
Rykodisc
Released
2008