Accessibility links
Kathleen Edwards: Acoustic 'Flowers' The Canadian singer-songwriter, who draws from familiar country-rock and folk traditions, recently released Asking for Flowers, her third album. Now back on tour, she recently made a stop to play a few acoustic renditions of new tunes.

I Make the Dough, You Get the Glory

Audio Extra: On 'Asking for Flowers' 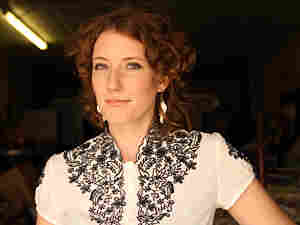 Kathleen Edwards met her husband, Colin Cripps, when he came into her band as a replacement backup guitarist. Todd V. Wolfson hide caption

When Kathleen Edwards surfaced in the U.S., the Canadian performer was hailed as one of the most distinctive singer-songwriters to emerge in years. Her debut and sophomore releases were critical favorites, lauded for their blend of familiar country-rock ideas and folk sensibilities.

Edwards is back in the U.S. again, touring in support of a new album called Asking for Flowers. When she stopped in Portland, Maine, she dropped by radio station WMEA to chat with Day to Day host Alex Cohen. She also played a few tunes with her guitarist, Colin Cripps.

In addition to being a musical collaborator, Cripps is also her husband. He and Edwards met when he showed up to fill in for her regular guitarist.

"My manager said, 'Well, there's this really great guitar player that you know of named Colin Cripps,'" Edwards says. "'And you can't afford him, but it's for a couple shows, so let's see if he can come and do these shows.' And as it turned out, he had heard my first record and was interested in coming and playing.

"So yeah, he came in, and we rehearsed, and then he never left. He's since thankfully lowered his rates."

Together, they perform a tune called "The Cheapest Key," which Edwards warns contains a few curse words. In fact, she says she doesn't hide her love of swear words on Asking for Flowers — but that she's learned to temper her enthusiasm.

"My camp counselor once put it like this," Edwards says. "She said, 'The reason that you swear a lot is because you're not smart enough to fill in the blanks with words that you don't know.' And I thought that was actually a great point. And from that point forward, I realized that I didn't want to be gratuitous in my cussing. And that it actually is a lot more interesting to have words that have the same meaning, but they're legal."

Edwards also took inspiration from the story of Alicia Ross, a young woman from Edwards' native Ontario who went missing in 2005. It was later discovered that Ross was murdered by her next-door neighbor.

Asking for Flowers contains a track called "Alicia Ross." "Part of the reason I think I was so struck by this story was because I really just saw my mother," Edwards says. "You know, how could a parent get up out of bed every morning after knowing that that's the fate that their child met? And all the years that they spent nurturing their child, and trying to keep them safe, and protected."