Accessibility links
A Pricey Investment, Even for Jay-Z Last week, reports emerged of a deal between rap mogul Jay-Z and concert promoter Live Nation. It's said to be worth as much as $150 million over 10 years. But some observers wonder if Live Nation is getting its money's worth.

Listen
A Pricey Investment, Even for Jay-Z 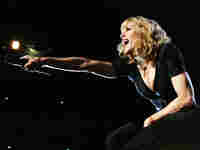 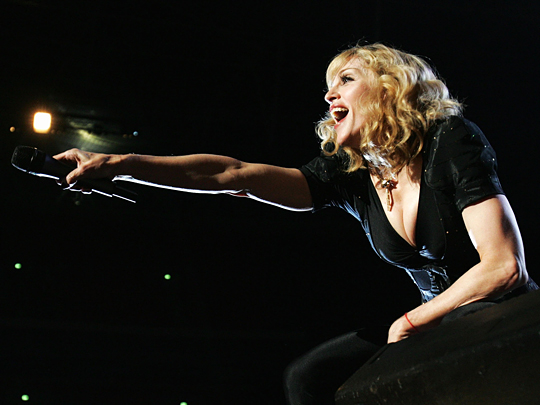 Madonna performs on stage in London during the Live Earth concert of 2007.

It's not like you banked on the wrong person. But did you do it at the right time, with the right numbers? 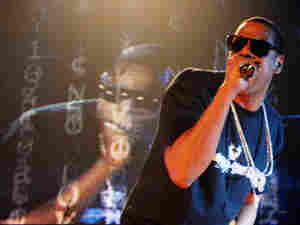 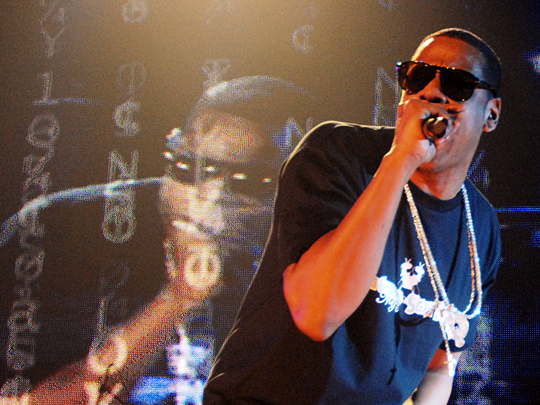 To his many fans, Jay-Z's story is a familiar one — one he often tells in rhyme. The rapper, born Shawn Carter, hustled his way from a Brooklyn housing project to the top of the charts.

That was just the beginning. Jay-Z then launched his own record label, his own clothing line, his own nightclubs — basically, his own lifestyle brand. Jupiter Research analyst Michael Green says that's what concert promotion agency Live Nation is after.

"They know it's not just music that's making money for these superstars," Green says. "It's their movies, apparel — all the other things they can market in addition to what made them famous to begin with."

Last week's reports of a mega-deal between Jay-Z and Live Nation are still reverberating through the record industry. The ink hasn't dried yet, but the complex agreement is reported to be worth as much as $150 million over 10 years. It's only the latest big-name signing by a company that's eager to sell more than just concert tickets.

And it's not just superstars. Musicians at all levels of the industry long ago figured out that touring and merchandising are the ways to make money.

"Historically, an artist's touring and merchandise revenues were kept by the artist," says Gary Bongiovanni, editor of Pollstar, the concert industry trade magazine. "Artists today make much more money from their touring and any related merchandise sales on the road than anything from recorded music."

Record labels traditionally keep the lion's share of record sales. With those sales plummeting, labels are looking for a cut of the touring and merchandising money.

And so is Live Nation, the world's biggest concert promoter. While the concert business is good, Michael Green says Live Nation also takes a lot of risk and spends a lot of money on overhead, including venues and publicity.

"It's a low-margin business," Green says. "It's a very tough business to be in. It's hard to find superstar artists who want to tour all the time. And the idea is, they can find new revenue streams that are potentially more lucrative."

So Live Nation is paying handsomely for a foothold in those other businesses. Last year, the company signed a so-called "360-degree" contract with Madonna that gives Live Nation a share in all of the singer's revenues — for a reported $120 million over 10 years. The Jay-Z deal is reported to be worth even more: $150 million.

That's a number that would tempt any artist to hand over control of his or her touring revenues, says New Yorker pop critic Sasha Frere-Jones. "It sounds like one of those numbers that somebody made up," Frere-Jones says. "Like they were at dinner. And they wanted to impress [Jay-Z]. And he said sure, because, you know, he's not stupid."

Neither is Live Nation, Green says. "That we're sitting here talking about Live Nation, the concert promoter, is truly an important move for them," he says.

Live Nation declined to comment before the Jay-Z deal is signed. The company was formed three years ago out of what used to be Clear Channel Entertainment. Live Nation's publicity materials refer to it, not so humbly, as the "future of the music business."

But Frere-Jones says the strategy of spending big money on aging talent resembles nothing so much as the past. "It's not like you banked on the wrong person," he says. "But did you do it at the right time, with the right numbers?"

To Frere-Jones, the Jay-Z and Madonna contracts look a lot like the mega-deals of the 1990s, when record labels threw hundreds of millions of dollars at artists whose best work was behind them.

Singer Whitney Houston has released just two lackluster albums since signing a $100 million contract with Arista Records in 2001. Live Nation is betting that Jay-Z, 38, still has more in the tank. The rapper told The New York Times that he is "the Rolling Stones of hip-hop" — meaning he can keep playing packed arenas into middle age and beyond.

But Frere-Jones says the rapper's track record suggests otherwise. "You gotta wonder about a guy who's never gone on a huge tour, really," he says. "Not the way that U2 tours. Not the way the Stones tour. That's not something I imagine Jay-Z doing."

Of course, Frere-Jones admits he's underestimated Jay-Z before. He didn't think the rapper's clothing line would go anywhere. Last year, Jay-Z sold the rights to Rocawear for $200 million in cash.