Accessibility links
The Raconteurs: New Music for Old Friends The rock group, led by Brendan Benson and Jack White, recently surprised the rock world by releasing its new album on one week's notice. But the two guitarists surprised themselves with the new musical identity they forged.

Many Shades of Black 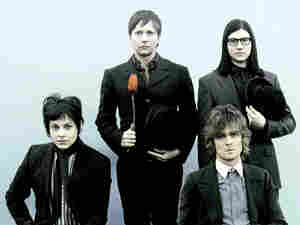 Jack White is the colorfully clad frontman of the fiery hard-rock duo The White Stripes. Brendan Benson is a songwriter with three full-length solo albums to his credit.

Together, the old friends lead a quartet that both insist isn't just a side project. The Raconteurs recently awakened the rock world with the surprise release of a second album, called Consolers of the Lonely. It represents a new identity for both musicians.

"Well, it gets tough," White says. "I thought it would be a little easier to switch gears like that, and it wasn't as easy as I thought it was. It was totally changing my entire attitude towards how to perform. But it's really worth it, because it's pushing me to learn more about what I do."

White and Benson sat down with Lynn Neary to explain their musical ideas.

"The name of the band is The Raconteurs," White says. "And that means a really good storyteller. And I have always been somebody who's — in regular life, just socially — I'm not good at telling stories. So it's always been a struggle to try to figure out a way to do that, and I guess on stage is the only place I feel I can actually get away with it."