Accessibility links
Obama, Clinton Battle for Pennsylvania The fierce contest between Sens. Barack Obama and Hillary Clinton for the Democratic presidential nomination continues in Pennsylvania, site of the next primary contest on April 22. On Wednesday, the two candidates will debate in Philadelphia.

The fierce contest between Sens. Barack Obama and Hillary Clinton for the Democratic presidential nomination continues in Pennsylvania, site of the next primary contest on April 22. On Wednesday, the two candidates will debate in Philadelphia.

NPR national political correspondent Mara Liasson, who was in Pennsylvania this week, talks to Scott Simon about the state of the race. 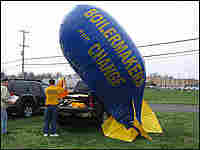 Fred Chamberlain attempts to inflate a 'Boilermakers for Change' blimp across the street from an event in Levittown, Pa., for Illinois Sen. Barack Obama. Evie Stone, NPR hide caption 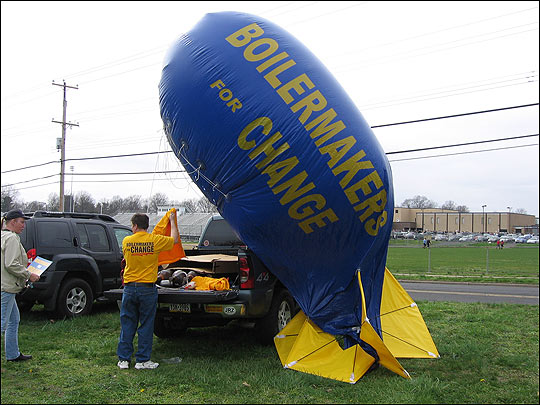 Fred Chamberlain attempts to inflate a 'Boilermakers for Change' blimp across the street from an event in Levittown, Pa., for Illinois Sen. Barack Obama.

The next presidential primary for the Democrats is in Pennsylvania on April 22. It's a state that appears to be tailor-made for New York Sen. Hillary Clinton: Its residents are whiter, older and less educated and affluent than the rest of the country.

Clinton is counting on her strongest supporters — white working-class voters — to help her win the state. But Illinois Sen. Barack Obama, who has built his string of victories with the support of upscale affluent voters, is now trying hard to win support from the so-called "lunch-bucket" Democrats.

Hard-pressed communities like Levittown, Pa., have been the bedrock of Clinton's support. The working-class suburb of Philadelphia was built in the 1950s for returning World War II veterans who wanted a house, a yard and a nice place to raise their kids. The residents held good jobs at nearby steel mills, rubber plants and car factories, but many of those jobs are gone now.

Obama is trying to make inroads with these lunch-bucket Democrats, and residents like Fred Chamberlain, the vice president of the local boilermakers union, are campaigning for him.

Chamberlain says he has encountered some resistance, in part because of Pennsylvania voters' nostalgia for the economic prosperity of the 1990s.

There is something else Chamberlain encounters when he canvasses door to door for Obama in Levittown: the issue of race. "As we get out here, we hear all the time, 'You know, I'm not so sure about voting for an African-American,'" he says.

On a recent night at Bailey's Bar and Grille in Levittown, the place was filled with the type of voters Clinton can depend on and Obama wants to win.

Michael Shefmyer, the bouncer, supports Clinton. "She just seems more in touch with people than Barack Obama does," he says.

But plumber Bill Goldy says he is inclined to support Obama. "He doesn't take contributions from the — what do you want to call them? — the lobbyists. It's just time for a change, you know. She was already there. She made her money. The Clintons made $109 million since he left office."

Clinton is still ahead in the polls in Pennsylvania, but her lead is shrinking, and Obama's efforts to reach out to voters in working-class suburbs like Levittown may help him narrow the gap.

If Obama ends up winning the nomination, he may need these core Democratic voters in November much more than he needs them on April 22. Clinton has said Obama will be a weak nominee because he cannot connect with white working-class voters, and Democrats need to carry those voters in order to win big swing states like Ohio and Pennsylvania.