Accessibility links
Iranian Women Activists Gain Momentum Women's protests have been gaining momentum in Iran for the past several years, in part because of several outspoken female activists. They fight against Islamic laws that allow for the stoning of women and inequality with men. 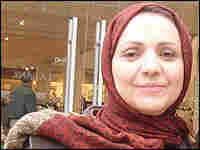 Fariba Davoodi Mohajer, 43, is one of the leaders of the women's movement in Iran. Davar Ardalan, NPR hide caption

Scroll down to read profiles of Iran's female activists.

More on This Issue

Women's protests have gained momentum in Iran over the past several years, in part because of extraordinary female activists.

They fight against Islamic laws that allow for the stoning of women and inequality in the areas of pay, child custody, divorce and inheritance.

Fariba Davoodi Mohajer, 43, is one of the most outspoken leaders in Iran. A diminutive, almost winsome blonde, Mohajer is no stranger to arrest: She was summoned and interrogated on the eve of an important protest last June.

Mohajer speaks with Jacki Lyden about the women's movement in Iran.

She and four other women were charged with acting against national security, propaganda against the state and giving interviews and disseminating falsehoods. Her trial is ongoing.

Currently in Washington, D.C., visiting her daughter, Mohajer knows that she might be arrested upon her return to Iran.

In the past, Iranian activists were prohibited from leaving the country. Now, they are encouraged to leave, but often with open court dates on their charges. When activists leave, they're re-arrested and jailed, sometimes for years.

It is a subtle way of eroding dissident leadership.

Still, Human Rights Watch reports that the pace of protests in Iran has quickened.

This piece was produced by Davar Ardalan.

Since this story aired, two women in solitary confinement, Mahbubeh Abbasgholizadeh and Shadi Sadr (profiled below), were released from Tehran's Evin Prison.

The women's movement has been gaining momentum in Iran, due to the activism of several key leaders, some of whom are profiled below. Reprinted with permission of Human Rights Watch.