Accessibility links
Ex-Spy Plame Wilson: Leak Was 'Purely Political' Valerie Plame Wilson, the CIA agent at the heart of the recent White House scandal, testifies before the House Oversight Committee. "My name and identity were carelessly and recklessly abused by senior government officials in both the White House and the State Department," Wilson said. 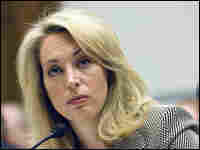 Former CIA agent Valerie Plame Wilson testifies about the outing of her name while she worked as a covert agent for the CIA in 2003. Mannie Garcia/AFP/Getty Images hide caption

Valerie Plame Wilson, the former CIA operative who was publicly identified through leaks to the media that were later traced to the White House, told a congressional panel Friday that her identity was "carelessly and recklessly abused by senior government officials in both the White House and the State Department."

Plame Wilson was an undercover agent when her identity was revealed in 2003. She appeared Friday before the House Oversight and Government Reform Committee.

Her husband, Ambassador Joseph Wilson, went public with his criticism of the Bush administration's reasons for going to war in Iraq. Soon, Plame Wilson's identity as a CIA agent was leaked — as part of a campaign, she said, to discredit her husband.

The testimony about "outing" an undercover agent marked the first time Plame Wilson has spoken publicly about the scandal since her identity was revealed more than three years ago.

Rep. Tom Davis of Virginia, the panel's senior Republican member, sprang to the defense of President Bush and his associates, asking how any of them could really know that Wilson was a covert operative.

"If the agency doesn't take sufficient precautions to protect the identity of those who engaged in covert work, no one else can do it for them," Davis said.

Wilson replied that it's the assumption of CIA officers that foreign entities would seek to reveal their identities, and that it was a terrible irony that in fact administration officials destroyed her cover[. She attributed her outing to] "purely political motives."

Rep. Stephen Lynch, a Democrat from Massachusetts, asked about allegations that Plame Wilson had arranged for her husband to travel to Niger, where he found no evidence to support President Bush's claim that Iraq was trying to buy nuclear materials.

"I want to ask you now under oath," Lynch said. "Did you make the decision to send Ambassador Wilson to Niger?"

"No," Plame Wilson replied. "I did not recommend him, I did not suggest him, there was no nepotism involved; I didn't have the authority."

Rep. Henry Waxman of California, the chairman of the House Oversight and Government Reform Committee, is pledging a further exploration of the White House's role in leaking Wilson's name.

A federal probe of the case led to the conviction of Vice President Cheney's top aide, I. Lewis "Scooter" Libby, on charges of perjury and obstruction of justice.