Accessibility links
Replay: The Evolution of Video Game Music Early video game music wasn't symphonic, but it was effective. Video game composition has become a power unto itself, with its ability to guide the player. As Andrea Seabrook reports, the themes are now played by orchestras in concert halls.

Early video game music wasn't symphonic, but it was effective. Video game composition has become a power unto itself, with its ability to guide the player. As Andrea Seabrook reports, the themes are now played by orchestras in concert halls.

So Alison, over the past decade video game composing has become big business. You know the music you hear if you play a video game? Please I play a lot of video games, let me tell you. I really like that music. The soundtracks to games have been released on their own, just like a movie score. And symphony orchestras are now performing the music in concert. Our friend and host of Weekend All Things Considered on NPR, Andrea Seabrook, reported on how video game music has come so far.

ANDREA SEABROOK: This is "Pong." It was one of the first arcade games. The players hit a ball back and forth across the centerline. Its sound is not exactly symphonic.

Mr. JACK WALL (Video Game Music Composer): Playing all those arcade games, I never even paid attention to the music.

SEABROOK: This is Jack Wall. He's one of the top composers of video game music today. We're backstage at the Nob Hill Masonic Auditorium in San Francisco. Back in the 1980s, Jack Wall was pumping quarters into a "Pac Man" machine like everyone else his age. But Wall says the music didn't really do much for him.

Mr. WALL: It just sounded like sounds to me. However, you know all the tunes. It's so funny. The bleeps and the bloops, they kind of like invade your brain.

Mr. WALL: I don't know, like the "Super Mario Brothers" theme. You know?

SEABROOK: Can you sing it?

SEABROOK: It was catchy. It was fun. But it's not exactly serious music. I've caught up with Jack Wall and another famous game composer named Tommy Tallarico. They're in San Francisco on tour with "Video Games Live." It's a traveling show of game music, and it's played by top symphony orchestras. These guys are not kids. They're in their 40s, but they're totally hip. Designer t-shirts, jeans, sneakers. Tommy Tallarico wears a black leather motorcycle jacket. He says the music for those early games may sound trivial, but it wasn't. It was there for a reason.

Mr. TOMMY TALLARICO (Video Game Music Composer): They did a study, actually, and if you remember in "Space Invaders," you know, as the ships started to come down, the aliens, dun, dun, dun, dun.

Now, they'd do the same studies without the sound, and the people wouldn't panic as much. It goes to show and prove how significant audio and music are. It's not a passive, you know, linear medium like film or television, but when you're interactive like that it brings it to such a higher level for the senses.

SEABROOK: This is the purpose of all great music, Tallarico says, to change your heart rate, to move you, make you feel. At this point, though, video game music was still very limited by the computers the games were played on. PCs and game systems weren't powerful enough to handle much more than simple electronic melodies. The processing power they did have was dedicated mostly to the game. The music was background. Still, composers started drawing from more serious influences. Take "Tetris."

SEABROOK: This simple puzzle game swept the country in the early '90s. Its music comes from a Russian folk song. Then came a quantum leap in technology, the CD-ROM. Suddenly, games could have detailed video, whole animated scenes and music, real music.

SEABROOK: This is "Myst." It came out in 1993. Jack Wall says it was the first time he realized the power of music in video games.

Mr. WALL: It was a funny game because it was the first time you ever played a game and had no idea what you were supposed to do. Remember? I don't know if you remember playing it, but you put the CD-ROM in, you hit start, and you hear the main theme. And it's dah, dah, dah, dah, and you have no idea what to do. And then you'd come up to something new and suddenly this mysterious piece of music, it was kind of like a clue, like, oh, I need to do something here. So, it kind of led you though this world, and the music very much is so important to that.

SEABROOK: This music is complex. It's sophisticated. And it's a powerful part of the game's design. From here on, video game music is more and more symphonic. Jack Wall went on to score the third and fourth installments of the "Myst" series. A major influence, Carl Orff's "Carmina Burana."

SEABROOK: Now this is Wall's theme for "Myst III."

SEABROOK: Game music had gone from bleeps and bloops to this.

Whereas a game designer will come to me, and they'll say, you know what? Here's the situation. We have a hundred guys on horseback with swords all coming to attack you. Write me a three minute piece of music. Now my barriers are broken down. Now ideas are in my head and I can start to create.

You know, video game music isn't passive. It's not background music. We're foreground music, you know? And it's for this reason why I've always said that if Beethoven were alive today, he'd be a video game composer.

MARTIN: NPR's Andrea Seabrook reporting. A link to the whole story is online at npr.org/bryantpark. 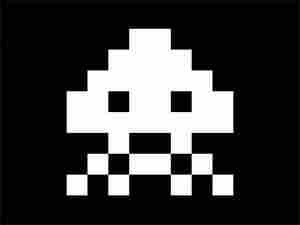 Video game music has come a long way since Space Invaders, but that doesn't make its soundtrack any less effective. hide caption

In May 2004, a composer named Nobuo Uematsu joined the Los Angeles Philharmonic for a single performance of his most famous work. The show sold out in three days. In fact, there was almost a riot at the box office when people couldn't get tickets.

What was the music? Uematsu's soundtrack for the popular video game Final Fantasy.

In the early 1970s, video game music wasn't exactly symphonic. Case in point: Pong. The players hit a ball back and forth across a center line with that now-recognizable onomatopoeic sound.

"Playing all those arcade games, I never even paid attention to the music," Wall tells host Andrea Seabrook. "It just sounded like sounds to me. However, you know all the tunes. It's so funny. The bleeps and bloops, they kind of invade your brain."

It's catchy and it's fun, but it's not exactly serious music. However trivial these early video games' soundtracks may seem, they weren't serious for good reason. And there's a study to prove it.

The Function of Video Game Music

Video game composer Tommy Tallarico explains, "If you remember in Space Invaders, you know, as the ships started to come down, the aliens, and as they got closer and closer, the sound got faster and faster. Now, what the game programmers did was that they took the person's heart rate, and as they're getting closer and closer, people would start to panic. Now they'd do the same studies without the sound, and the people wouldn't panic as much. And it goes to show and prove how significant audio and music are."

Like the purpose of all great music, it's supposed to change your heart rate — to move you and make you feel. Video game soundtracks began to take influence from more serious places, like the Russian folk song in Tetris. But still, video game music was limited by its hardware. That changed with the CD-ROM.

As personal computers became more agile and more powerful, suddenly the music track could handle something resembling real music. It was 1993's Myst that made Wall realize the power of music in a game. He says the game actually aided the player through the mysterious worlds, functioning as clues.

The complexity of the music improved to the point where the score of a video game became almost indistinguishable from the music played in the finest concert halls. Wall went on to score the third and fourth installments of the Myst series, and he based the main theme for Myst III on Karl Orff's Carmina Burana.

Tallarico explains that video game music isn't a passive experience, but an integral part of the foreground. "It's for this reason that I've always said that if Beethoven were alive today, he'd be a video game composer."

Laughing, concert violinist and self-described "video game addict" Joshua Bell says, "Uh, well, that's quite a statement to say that about Beethoven. I would not go so far."

"I have a hard time imagining that," Bell adds. "I mean, Beethoven changed the world as we know it, and I doubt he would have done that through video games. Actually, I think one of the problems with video game music is — at least with film music — yes, you have your restrictions, but of course, video game composers have their restrictions, too. They have to write three minutes here or two minutes there or... with video game music, because it's so interactive, it's actually more of a slave to what happens externally, because one doesn't know what's going to happen in a video game. So for a composer, I would have thought it was quite the opposite."

Still, Bell does see the field as becoming "more cinematic and more interesting," and he says he hopes to play on a video game score someday.

Concert halls around the country took note, and in 2005, Wall and Tallarico launched Video Games Live. The event features some of the world's finest orchestras performing some of the world's most popular video game music. For the first time in years, professional musicians are receiving the kind of audience energy they've craved.

"It's like their field day," Tallarico says. "The one day a year where they can kind of loosen their collars a little bit and have fun. And they're playing to a whole brand-new audience, which is great for everyone."