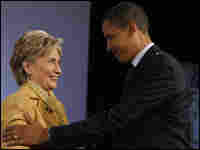 Sens. Barack Obama (D-IL) and Hillary Clinton (D-NY) both visited a Christian college in Grantham, Pa., Sunday for a CNN-sponsored faith forum. But even at an event focused on religion, Politico columnist Roger Simon says politics took the front seat, as both candidates continue their struggle to overcome misstatements and charges of elitism in advance of Pennsylvania's hotly contested primary.

The first question, Simons says, concerned the 48-hour fallout and damage control undertaken by Obama. In a talk in San Francisco last week, Simon says the senator suggested there was a bitterness shared by rural voters who had been failed by the political process and were out of jobs. "He's now in a difficult process of walking back" from calling such people "bitter," Simon says.

Obama's key lines, which were published on Huffington Post, are as follows: "It's not surprising then that [voters] get bitter, they cling to guns or religion or antipathy to people who aren't like them or anti-immigrant sentiment or anti-trade sentiment as a way to explain their frustrations."

"Those aren't bad things," Obama said. "That's what they have left."

Simon says Obama's struggle to clarify is a particularly delicate task in Pennsylvania, because the comments — made in San Francisco — have only added to a preexisting "sheen of elitism" that hasn't been as much of a problem for Clinton.

Simon says that in the battle of elites, if anyone has an edge, it might be Clinton — for reasons of legacy. "Her husband was the last Democrat who successfully was able to talk to what is sometimes insensitively referred to as the 'Bubba' vote or the 'Joe Six Pack' vote."

But Simon says the story that Clinton is trying to tell — that she is the girl who married the "boy from Hope" — may not be as powerful as it once was.

Simon says a most startling phenomenon of the campaign is the decline of former president Bill Clinton. "There was no more beloved figure really in the Democratic party when this race began than Bill Clinton," Simon says. "I don't think anyone still ranks him at the same stature anymore. In fact, you might have to rank him as a net minus."

The former president's latest gaffe, Simon says, was his effort to repaint his wife's contention she'd seen sniper fire on a 1994 trip to Bosnia. Clinton said on his wife's behalf that it was 11 p.m. when she tried to recall the 15-year-old trip. "Untrue," Simon says, pointing out that it was actually morning when Sen. Clinton first rehashed the story.

Even worse, Simon says, is that "this is the woman who was running a commercial with the phone ringing at three in the morning," referring to Clinton's infamous "red-phone" ad, in which viewers are asked to consider which candidate would be ready to respond to a late-night crisis.

"If she's incapable of getting her story straight at 11," Simon asks, "one wonders how ready she is to get her actions straight at 3?"

Simon is amazed that Obama's San Francisco comments drove out the sniper fire discussion, which in turn had replaced the brouhaha surrounding fiery sermons by former Obama pastor, the Rev. Jeremiah Wright. "For a nation of supposed multitaskers, we can only handle one outrage at a time."

"Every outrage drives out the other," Simon says. "We go slamming from one issue to the next as we finally work our way to the end of this long, long process."